BMG and Erika, playing together as Ectomorph, are about to do a full double LP album release on Halloween. And what you get is a magnum opus of weird, improvisational madness with machines. It’s about time – for Ectomorph, and for techno.

The teaser alone should make you excited: Doctor Who on acid on Halloween on Detroit:

Mmmm, sweet 303 and Moog, you can still sound futuristic in the right hands.

Here’s the thing: any moderately successful genre will get sucked at regular intervals into an industry that wants to polish it up and make it predictable and repeatable. And so you need people routinely shaking up that predictability. In the case of Ectomorph, that’s keeping experimentalism alive by hauling a whole mess of gear to gigs and getting a little strange. Erika and BMG are both formidable on their own at this. Put them together, and it’s like hitching two locomotives to the front of the train.

Interdimensional Transmissions, their label, is likewise good at channeling sounds both spacey and groovy and bits in between. 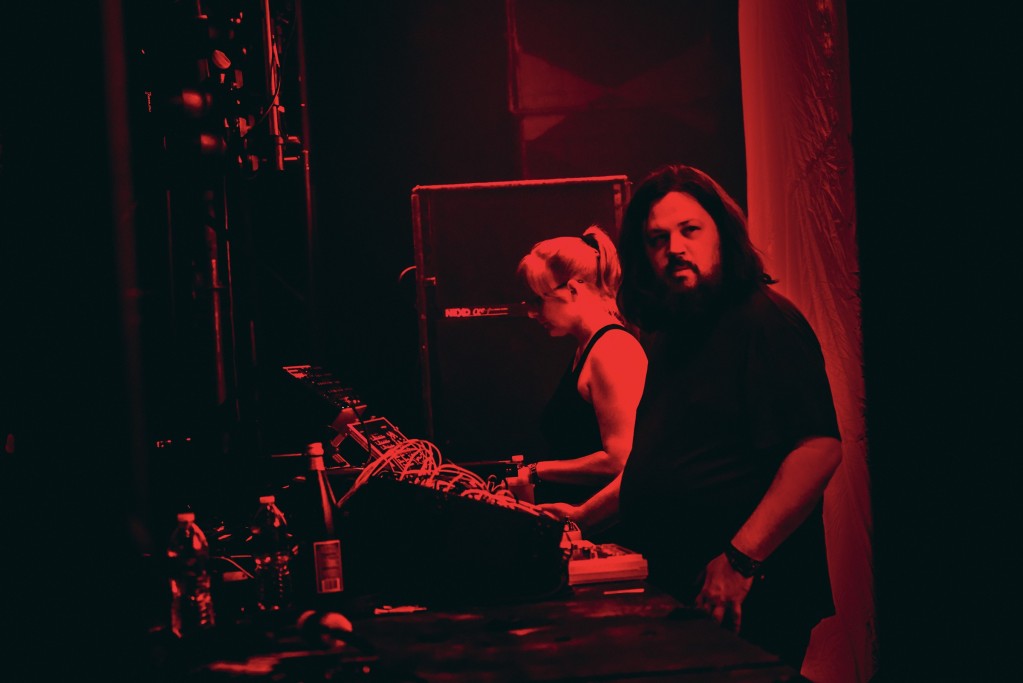 So, it’s all remarkable that Ectomorph, born in 1994, hasn’t really gotten a full-length outing. Let’s presumably blame the challenge of how to make a live act a record. The act actually was the launch release for Interdimensional Transmissions back in 1995, but by design, limited itself to Detroit-only 12″ vinyl. Now, it gets a wide release, just at the moment when the techno world needs a little less Instagram fashion brands and a little more, you know, people getting freaky with machines because it’s damned “techno,” not “sportswear catalog.” Oops, was I ranting? Sorry.

Now, how do you capture a live act’s immediacy, but make it work pressing to vinyl? For Stalker, that formula is one that has always driven great techno records – something like this:

1. Find that truly perfect groove setup.
2. Hit record.
3. Don’t do more takes. (Everything here is reportedly one or two takes.)

I can talk to these two artists a little more about that. But there’s something of the essence of techno in this approach, and it’s tough to overstate. Look, there’s nothing wrong with tracks that get worked over or micro-edited or whatever. (Yes, I’m an IDM person. And OCD. And enjoy long hours in the studio turning raw materials into something completely different.) But the roots of techno as genre have more to do with that “hit record on some groove on some machines that gets your ass shaking” than any particular superficial features of the musical outcome.

The press will make a big deal about the gear itself, because that’s something a non-musician can see by looking at the table at a gig. But I think it doesn’t matter if the groove comes from a cobbled-together pattern in FL Studio and an ElecTribe. What may well matter is that “hit record on a groove that’s working perfectly and then don’t mess with it.”

In any event, these really are perfect grooves. (I’ve heard the full length version, too, and this is definitely a top 2018 release.)

I think it’s also fair to expect this to be a highlight of Amsterdam Dance Event (ADE), where weirdo-friendly groovy techno is pushing its way into the spotlight in an event known more for overstuffed European industry scenery. The Bunker had their outing here in Amsterdam yesterday with No Way Back party figures like Derek Plasaiko and Bryan Kasenic, and you get Ectomorph, aligned with Berlin stalwart Tresor, on Saturday, along with other fine techno improvisers. (Midwest techno’s flag is flying with the likes of Noncompliant Saturday, too.) Sounds good to me.

Regarding No Way Back parties:

Here are some space-y solar Moog sounds by Erika

And it’s Thursday, I know, but:

This extended techno mix will get you through any Wednesday

awesomeness
Make your own MIDI-to-CV adapter in a skull, with a 3D printer and CircuitPython
experimental
A five-story pyramid is backdrop for Kyiv’s music artists and queer performers
albumsreleases
Remute’s Unity album looks glorious on Game Boy Advance, in art and music
detroit
Modul8, new synth magazine from Australia, packed with interviews and features – on paper