The leak was real. Akai have a standalone box that can free you from a laptop, when you want that freedom. It works with your computer and gear, but it also does all the arranging and performance (and some monster sounds and sequencing) on its own. It’s what a lot of folks were waiting for – and we’ve just gotten our hands on it.

Akai have already had a bit of a hit with the latest MPCs, which work as a controller/software combo if you want, but also stand on their own.

The Akai Force (it’s not an MPC or APC in the end) is more than that. It’s a single musical device with computer-like power under the hood, but standalone stability. It’s a powerful enough sequencer (for MIDI and CV) that you some people might just buy it on those merits.

But it also performs all the Ableton Live-style workfloreplacesws you know. So there’s an APC/Push style interface, clip launching and editing, grids for playing drums and instruments, and sampling capability. There’s also a huge selection of synths and effects (courtesy AIR Music Technology), so while it can’t run third-party VST plug-ins, you should feel comfortable using it on its own. And it integrates with your computer when you’re in your studio – in both directions, though more on that in a bit.

And it’s US$1499 – so it’s reasonable affordable, at least in that it’s possibly cheaper than upgrading your laptop, or buying a new controller and a full DAW license. 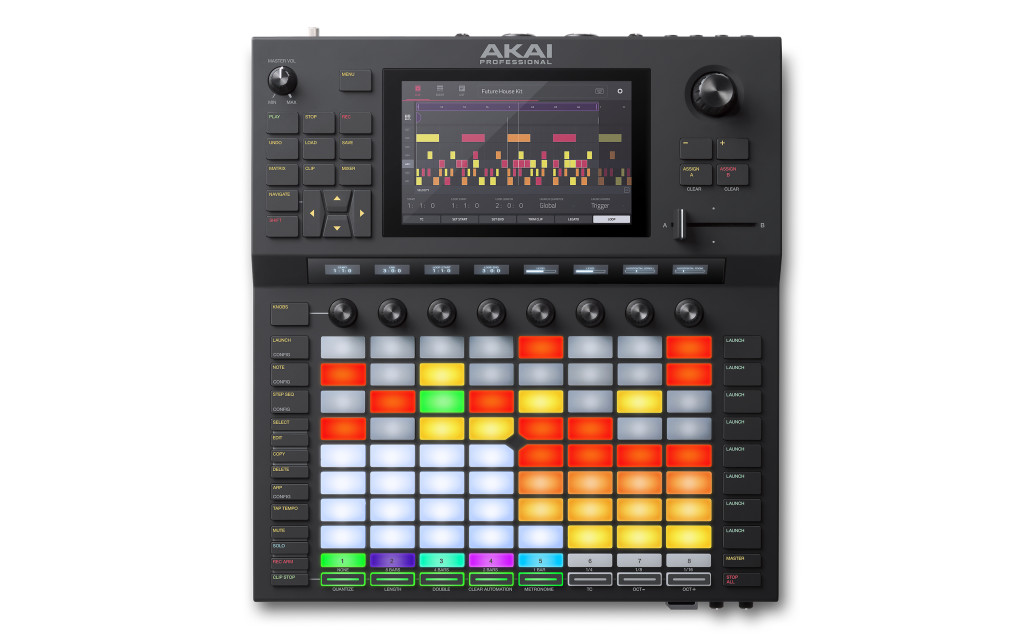 Clarification: about those eight tracks. You can have eight stereo tracks of audio, but up to 128 tracks total.

And there’s a powerful and clever scheme here that lets the Force adapt to different combinations of onboard synths and effects. Akai tells us the synths use a “weighted voice management” scheme so you can maximize simultaneous voices. Effects are unlimited, until you run out of CPU power. Since this is integrated hardware and software, though, you don’t fail catastrophically when you run out of juice, as you do on a conventional computer. (Ahem.) 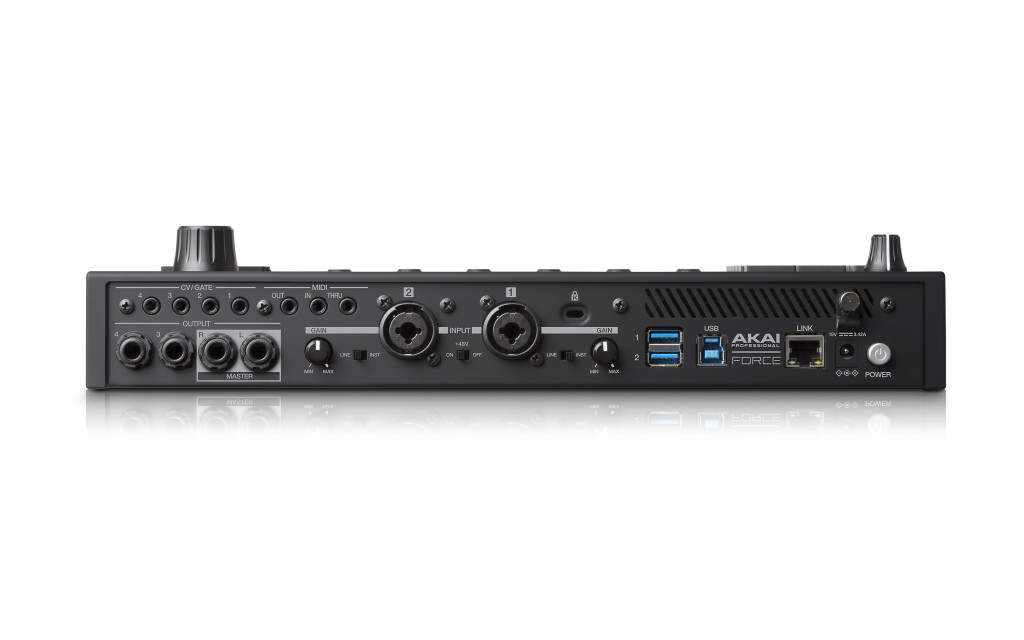 All that I/O – USB connectivity, USB host (for other USB gear), CV (for analog gear), MIDI (via standard minijacks), plus audio input / mic and separate out and cue outs.

US$1499 (confirming European pricing), shipping on 5 February to the USA and later in the month to other markets.

I’ve had a hands-on with AKAI Professional’s product managers. The software was still pre-release – this was literally built last night – but it was very close to final form, and we should have a detailed review once we get hardware next month.

The specs don’t really tell the whole story, so let’s go through what this thing is about. 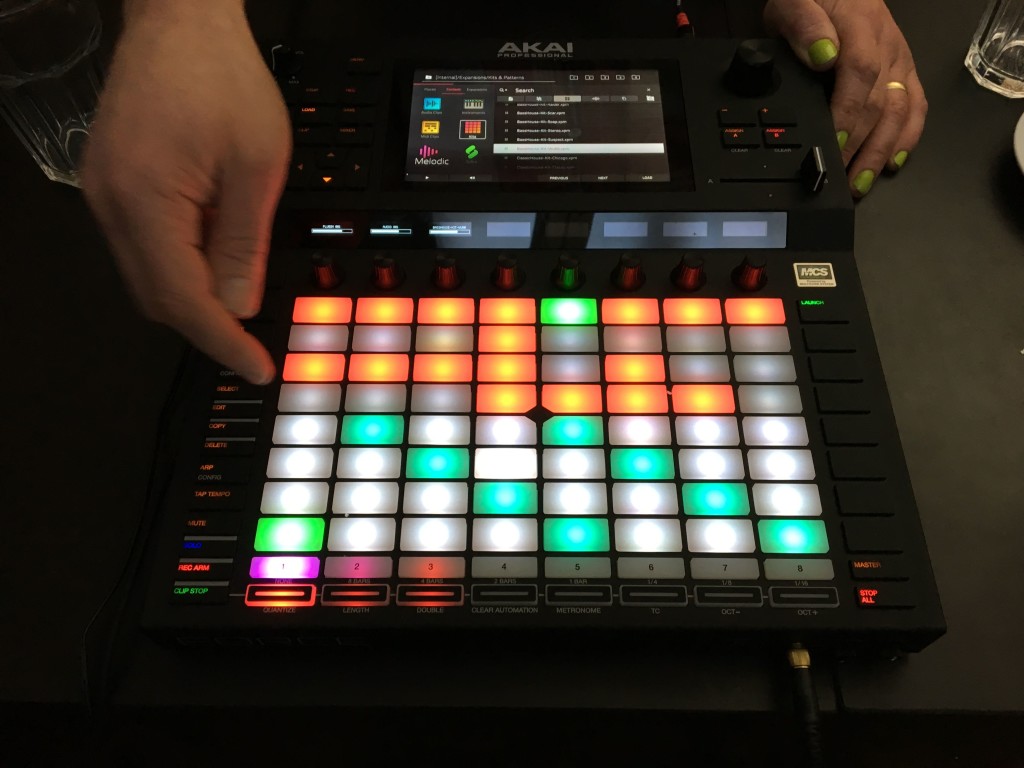 In person, the arrangement turns out to be logical and tidy.

The images leaked via an FCC filing of a prototype did make this thing look a bit homely. In person with the final hardware, it seems totally logical.

On the bottom of the unit is a grid with shortcut triggers, looking very much like a Push 2. On the top is a touch display and more shortcut keys that resemble the MPC Live. You also get a row of endless encoders, which now Akai call just “knobs.”

The “hump” that contains the touch display enables a ton of I/O crammed onto the back – even with minijacks for MIDI, the space is needed. And it means the displays for the knobs are tilted at an angle, so they’re easier to read as you play, from either sitting or standing position.

There are also some touches that tell you this is Akai hardware. Everything is labeled. Triggers most often do just one thing, rather than changing modes as on Ableton Push. And there are features like obvious, dedicated navigation, and a crossfader.

In short, you can tell this is from the folks who built the APC40. Whereas sometimes functions on Ableton Push can be maddeningly opaque, the Akai hardware makes things obvious. I’ll talk more about that in the review, of course, but it’s obvious even when looking at the unit what everything does and how to navigate.

Oh and – while this unit is big, it still looks like it’d fit snugly onto a table at a venue or DJ booth. Plus you don’t need a computer. And yeah, the lads from Akai brought it to Berlin on Ryanair. You can absolutely fit it in a backpack. 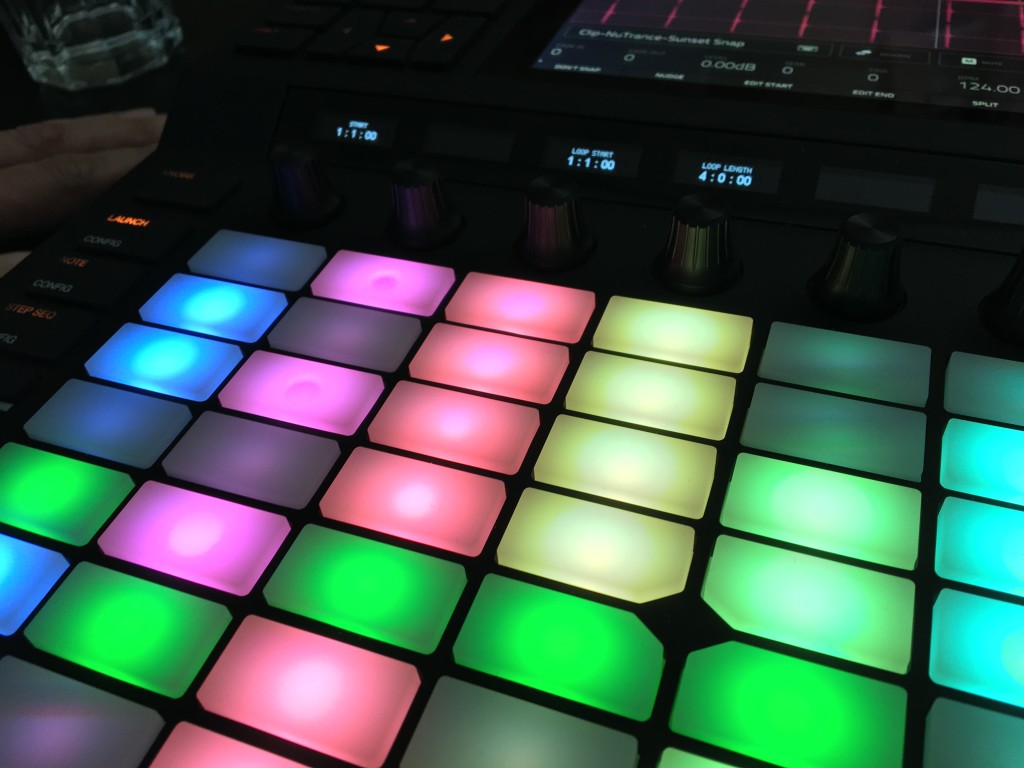 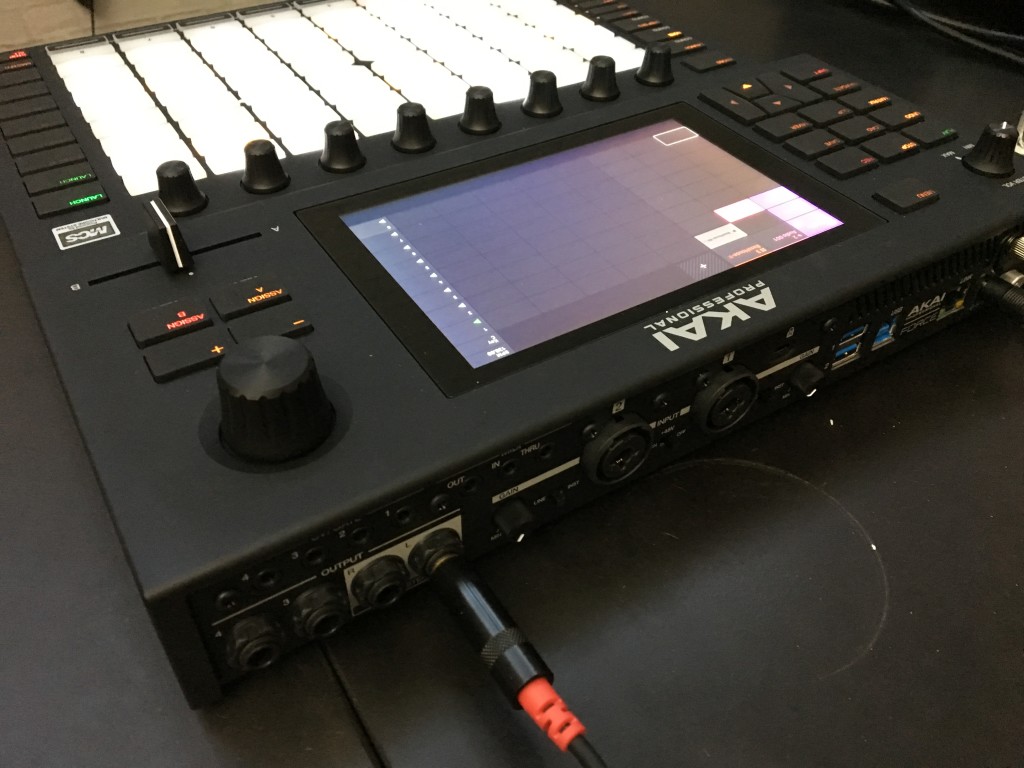 What impresses me about this effort from Akai is that it takes into account a whole range of use cases. Rather than describe what it does, maybe I should jump straight into what I think it means for those use cases, based on what I’ve seen.

It runs live sets. Well, here this is clearly a winner. You get clip launching just like you do with Ableton Live, without a laptop. And so even if you still stick to Live for production (or Maschine, or Reason, or FL Studio, or whatever DAW), you can easily load up stems and clips on this and free yourself from the laptop later.

You get consistent color coding and near-constant feedback on the grid and heads-up display / touch display about where you are, what’s muted, what’s record-enabled, and what’s playing. My impression is that it’s far clearer than on other devices, thanks to the software being built around the hardware. (Maschine got further than some of its rivals, but it lacks this many controls, lights, and display.)

That feedback seemed like it’s also not overwhelming, either, because it’s spread out over this larger footprint. There’s also a handy overview of your whole clip layout on the touch display, so you can page through more clip slots easily. 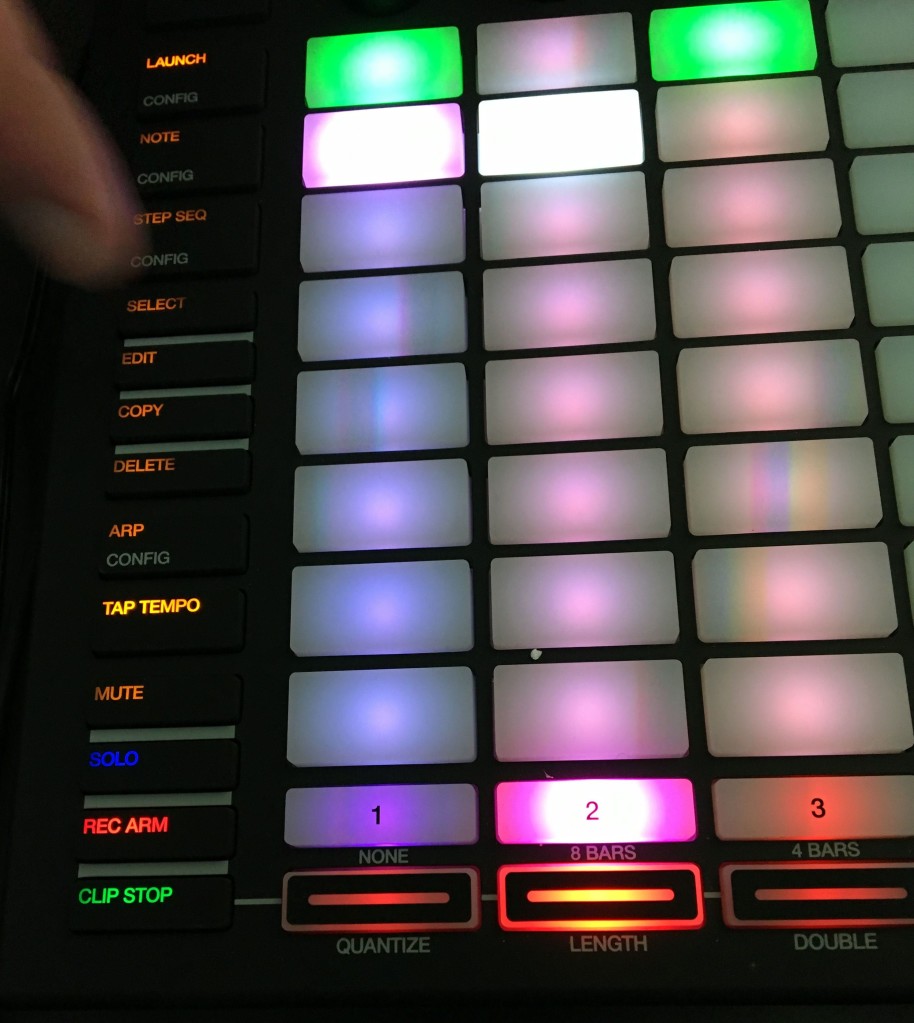 Logical, dedicated triggers and loads of feedback so you don’t get lost. 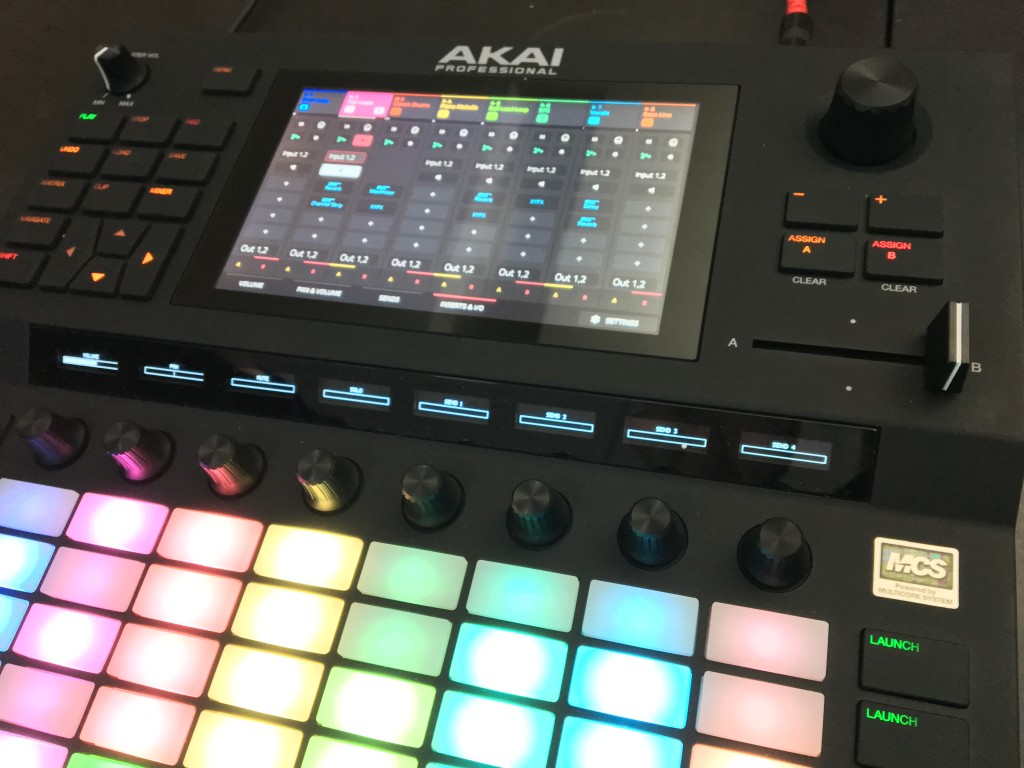 It’s a playable instrument – finger-drummer friendly. Of course, now that you can do all that stuff with clips, as with Push, you can also play instruments. There are onboard synths from AIR – Electric, Bassline, TubeSynth, and the new multifunctional FM + additive + wavetable hybid Hype. And there are a huge number of effects from lo-fi stuff to reverbs to delays, meaning you can get away without packing effects pedals. It’s literally the full range of AIR stuff – so like having a full Pro Tools plug-in folder on dedicated hardware.

That may or may not be enough for everyone, but you can also use MIDI and CV and USB to control external gear (or a computer).

The grid setup features are also easy to get into and powerful. There are a range of pitch-to-grid mappings, from guitar fret-style arrangements to a Tonnetz layout (5th on one axis, 3rd on another) to piano and chromatic layouts. There are of course scale and chord options – though no microtuning onboard, yet. (Wait until Aphex Twin gets his, I think.)

And there are drum layouts, too, or step sequencers if you want them.

Two major, major deviations from Push, though. You know how easy it is to accidentally change parts on Push when you’re trying to navigate clips and wind up playing the wrong instrument? Or how easy it is to get lost when recording clips? Or how suddenly a step sequencer turns up when you just want to finger drum a pad? Or…

Yeah, okay well – you have none of those problems here. Force makes it easy to select parts, easy to select tracks, easy to mute tracks, and lets you choose the layout you want when you want it without all that confusion.

Again, more on this in the review, but I’m thoroughly relieved that Akai seems to understand the need for dedicated triggers and less cognitive overhead when you play live. 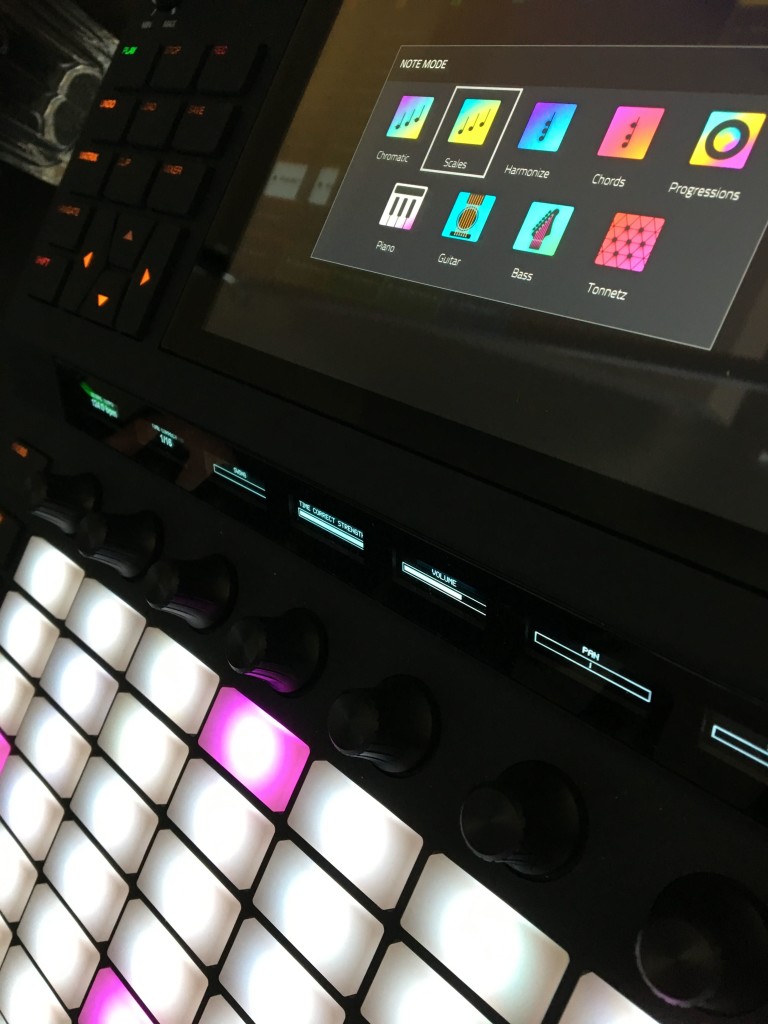 It can replace a computer for production, if you want. There’s deep clip editing and sampling and arrangement and mixing functionality here. Clips even borrow one of the best features from Bitwig Studio – you can edit and move and duplicate audio inside a clip, which you can’t do in Live without bringing that audio out into the Arrangement. So you could use this to start and even finish tracks.

The Force doesn’t have the same horsepower as a laptop, of course. So you’re limited to eight stereo tracks. Then again, back in the days of tape that bouncing process was also creatively useful – and the sampling capabilities here make it easy to resample work. 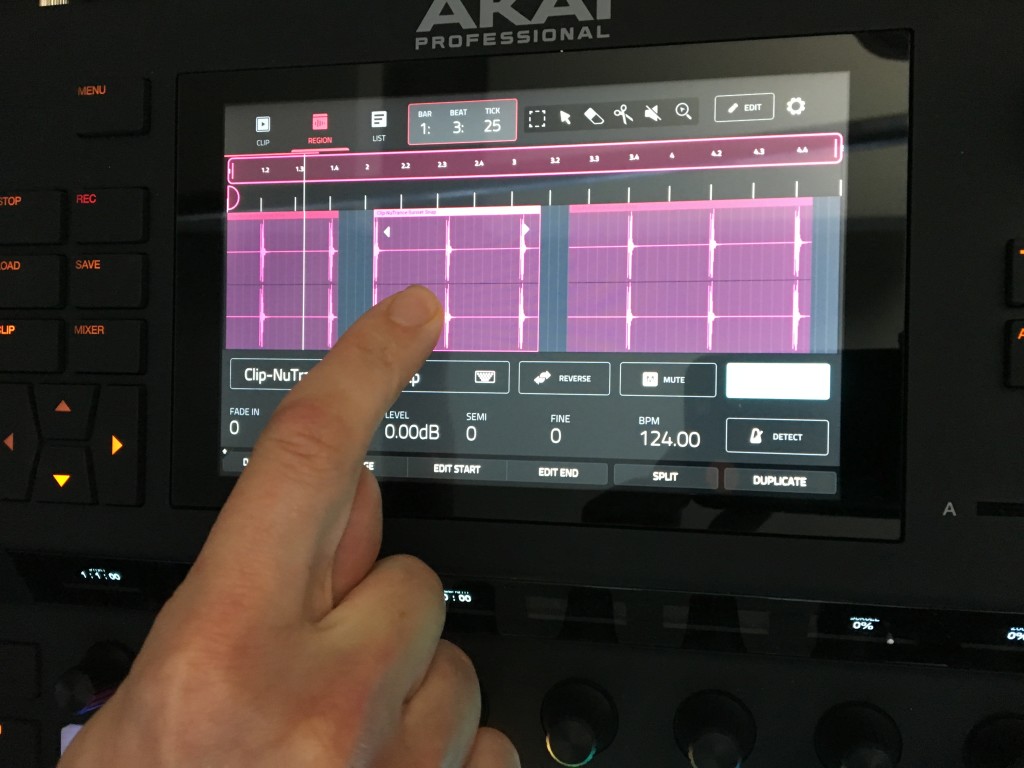 Powerful clip editing combines with sampling – and you can use both the touchscreen and dedicated hardware controls.

Or you can use it as a companion to a computer. You can also use Force as a sketchpad – much like some iPad tools now, but of course with physical controls. There’s even an export to ALS feature coming, so you could start tracks on Force and finish them in Ableton Live – with your full range of mixing an mastering tools and plug-ins. (I believe that doesn’t ship at launch, but is due soon.)

Also coming in the first part of this year, Akai are working on a controller mode so you can use Force as an Ableton Live controller when you are at your computer.

There’s wired connectivity. You can set up MIDI tracks, you can set up CV tracks. There’s also USB host mode. Like the grid, but wish you had some MPC-style velocity-sensitive pads? Or want some faders? Plug in inexpensive controllers via USB, just as you would on your computer. You only get two audio ins, but that’s of course still enough to do sampling – and you get the sorts of sampling and live time stretching capabilities you’d expect of the company that makes the MPC. 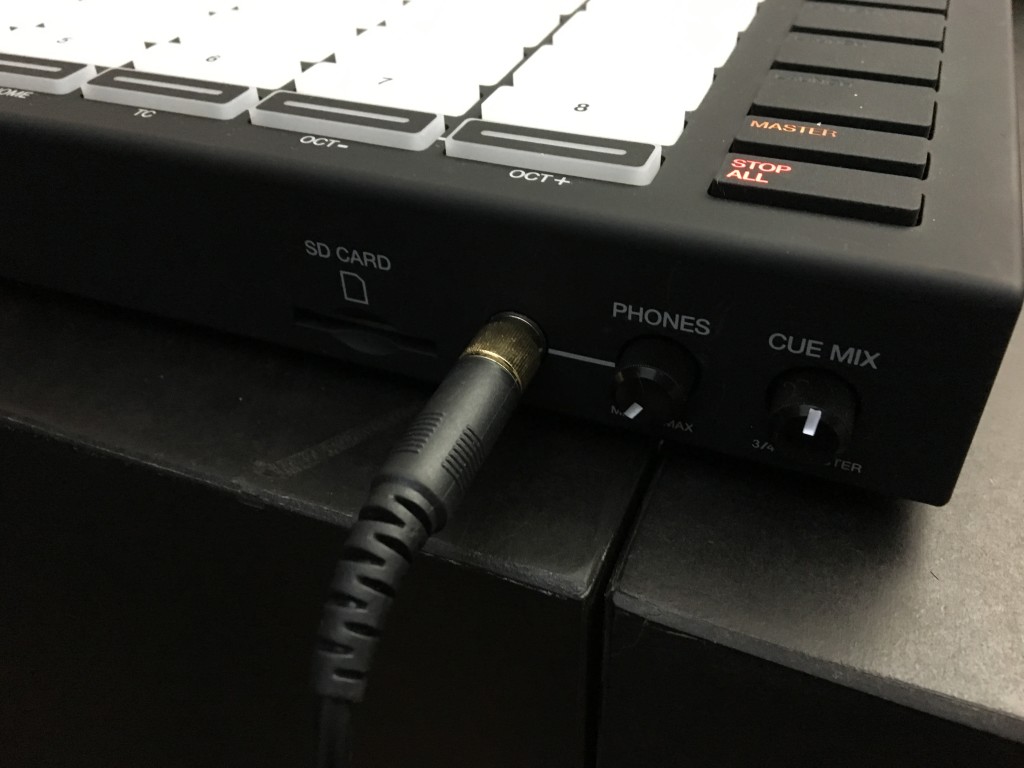 On the front – SD card loading (there’s also USB support and internal drive upgradeability), plus a dedicated cue output for your headphones. 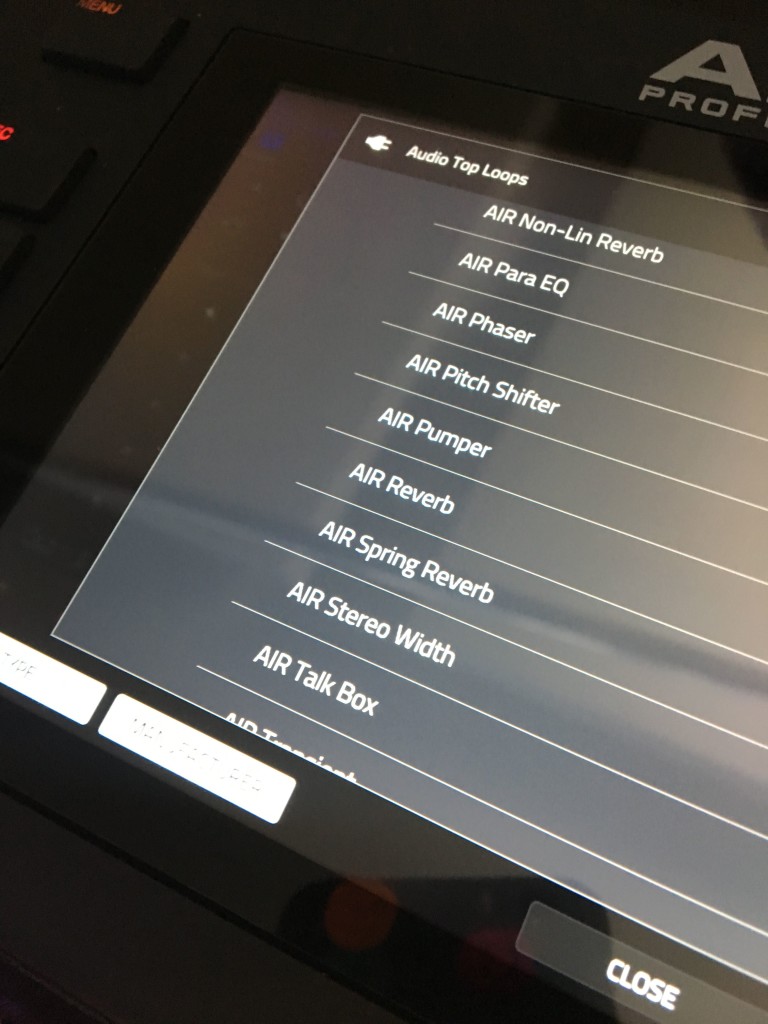 The full range of AIR effects is onboard. 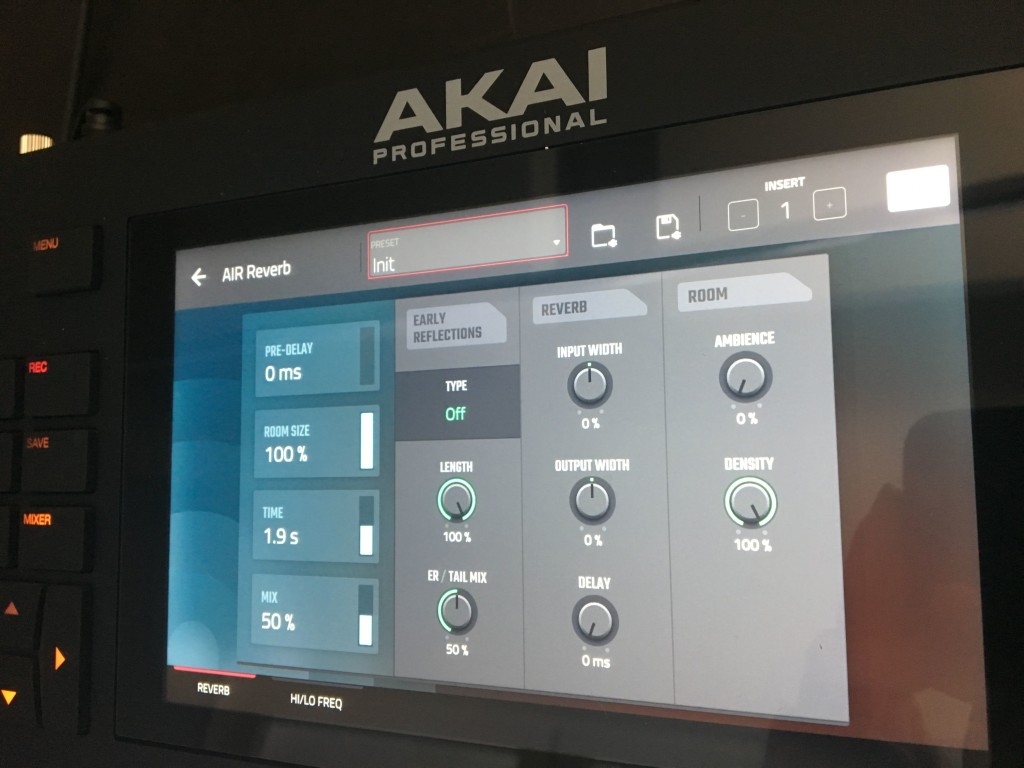 Powerful audio effects should help you grow with this one.

And there’s wireless connectivity, too. You can sync sample content via Splice.com – which includes your own samples, by the way. (Wow, do I wish Roland did this with Roland Cloud and the TR-8S – yeah, being able to have all my own kits and sample sets and sync them with a WiFi connection is huge to me, even just for the sounds I created myself.)

There’s Ableton Link support, so you can wirelessly sync up to your computer, iPad, and other tools – clocking the Force without wires.

There’s even wireless support for control and sound, meaning that Force is going to be useful even before you plug in cables. 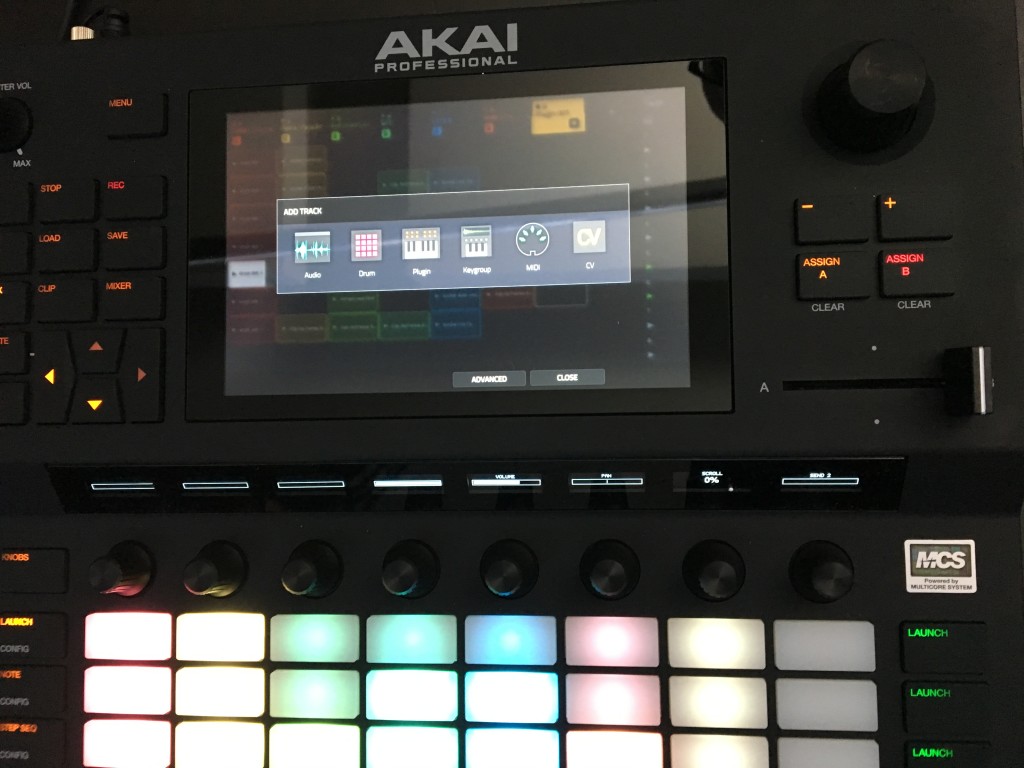 Bottom line. There are a lot of users for whom this will fit some major use cases – where standalone hardware really wasn’t available for the job. So it replaces Ableton Live onstage, if you want. It works with Ableton Live. It replaces your computer. It works with your computer. It’s a monster standalone instrument. It’s a monster sequencer for your other instruments. It does a bunch of stuff. It doesn’t try to do too much (manageable controls, clear menus).

Basically, this already looks like the post-PC device a lot of us were waiting for. Can’t wait to get one for review.

The Stylophone goes totally luxe with the GEN R-8

gridsHardware
Polyend Tracker 1.5 lets you save custom instruments – and opens up sharing with others
previews
Dorico 4 is finally engraving-level notation with MIDI editing powers, in a single tool
Hardware
An album released on Nintendo 64 cartridge – the next nerdy Remute ROM release
Hardware
Softpop SP2 is next-level analog synthesis and processing from Bastl and Casper Electronics