How to make a multitrack recording in VCV Rack modular, free

In the original modular synth era, your only way to capture ideas was to record to tape. But that same approach can be liberating even in the digital age – and it’s a perfect match for the open VCV Rack software modular platform.

Competing modular environments like Reaktor, Softube Modular, and Cherry Audio Voltage Modular all run well as plug-ins. That functionality is coming soon to a VCV Rack update, too – see my recent write-up on that. In the meanwhile, VCV Rack is already capable of routing audio into a DAW or multitrack recorder – via the existing (though soon-to-be-deprecated) VST Bridge, or via inter-app routing schemes on each OS, including JACK.

Those are all good solutions, so why would you bother with a module inside the rack?

Well, for one, there’s workflow. There’s something nice about being able to just keep this record module handy and grab a weird sound or nice groove at will, without having to shift to another tool.

Two, the big ongoing disadvantage of software modular is that it’s still pretty CPU intensive – sometimes unpredictably so. Running Rack standalone means you don’t have to worry about overhead from the host, or its audio driver settings, or anything like that.

What you’ll need to make this work is the free NYSTHI modules for VCV Rack, available via Rack’s plug-in manager. They’re free, though – get ready, there’s a hell of a lot of them.

Big thanks to chaircrusher for this tip and some other ones that informed this article – do go check his music.

Type “recorder” into the search box for modules, and you’ll see different options options from NYSTHI – current at least as of this writing.

The multitrack is the one I use the most. It allows you to create stems you can then mix in another host, or turn into samples (or, say, load onto a drum machine or the like), making this a great sound design tool and sound starter.

This is creatively liberating for the same reason it’s actually fun to have a multitrack tape recorder in the same studio as a modular, speaking of vintage gear. You can muck about with knobs, find something magical, and record it – and then not worry about going on to do something else later. 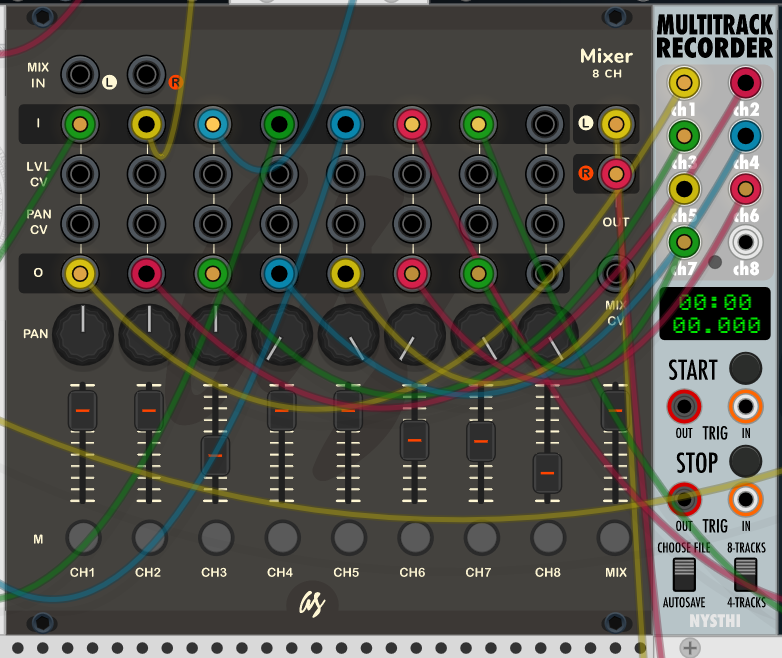 The AS mixer, routed into NYSTHI’s multitrack recorder.

Set up your mix. The free included Fundamental modules in Rack will cover the basics, but I would also go download Alfredo Santamaria’s excellent selection , the AS modules, also in the Plugin Manager, and also free. Alfredo has created friendly, easy-to-use 2-, 4-, and 8-channel mixers that pair perfectly with the NYSTHI recorders.

Add the mixer, route your various parts, set level (maybe with some temporary panning), and route the output of the mixer to the Audio device for monitoring. Then use the ‘O’ row to get a post-fader output with the level.

(Alternatively, if you need extra features like sends, there’s the mscHack mixer, though it’s more complex and less attractive.) 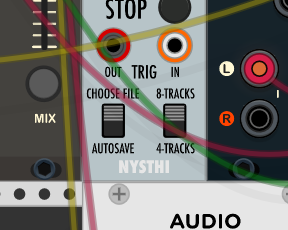 Prep that signal. You might also consider a DC Offset and Compressor between your raw sources and the recording. (Thanks to Jim Aikin for that tip.)

Configure the recorder. Right-click on the recorder for an option to set 24-bit audio if you want more headroom, or to pre-select a destination. Set 4- or 8-track mode with the switch. Set CHOOSE FILE if you want to manually select where to record.

There are trigger ins and outs, too, so apart from just pressing the START and STOP buttons, you can either trigger a sequencer or clock directly from the recorder, or visa versa.

Record away! And go to town… when you’re done, you’ll get a stereo WAV file, or a 4- or 8-track WAV file. Yes, that’s one file with all the tracks. So about that…

Splitting up the multitrack file

This module produces a single, multichannel WAV file. Some software will know what to do with that. Reaper, for instance, has excellent multichannel support throughout, so you can just drag and drop into it. Adobe’s Audition CS also opens these files, but it can’t quickly export all the stems.

Software like Ableton Live, meanwhile, will just throw up an error if you try to open the file. (Bad Ableton! No!)

It’s useful to have individual stems anyway. ffmpeg is an insanely powerful cross-platform tool capable of doing all kinds of things with media. It’s completely free and open source, it runs on every platform, and it’s fast and deep. (It converts! It streams! It records!)

Installing is easier than it used to be, thanks to a cleaned-up site and pre-built binaries for Mac and Windows (plus of course the usual easy Linux installs):

Unfortunately, it’s so deep and powerful, it can also be confusing to figure out how to do something. Case in point – this audio channel manipulation wiki page.

In this case, you can use the map channel “filter” to make this happen. So for eight channels, I do this:

But because this is a command line tool, you could create some powerful automated workflows for your modular outputs now that you know this technique.

Sound Devices, the folks who make excellent multichannel recorders, also have a free Mac and Windows tool called Wave Agent which handles this task if you want a GUI instead of the command line.

That’s worth keeping around, too, since it can also mix and monitor your output. (No Linux version, though.)

Bonus tutorial here – the other thing apart from recording you’ll obviously want with VCV Rack is some hands-on control. Here’s a nice tutorial this week on working with BeatStep Pro from Arturia (also a favorite in the hardware modular world):

I really like this way of working, in that it lets you focus on the modular environment instead of juggling tools. I actually hope we’ll see a Fundamental module for the task in the future. Rack’s modular ecosystem changes fast, so if you find other useful recorders, let us know.

Step one: How to start using VCV Rack, the free modular software

how-tomodulartutorials
Make your own MIDI-to-CV adapter in a skull, with a 3D printer and CircuitPython
modular
ALM ASQ-1 is a cute modular step sequencer with SH-101-style, drum trigger modes
how-toSoftware
Looom for iOS makes animating like playing a musical instrument, now with major update
freefree as in freedomSoftware
mlre is an expanded version of the classic monome mlr, focused on performance