Inside the esoteric moon music of Doc Sleep, underground connector

Leftfield grooves, cycles inspired by the cinematic qualities of lunar and natural world – welcome to Doc Sleep’s “Your Ruling Planet.” I talked to the Room 4 Resistance resident and Jacktone Records co-owner about her work.

Doc Sleep is a San Francisco-to-Berlin transplant, and apart from her prolific production career and packed DJ schedule, she’s someone who makes connections and creates space for others in an underground scene so often overlooked for solitary solo artists. So that has meant broadcasting on the legendary Intergalactic FM, collaborating and remixing across labels from Twirl to Discwoman, and more recently being a resident and curator of Room 4 Resistance, the activist, queer collective.

And her music productions mirror the thoughtful, eclectic materials of her label Jacktone. “Your Ruling Planet” is comfortably odd, relaxing into organic rhythms that dance hypnotically through the stereo field, gentle ambiences and field loops feathering into one another. She tells us a bit about how this came about and where she’s headed.

Lunar eclipses and whatnot – can you share a bit with us the cosmic narrative for you in this music? What brought it on; how does that translate to the music?

I have a lot of memories from childhood connected to seasons and nature. I’m from a rural area, so it’s all tied up with a bit of colloquial wisdom, farmers almanac kind of context. Something like the harvest moon or spring equinox – these were all part of the vernacular, but in a practical, matter-of-fact way. These memories were on my mind when I was working on the music in January because of the eclipses (partial solar, total lunar). As I was recalling memories and stories, the natural and ‘otherworldly’ elements were always so strong in beautiful cinematic ways – the look of the sky and moon, colors at dusk, constellations, northern lights glimpsed through the trees, and so on. I started to record and structure the release as a narration and soundtrack for these fragments and how to bring them into the present. Sonja (the amazing artist who designed the cover), sent along artwork and referred to it as ‘celestial’ – and it was solidified. 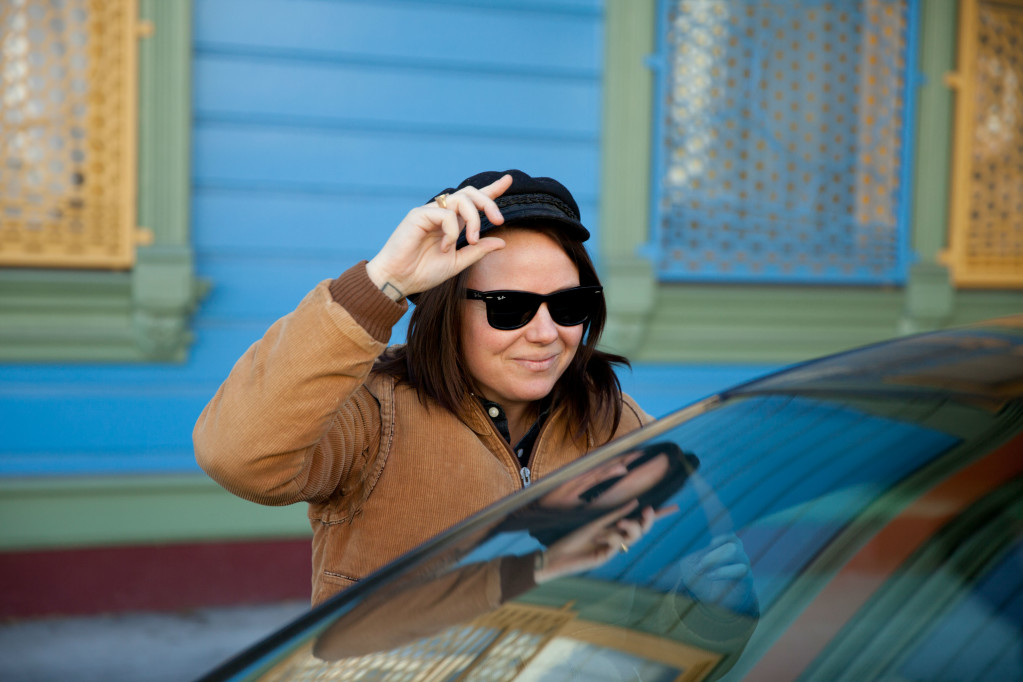 What’s your toolset like for this album? There’s a really organic sound to these elements; how are you working?

I was feeling stuck last year with the DAW tools I had, and a pal made some specific suggestions to spice it up in Ableton – Reaktor, Max for Live, etc. You know, things most people have been using for ages, ha! Since moving to Berlin, I’ve been producing ‘in the box’, so between using a Push, experimenting with Reaktor and just generally getting more comfortable in Ableton – I’m finally able to be more spontaneous. Lots of accidents are happening all that good stuff. Being able to record and manipulate audio out of Reaktor added an imperfect, unwieldy element I was missing from my setup and I use it heavily these days. I also mangle samples and sample packs, use field recordings, analog synth plug-ins, piano and guitar plug-ins – lots of warmer-sounding instruments. I add plenty of effects (reverb, space echo, tape distortion) to give the sounds a bit of depth and character. I am still learning and experimenting with every session, so we’ll see where I end up with the next EPs later this year.

Got any favorite Reaktor or Max tools?

For Reaktor, I like Wave Weaver, the Metaphysical Function Sound Generator, the Photone, FM4, Junatik, Titan and Carbon synths. 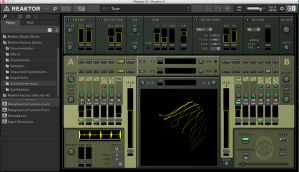 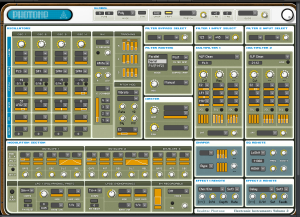 Next thing to tackle for me – Reaktor Blocks

I’m particularly interested in the element of time – there’s a sense of cycle, but without being too fixed to a grid. How many layers are we hearing at once / how much is real time versus worked out after the fact? There’s a particularly hypnotic sense for me on the last cut (“Emerado Falls”).

I love that you mentioned a sense of cycle. This all fits nicely with the themes and I’m glad this came out in the music.

In general, I like to layer melodic elements and play with the phasing/fading in and out with the different layers… actually, maybe cramming is a better word. I will manipulate a sample or record audio out of Reaktor over percussion and then record several versions of what I want, but all slightly different with effects and then layer it and work on the arrangement from there.

In these tracks, for some of the more ‘ethereal’ parts, I was layering vocals and having them interplay with synths that mirrored the melody line. There are probably four or five mid- to higher-register melodic elements at one time in “Emerado Falls.” I wanted them to be indistinguishable at times, or sometimes the different sounds coming in and out of focus – my friend at Grippers’ Tips referred to it as ‘smudged ambience’, which I really like. As far as the pianos that come in and sort of collide at the end, this was difficult to get them timed in a way that didn’t sound ‘off’ or distracting. I’m not seeking perfection with the music, but I also don’t want it be so off-grid that it pulls the listener out of the moment.

I hear various field recordings. Does that figure into the story of this music for you?

I was very interested in bringing these elements into the music, yes. In the mid 2000s I made music with a friend who had gone to school for sound art, so this is when I started to learn what was possible mixing field recordings into music. Before that, I didn’t really understand how producers were doing it – magic, I guess. For this release, I was very particular about the sounds I used as I was trying to recreate and reconstruct situations / memories that represent something meaningful for me personally. For the listener, I wanted to share these personal experiences, draw them in and see if it would also resonate.

That said, maybe saying “ambient” is really the wrong term – there is some real groove here, too, on “Nim” or even “Your Ruling Planet.” Usually when we start talking DJs and production, we slip into the realm of tools and whatnot – are you feeding your life into a DJ into this, even when it is less obvious dancefloor material?

My first two releases, I wanted to make dancefloor material and hoped some pals would play it out in sets. This time around, since it was at home on Jacktone and I hadn’t released in awhile, I was more focused on realizing and executing ideas. There are dance tempos present, but I didn’t write with the dancefloor in mind, which feels like real progress for me. I’m glad a groove comes through, though – I would be sad if it didn’t!

You’re now in my impression really active DJing. What has the move to Berlin, and to Room 4 Resistance meant for that side of your career – and how do you fit in time for the label and production?

Being part of R4R, I’m surrounded by fantastic, experimental, bold artists that I’m lucky to play with and learn from. Being part of the collective has pushed me to try new things in sets and I’m a better and more confident DJ because of it. Because we now have the experimental/ambient room at Trauma Bar, the events will push even further out of the box of what a club night can look like in 2019. It’s an exciting time and I’m fortunate to be part of it.

As far as time management and prioritizing projects, it’s definitely difficult. I have about 3 hours before work (if I don’t hit snooze) and 3 hours after work to make headway on the various things I’m involved with and working on, so I have to be focused, disciplined and…very boring these days.

For those new to your label, any tips as far as where to begin?

If you poke around the Jacktone Bandcamp store, you’ll find everything from kosmische and dark ambient to pummeling acid and dub techno, psychedelic house to rhythmic noise, concept albums, soundtracks, IDM, lo-fi, breaks, electro… and so on. We’ve collaborated with such a beautiful variety of folks producing in different genres the past 5 years, it’s difficult to single out any one release. I will say, our next release, from a prolific artist named Le Scrambled Debutante from Tennessee, is offering what is probably our most experimental release thus far. I think he best described it: sonic Dada. After that, we’re back in the Bay for another psychedelic house release, and then our first vinyl collaboration of the year with Beacon Sound in Portland (artist TBA). 🙂

Oh, lastly, I love this artwork – can you tell us about Sonja and how the visual came about?

I’m so glad you like it! Sonja is a fabulously-talented designer, DJ, and label owner from Portugal. I’ve loved her aesthetic for so long and the music she puts out on Labareda is bold and imaginative and I thought she would be a great person to collaborate with for an image. Because it’s a digital-only release, we wanted it to be eye-catching and I think it works beautifully and captures the narrative perfectly. We liked it so much we also made it into a t-shirt.

Thanks! Yes, we’ll be watching for more from you and your label…

The Prodigy’s Keith Flint is gone, leaves punk-rock-rave legacy behind