Lalalab comes with a warning and looks like ‘iced donuts’ 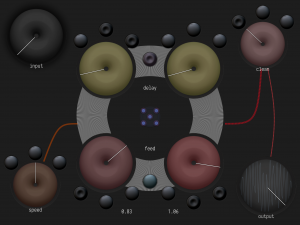 Any App that starts off its app store description with ‘Attention and warning’ is bound to get my attention, and Lalalab is just such an app. Just to be clear, here’s the developer’s warning:

You don’t want this app as your first musical effect, if you just want some new free app to love 10 minutes you need to skip this one. Program uses audio signal and sends it back to create echo effects and if you setup too much it can lead to loud volume bursts. At first you must understand what is Inter App Audio and Audiobus and use them with other apps.

This isn’t Savelii Kaliupanov’s first unusual app. In fact you could justifiably say that his apps have their own idiosyncrasies. Lalalab is itself based on part of Savelii’s Deregulator app. His last app before this one was zhsh, which he describes as “Noise-centered and barely musical audio-effect application”.

But back to Lalalab. Savelii describes his latest creation as being able to create long, rhythmically undetermined echoes with a cautious and discreet implementation. Lalalab is designed in “iced donuts” style like his other apps, and is part of Deregulator’s Echo engine with parameters for “delay”, “feedback” and “speed” of changing random values.

Lalalab has a limiter to suppress loud noise bursts, but as previously mentioned, you probably need to exercise some caution when trying this app.

Lalalab is free on the app store now: