Aleph Looper and Infinite Looper get twitter sequencing and more 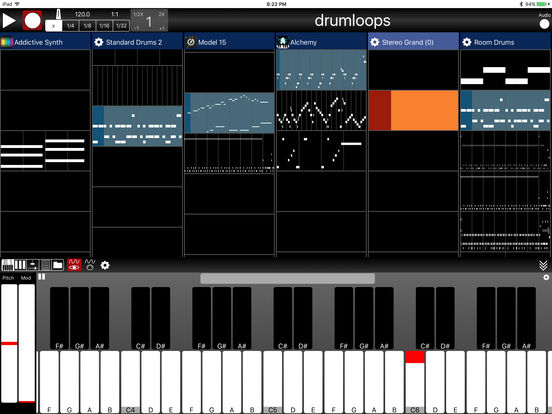 Secret Base Design have a couple of very similar apps in Aleph Looper and Infinite Looper, and the latest versions (2.3) brings a couple of really interesting features. They both sound interesting, but I’m more far more curious about the second, and perhaps the more esoteric feature that they’ve added. It’s a Twitter Step Sequencer. Yep! Sounds awesome to me.

In their own words …

And because many people have been asking for a Twitter Step Sequencer…. you can now tweet loops out, or import loops that others have tweeted. Seriously. And ok, no one asked for this, but now that you know you can do this, you will, right? Of course you will.

I’m looking forward to experimenting with that feature.

The first new feature in version 2.3 is a new loop-record mode which lets you play along, and capture each loop as a separate take. Just pick the take that you like best, and insert it into your project with a single tap. Because both Aleph Looper and Infinite Looper apps record MIDI, you don’t have to worry about running out of space; just let the loops run, focus on playing, and then go back and find the performance that captures the exactly what you’re looking for.

The loop import and export functions of both apps have also been enhanced. Now you can import tracks easily from MIDI files, export a loop as a MIDI file, or export an entire project as multi-track MIDI. You can also import loops from other Infinite Looper projects very quickly.

All in all a nice update for both of these apps.

Aleph Looper on the app store:

Infinite Looper on the app store:

If you’re in London on Friday, come to this