Musicians have thousands of years of history when it comes to interfaces and instruments, but visuals are relatively new. Little wonder, then, that visualists are eager to try new interfaces to help make visuals akin to performance instruments. Or, in less lofty terms, let’s get Wii remote wagging in the club tonight.

Over on createdigitalmusic.com, we’re celebrating Game Day — basically, I’m squeezing as many game-related posts into 24 hours, because a whole bunch of tips came in at once. A couple of Wii-related controller solutions jumped out.

MoteDaemon = Flash (and Flex, and AIR) + Wii, on Mac. On Windows, look to WiiFlash.org. (I imagine it wouldn’t be hard to modify your code to use one or the other on each respective platform if you want to develop cross-platformly.

Getting hardware control in Adobe Flash requires some work: basically, you need a client-server model. The good news is, there are already two Wii-specific solutions out there.

I’d loved to see this coupled with something like Onyx for an all-Wii, all-Flash performance app. With Flex and AIR (Adobe Integrated Runtime), this could be the basis for some really hard-core, full-blown apps … though you will be limited by Flash’s slower performance, at least in comparison to C/C++-based tools like Max or even Java.

Looks like Linux users are presently out of luck, unless I’m missing something (feel free to chime in if you know a cross-platform alternative).

For a more app-agnostic solution, you can hook up a Wii to send MIDI or, ideally, OpenSoundControl (OSC) to apps that support it (vvvv, Max, Pd, and hopefully VJ apps soon — I’ve heard a couple of developers working on it). 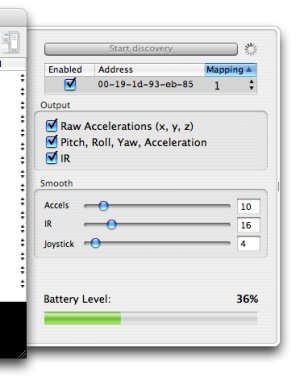 On Mac, you can send both OSC and MIDI with one app, perfectly-suited to taking data from the Wii controller:
OSCulator. OSCulator is a great tool for the Wii, but it also shows promise of what a hardware input hub could generally look like, with open-ended inputs controlling visuals and sound rather than pre-defined, MIDI-style keyboards and knob and faderboxes as have traditionally been used in music.

On PC, GlovePIE is an awesomely-powerful scripting tool for use with Wii and other game devices. I’ve talked about it endlessly before, but I’ll stay quiet — just go. Get it. Enjoy. In fact, with OSCulator on Mac and GlovePIE on Windows, it’s hard not to be insanely happy on either platform.

Another interesting out-of-the-box alternative, though, is the new Wiinstrument. It’s largely geared for playing back drum samples, but it’s not hard to take that metaphor and use those control changes and other MIDI messages as visual controls — especially if you think of your “drum kit” as sets of visual clips (video or other visuals). 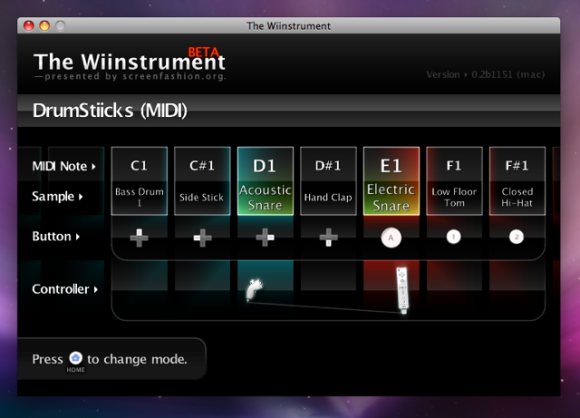 If you’re using a Wii on Windows, VJ Kung Fu has posted a full walkthrough:
Wii to MIDI Windows Walkthrough

And here’s an example on Vimeo of using the Wii with Processing: (I’m sure there are others)
Wii + Processing

Get Ur G33k 0n! Dorkbot Chicago this Wednesday; CDM in Perth, Brisbane

Digital Music, Universal, and Why Water is Thicker Than Coke

MacSoftwareWindows
AudioSlide plays advanced MPE ramps even without hardware – Max for Live
MacSoftwareWindows
data.train Max for Live instrument-effect mangles and transforms any sample or source
Software
PsyTexx is a forgotten tracker for Palm PDAs – with features like distortion
freeMacSoftwareWindows
Inflation, begone: SunVox is still donationware, and 2.1 makes it slicker and more powerful