Just how awesome is the GPU?

(That’s how we put it in highly technical jargon, anyway.)

You’d be forgiven for being skeptical of what photorealistic rendering’s future might be. After all, we’ve been hearing about how raytracing and better-looking, more realistic renders would someday revolutionize 3D visuals, and that, thanks to the GPU, you’d get this power in speeds approaching real-time. But the delivery has taken some time.

This isn’t a demo of some futuristic research tech at SIGGRAPH, though: it’s a product in beta right now you can use, today. (A beta license, amazingly, costs just EUR99 during the beta.) Friend of the site Marc has kept us posted on his new employer, and it’s amazing stuff. Refractive Software’s Octane Render does photorealistic rendering right on the GPU.

And it kicks the CPU’s sorry ass. Think 10-50x increases in performance over CPU-based rendering: not in theory, or in theoretical benchmarks, but in actual, real-world rendering. That makes the render fast enough that you can see it, so fast it can actually change your workflow. This isn’t saving time that you’d be looking at a progress bar, as with many CPU benchmarks. This means the ability to work with photorealistic imagery live on your desktop.

Do you have a CPU whose day you want to ruin? Show it this chart: 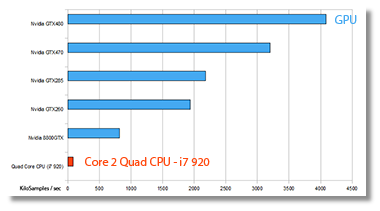 (Okay, okay, nothing against the CPU. CPUs are still ideal for doing tasks like audio processing, which tend to be less parallel and more dependent on timing. With the CPU blazing through audio and the GPU doing these kinds of visuals live, you have complete digital immersion on a basic, affordable computer.)

It’s about time, of course. I remember Apple making similar arguments about the coming dominance of the GPU years ago, but we haven’t actually seen it enter the world of visuals.

Here’s the other good news: this doesn’t cost a fortune. Even the demo above is using NVIDIA GTX 480 cards, which have a street price now under US$500. Sure, getting two of them is a little pricey, but this essentially amounts to using what once were considered “desktop” cards, not only-for-the-wealthy workstation models.

Oh yeah, and that whole thing about how the desktop computer is over? That could prove to be very, very wrong if computers open up these kinds of visuals.

That gallery has been populated just by the amazing work customers of the beta test are already doing.

This is very relevant to live visuals, too, because with fairly modest hardware rigs, we’re approaching stuff that could be modeled in real-time.

The future isn’t what it used to be – in a good way.

Musical Instrument Loss and Recovery After the Nashville Flood