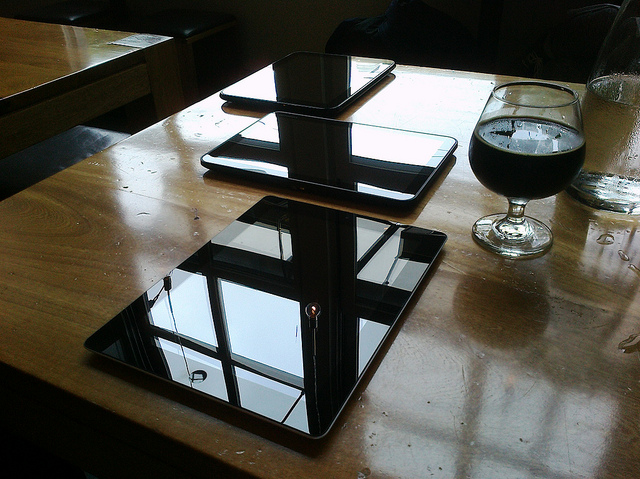 We’ve been watching tablets for some time now, looking for the perfect, mobile visualist performance tool. For the first time, those results begin to look genuinely promising. But here’s a surprise: it’s the Android-powered Motorola Xoom, not the Apple iPad 2, that shines in an early test. Well, sort of, anyway – it’s also evident that video output, while prominent in specs and ads, seems to be a bit of an afterthought in practice. (Also, “I want my HDMI mixer” may be the new “I want my flying car” for VJs.)

Richard Lawler, an experienced commercial iOS developer, has been spending a lot of time evaluating Android tablets. I prodded him to give the video output on the Android Honeycomb Moto XOOM a go, and he kindly shares his results.

Some of the highlights: you get native, 720p output in actual 16:9, and a dedicated HDMI port. Mirroring can work in any app. (Richard hasn’t tried this yet, but I’ve been reading documentation on allowing visual apps to separately address the tablet display and the output – something that could be very nice indeed for live performance.)

The iPad 2 has similar capabilities, but without the dedicated port and running a 1024×768 default output – not 16:9 – even when using HDMI. (I remain intrigued to see if developers can manually work around that and force the widescreen aspect ratio. Obviously, mirroring the native resolution absolutely makes sense for the default on each of these, but it does raise questions about what else is possible.)

The hardest part of all of this, bizarrely, is just finding the cable. The XOOM has a dedicated port, which gives it a subtle but meaningful edge over the iPad 2, even with Apple’s special dongle. But while micro HDMI is not proprietary to Motorola, good luck finding a cable at point of sale. After seeing an absurdly-expensive Radio Shack option, Richard wisely headed to Amazon and spent just a few bucks.

I got my micro HDMI cable, and it works fine with the Xoom. You just plug the Xoom via the micro HDMI cable into an HDTV and it mirrors the display. Audio is also sent out via HDMI.

The Xoom has a 16:10 format 1280×800 display. When connected to a 16:9 HDTV the Xoom is forced into landscape mode (if permitted in the software). The bottom 80 pixels are chopped off yielding 1280×720 – 720p. The bottom 80 pixels of the screen almost always holds the System Bar on Honeycomb. (The Honeycomb System Bar is where the permanent navigation buttons are located, notifications are posted and the notification menu is accessed.)

If the current app does not support landscape (e.g. Scene Player) then the screen remains in portrait mode but displayed sideways (90-degrees CCW) on the HDTV. In portrait orientation the Xoom’s left-most 80 pixels are chopped off the bottom of the HDTV display.

The HDMI mirroring supports digital audio out. I don’t know what the latency is for the digital audio, but audio seemed to be synced with video sources.

Apparently the Xoom HDMI output is limited to 720p as is the Xoom’s video camera recording.

There is currently no HDCP on the Xoom’s HDMI signal, but Motorola says it is coming. (Honeycomb supports a new DRM plugin architecture that should allow OEMs to provide DRM services to apps like Netflix and Amazon for HD movies.)

I am happy with the Xoom’s HDMI. It’s simple and works pretty much as you would expect. The digital audio output seems promising too.

I’m wondering about the practicality of using HDMI for audio output on other Android devices like the EVO, Droid X and others. I briefly experiment with my EVO with my new cable. With the micro HDMI cable plugged in it outputs any video AND audio via HDMI, but it doesn’t mirror the display. For example PdTest’s audio output worked fine out the HDMI.

A friend who got an iPad 2 was excited by its new HDMI capabilities too. It apparently also just mirrors everything out the HDMI. The special HDMI dongle Apple designed also provides a USB power input since the dongle hogs up the iPad’s dock. (The Xoom uses a separate dedicated power jack.)

I also got a USB gender changer, but I have had no luck with it. Xoom/Honeycomb sees neither the QWERTY keyboard nor mouse I have tried to attach.

As I mentioned before, the MicroSD card slot is not yet functional on the Xoom/Honeycomb. In fact the slot holds a dummy plastic card that says “Replace with MicroSD only after Android system update”.

This is only a casual hands-on test to get the discussion rolling, literally copied out of an email thread with Richard, so your mileage may vary, but it’s nice to hear these impressions as a start.

You can read Engadget’s disappointment with iPad 2’s HDMI output, but I’ll be curious to hear from developers on that front.

All in all, with either Apple or Android, it’s early days, but I’m liking what I’m seeing on both sides. Ironically, I think the bigger challenge on the XOOM may be working out a VGA output rig from the HDMI for dealing with projectors that still want VGA and 4:3.

Expect more detailed information to come, particularly if I manage to pick up a XOOM to test with Processing, OpenFrameworks, and native development alongside my (first-gen) iPad. But I did want to provoke the beginnings of that discussion now. The NVIDIA graphics in the XOOM – and the graphics chipset in the iPad 2, as well – are nothing to sneeze at. While laptops easily trump tablets for power and flexibility, there is some potential for the tablet in your digital visual arsenal, too. I look forward to seeing more.

A Tranquil, Twinkling Set of Synthesized Cycles, Made for arc’s Wheels