The craft of photorealistic gaming has risen to astounding heights, but look-alike art direction can overshadow its technical achievement. Not so with an extraordinary-looking indie title called Hawken. The mech combat first-person shooter, built in the Unreal Engine, is crafted in a way that speaks to the possibilities of digital technique to spin imaginary worlds, and to build integrated aesthetics.

As Technical Lead Jon Kreuzer told PC Gamer, the nine-person LA studio reused components to construct the world of the game: “Many parts of the levels are created by combining re-usable building blocks into unique structures, which can allow new levels to come together quickly.” The results saved time, but the patchwork quilt of textures and modules also helps create a convincing aesthetic order to the title, an eye-popping, recursive detailed quality.

The inspiration for the technique comes not from digital media, however, but from good, old-fashioned model making. Team leader Khang Le told Kotaku:

It’s a kitbash design sense that been around since the first Star Wars movie. Getting random parts of airplanes, ship models and just bashing them to create something strange and weird. These days you can do that in a 3D program and I just love that organic process.

Kitbash may sound like, erm, the first thing that happened when you tried to put together a model airplane. (There’s a reason I didn’t wind up in the model-making business. Peter bash! Peter smash! Peter … get plastic cement stuck to his fingers.) But it actually refers to the technique of reusing stock model kit components to produce a realistic model of something else, by combining kits of parts. You literally dump out parts from multiple kits and keep combining until you get what you want, emphasizing getting the look right over using components that literally represent a certain function. That is, you could very well use a drain pipe from a house to get a realistic-looking spaceship hydraulic if you wanted – or any number of variations. 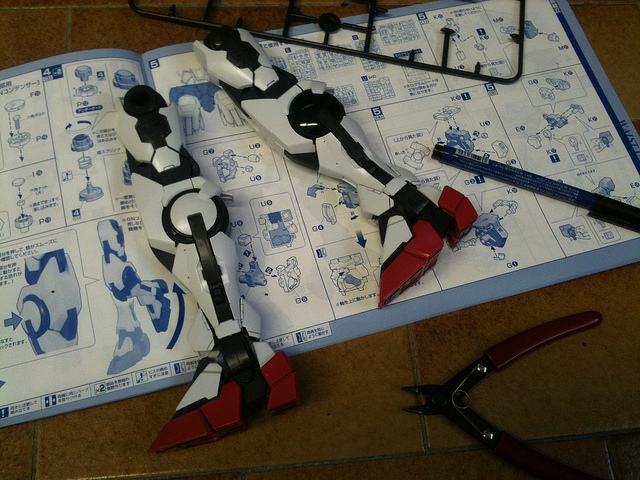 In digital modeling, this is a really suggestive technique that could be used for just about anything, from first person shooters to experimental generative graphics. The idea is, rather than create the specific thing you need, create variations based on a core language of reusable components. It happens to be entirely accidental that this story follows one on Brian Eno and generative visuals, but the two are closely related. Of course, it’s good to have some background in physical model building, because then you’ve had the sensation of messing around with little plastic bits, and the whole abstraction becomes more real.

The title is still in production, but a new gameplay video debuted this week – seen at top. If you follow the world of gaming, you probably already know that, but if you don’t – or if the brilliant stuff like this gets lost in the dreck of the industry – it’s worth seeing.

Bellow, the trailer that first turned heads in the gaming world.

Check out the game, and try to work out how you’ll sit on your hands until it’s out:
http://www.hawkengame.com

Japan
Watch this Kazakh pop video for the maximum weirdness of Casio’s singing robot keyboard
awesomenessJapan
Type in lyrics, and this keyboard sings them, as Casio returns to its Casiotone roots
modeling
IK’s model of the Neve 1081 console is free this month, plus free EQ and metering
technique
Get lost in magical 1983 footage of Brilliant Trees, delicate IBM Dictaphone looping