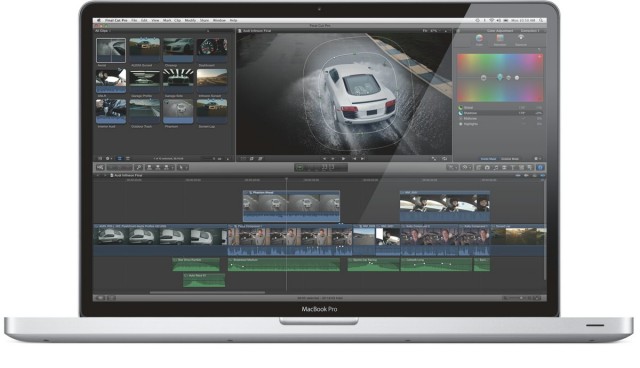 A mind-boggling number of words have been spilled around Apple’s Final Cut Pro X release. I won’t add to that editorializing here, but I will point to some information that I think can help you make sense of the new software, some of its promise, and some of the issues that are keeping editors from upgrading, at least for now.

Final Cut Pro X is effectively a new application, written from scratch. It does offer some significant improvements over its predecessor. There’s an open-ended, more flexible timeline, powerful automatic media handling features, and ground-up support for more modern technologies like Grand Central Dispatch, 64-bit computing, and OpenCL-based rendering. Carbon’s out; Cocoa’s in – and with it, so are the latest-and-greatest advanced APIs. In fact, the new Final Cut and Motion are a playground for the kinds of tech Apple visual geeks have eyed closely, with more modern QuickTime frameworks and GPU-native rendering an essential part of how this works. All of this can add up to the ability to work on complex projects without rendering. For that reason, without reviewing the product itself, I think it may be premature to assume Apple is trying to jettison the pro market – a market that is lucrative, influential, and essential to the Mac platform.

Any major change can jeopardize market share, particularly in a pro community. The criticisms from that community are now well-known, and can be divided into one of two categories: discomfort with the new editing interface, and frustration with missing features that are essential to at least some editors’ workflows. The discomfort with change may pass with time, if the software proves powerful and worth adaptation. As for missing features, though, some of these may simply need to be addressed in an update.

With so much to read, I highly recommend Gary Adcock’s review for Macworld. (Disclosure: I’m a Macworld contributor.) It seems to me to be a balanced review and an in-depth look at a variety of issues, and focuses on the tool itself rather than over-indulging in speculation about Apple’s motivations. (There’s a place for that in tech punditry, to be sure, but that means you can focus on the merits of the software itself without any additional baggage. It is, after all, a tool.)

I’m not prepared at this juncture to weigh in on what I personally think of the new Final Cut, but I do respect Gary’s opinion and perspective. He has a great blog, is heavily involved in the broadcast community, and is a real expert on how video tools translate to real-world workflows.

Gary nicely lines up some of the pros and — for the source of the controversy you may have read — cons. As with any new tool, considering those cons is wise before taking any leap.

Cons
Does not open previous Final Cut Pro projects
No third-party support for hardware monitoring or software add-ons
Tape media can only be captured via Fire wire.
Defaults to media capture from camera
No support for import or export of content to other editors or other finishing systems
No mention of 3D or high-end workflow or deliverables anywhere in the documentation
Limited XML and no EDL support restricts usability with other non-Apple software applications
Final Cut Studio 3, Final Cut Express and Final Cut Server all discontinued with this release

The best round-up I’ve read of answers to the criticisms from the source comes from David Pogue at The New York Times talking to Apple directly. In that article, product managers respond directly to the issues; the answer is, very often, that features are slated to be restored in a future version (though that may or may not comes as a comfort in the short term).

Complaints have even led to reports that Apple is offering refunds, though unofficially and on a case-by-case basis:
Apple offers refunds to upset Final Cut Pro X users, but “rage-quitting” exodus grows [Boing Boing]

Note the byline on that last story – it’s from Apple enthusiast and video editor herself, Xeni Jardin.

If you do decide to take the leap — or if you want a walkthrough of the tool before committing — MacProVideo have a free, 45-minute tutorial (registration required). Michael Wohl, one of Final Cut Pro’s original designers, is the trainer – no word yet on what he thinks personally of the changes, though it sounds as though he’s generally positive. They’re also planning a series of tutorials which will be available for-fee:

Also a great reference on the sound side of Final Cut Pro X (notably accompanied by the demise of Soundtrack Pro):
Final Cut Pro X for Audio Roundup [Designing Sound, an independent publication hosted by CDM]

Here’s a closing thought, not so much about Final Cut Pro X as the sorts of reactions it has raised. It’s clear to me that Apple is under far greater scrutiny — and held to a far greater standard — than its competitors. When Apple does something that users perceive as a misstep, the mythos around the company means they ascribe deep meaning to each decision. It’s a double-edged sword for the company, and must be both a joy and a curse for PR. It’s a mythos Apple themselves and Apple watchers alike have cultivated, so I don’t even know to whom you can ascribe credit/blame.

At the same time, as I’ve witnessed repeatedly covering creative tools, people are rightfully passionate about the software that’s essential to self-expression and, very often, livelihoods.

Oh, yeah, and people generally care more about video than audio. I don’t expect any other pro app but a video app — and from any other vendor than Apple — would inspire a Conan sketch.

I guess for the more obscure music and visual tools we cover, we’ll just have to do our own sketches, minus the pro comedy writers.

I welcome your thoughts on Final Cut Pro X (that may be asking for trouble, admittedly) – and I’m curious if anyone is yet using Motion 5 or Compressor, as well.