In Sand and Pixels, Playing with Worlds Virtual and Tangible; Built with Kinect

In a refreshingly different take, the world of the game Mimicry is the “ultimate sandbox game” – set in a literal sandbox. Participants manipulate piles of real sand, as Kinect-powered cameras track their work and project imagery onto the sand from a rendered analog version of the same world. The player mimics the virtual, the virtual mimics the player, and the stuff of each fuse in a real/virtual hybrid in sand.

All of this really is a game – and the imaginative blurring of tangible and intangible is simply magical, as digital waves lap against sandbox shorelines shaped by your hands. (Magrathea, anyone?) 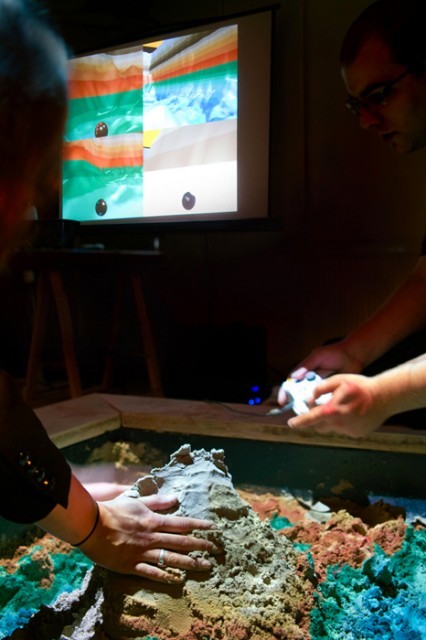 From the press release, more details:

Monobanda has created a sandbox game with real sand, in which up to four players at a time control a ball that can roll around, jump and glide through the Mimicry world. Tiny virtual characters roll around in the sandbox. You can build obstacles for them or create a racetrack.

Rules do not exist, there is no point system. This means you create your own games. According to the makers, the game can be compared to a schoolyard, and is best described as a digital sandbox. The environment in which you play exists in both the virtual and the physical world: a landscape is projected on real sand.

Monobanda’s Simon van der Linden says: “With Project Mimicry we are researching the magic of play.” About the title: “Mimicry is another word for mirroring behavior and looks. When people imitate each other, playful situations automatically emerge.”

Within the sandbox you create your own world. When you make a mountain of sand, this mountain also appears in the digital world. When the mountain is high enough, snow appears on its peak. And if you want a fresh country lake just dig a hole.

And, of course, there’s this obligatory line:

Simon: “We have only scratched the surface of what is possible with Mimicry, and we are looking for companies who are interested in exploring those possibilities with us.” 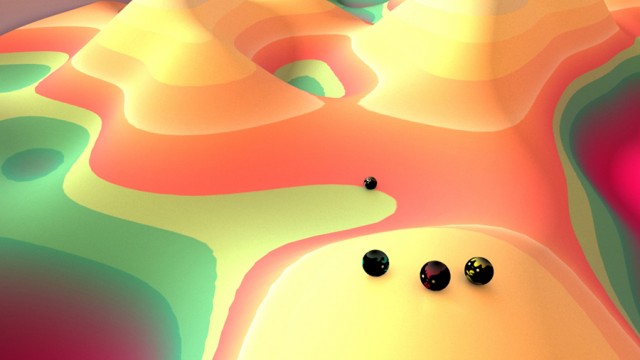 It strikes me that, with a technology that began somewhat clumsily allowing basic gestures and movement, the underlying capabilities of Kinect and similar 3D sensing systems may be in shaping worlds. All of the most compelling applications we’ve seen thus far have moved in that direction, which more than hand-waving could ever hope, begin to realize designs that represent ubiquitous computing.

I hope we get to see more of this project and others like it. And it’s nice to see this work whilst I’m here in the Netherlands, home of the project. Thanks to another Dutch visual lover for the tip – reader Job Jutten.

From the Trenches of the Loudness Wars, A Broad Survey of Research

A Kinetic Sonic Organ Sculpture, Made with Cans

CV
Dispatch is a global matrix, a modulation grid for Ableton Live
gaming
Unreal Engine 5 brings fresh eye candy and patchable MetaSounds DSP
gaming
Explore game worlds of paper, 16-bit DOS, and soaring music to match, from SunVox creator
3Dgaming
New Capcom videopacks turn OP-Z into a novel audiovisual gaming instrument, free
We use cookies and other tracking technologies to improve your browsing experience on our site, show personalized content and targeted ads, analyze site traffic, and understand where our audience is coming from. By choosing I Accept, you consent to our use of cookies and other tracking technologies. Please read our Privacy Policy.