The explosion of physical interfaces for computers continues. But it’s not so much the novelty of the idea as its evolution toward really being able to express ideas physically. Connecting visual expression to hands-on control, the creators of a new book entitled Prototyping Interfaces “sketch” in both the physical/electronic and digital/on-screen realms simultaneously. Color from an object can impact color onscreen, or a wooden knob can give a parameter physical form.

Several things are significant about their effort versus the many other similar projects. First, they have beautiful documentation. (Yes, folks, if you’re scratching your heads wondering why you’re not recognized for your work, lack of high-quality documentation is a good first candidate.) Second, they’re using the incredibly-powerful tool vvvv, the rich visual patching environment for multimedia, which is not nearly as well known as it should be. (Mac users, quit your whining. You can install Windows in about an hour on your MacBook Pro, as they do here, and boot into a dedicated, distraction-free environment.) Thirdly, they take all of this clever experimentation and put it into what looks like a really fantastic reference for learning. (Indeed, it’s so visual, that even if they don’t get around to an English translation, I can imagine even non-German speakers will follow it easily.)

Or to put it in brief: there’s a ridiculous amount of awesomeness in this video and photos, and you’ll want the book, and you’ll want to tear your Arduino off the shelf and just doing something silly and fun with it right now. 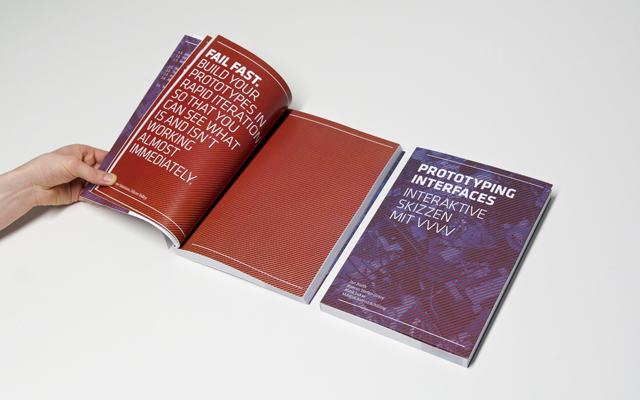 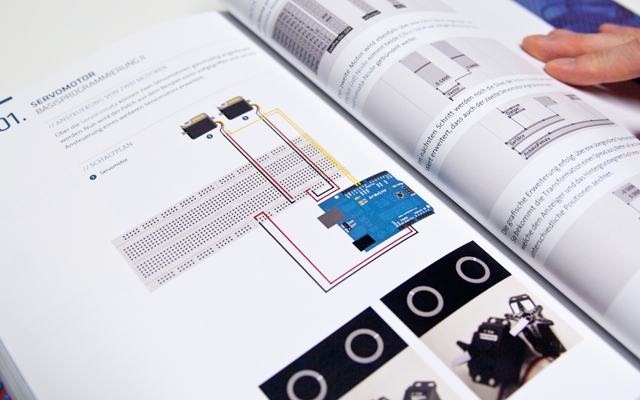 The whole endeavor is, incredibly, an undergraduate student project. Somewhere, many, many professors are feeling old and slow. (Yeah, I knew this aging thing was not going to go well.) The producers, doing their Bachelors Thesis for winter term 2011/2012 at the University of Applied Sciences Schwäbisch Gmünd (that’s not far from Stuttgart, Germany):

Web examples will also accompany the book, with some tantalizing-looking demo videos and instructions. 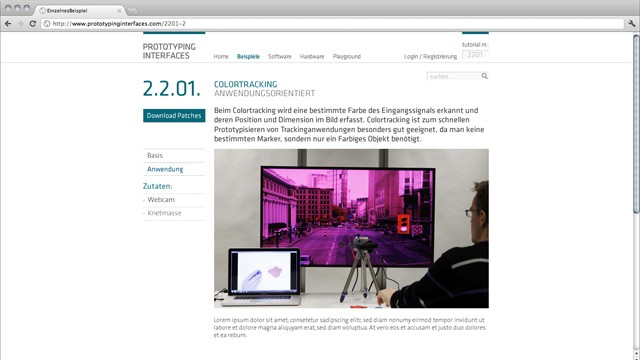 The book “Prototyping Interfaces – Interactive Sketches with VVVV” covers within 280 pages the applied handling of interactive sketches with the visual programming language VVVV. It is divided into two main chapters, a theoretical and a practical part. The theoretical part concerns the definition and the meaning of the term “prototype” in the designprocess. The practical part of the book branches the basics of the visual programming language VVVV and how to control different electronic components with Arduino and VVVV. Beginning from the use of different sensors and actuators to modern tracking technologies like the xBox Kinect, different examples are explained within a wide range of tutorials.
Additional to the book a website is launched within the user finds the patches for every single example described in the book. Also the website provides technical support and a playground which can be used to upload and share private projects.
“Prototyping Interfaces” is addressed to designstudents, interactiondesigners and media artists.
Music: “My Headache” by Wake [freemusicarchive]

No, you can’t get the book yet, but you can follow its progress via the vvvv blog and the project site:
Prototyping Interfaces – Interactive Sketches with VVVV [vvvv blog]

A Massive Bundle of Game Music, the Magical Machinarium Score, and the Quiet Indie Music Revolution