What if film, rather than being projected from start to finish and proceeding in a straight line, could be reconstructed and performed? Every live visual performance involving video has more or less asked that question. But not every performance tries to convey a narrative in the process. Toni Dove’s Spectropia, coming this weekend to the storied Mixology Festival at New York City’s Roulette, does just that, interweaving a sci-fi storyline across imagined future and past through gesture-controlled, computer-vision activated remix.

Just one friendly piece of advice: if you start thinking and feeling the way these main characters do, maybe it really is time for you to leave the Internet.

You can spot some of the action, mixing theater and “scratchable” digital visual performance, in excerpts at top or the trailer below. As the creators describe it:

Spectropia is a sci-fi hybrid featuring time travel, telepathy, and elements of film noir in a drama set in England, 2099 and New York City, 1931, following the Great Crash. Live performers orchestrate onscreen characters through a mix of film, performance, and a system of motion sensing that serves as a cinematic instrument. Spectropia is part video game, part feature film, and part VJ mashing. 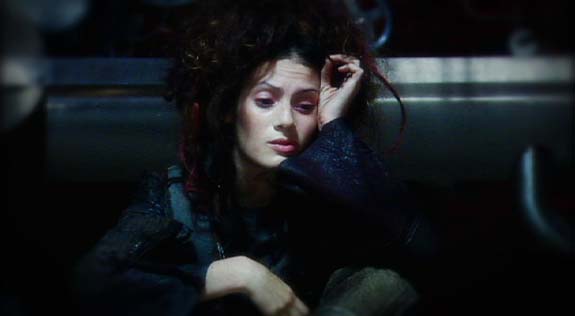 Now, like a lot of digital media performances, this one sees the artists stowed behind familiar silver laptops. But there is a twist here: working with artist and software maker R. Luke Dubois, Dove makes the entire performance gestural. Film and video crews have long used gestures to communicate with each other, but here, computer vision tracks physical movement that controls the performance. It adds additional theatricality to the performance, and adds to the illusion that the video, and time itself, might be manipulated magically by the performers.

True to that spirit of remix, Roulette will present two different versions of the piece this weekend. Tomorrow Friday, they’ll present the piece itself; Saturday, it’ll be reworked as a musical suite with a score by Elliot Sharp. Unlike silent films accompanied by live music, here, they imagine that the live music is accompanied by an improvisatory video – an ideal dear to the hearts of many a visual performer. More information for those of you in the NYC area:
roulette.org/events/

The rest of us can take in an episodic release online; no bridges or tunnels required for viewing. Watch Dove’s Vimeo account:
https://vimeo.com/tonidove

Those videos are coming to “Web, DVD and mobile devices.” (“But, old timer, what’s a DVD?”) R. Luke Dubois is known for his own digital remix-inspired artwork and his involvement in the world of Max/MSP/Jitter.

New Yorker Toni Dove is a name worth knowing, a pioneer over the last couple of decades in pushing forward the notion of interactive cinema, which she expresses as a kind of cybernetic noir.

Hands-on with Koma’s Analog Filter/Sequencer, Gate/Delay, in a Van, with Champagne