Networked Video: With a Sweet Arsenal of Tools, One VJ Telecommutes 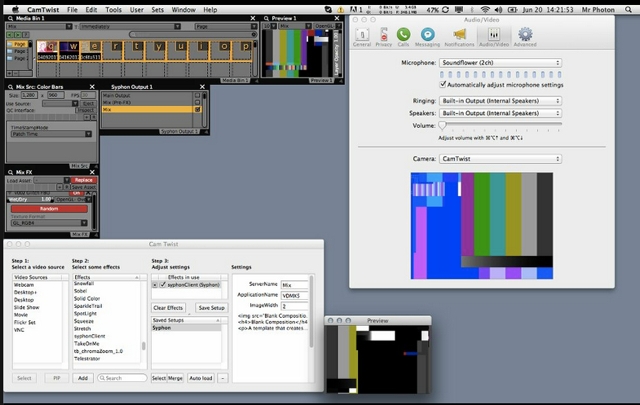 The open source Syphon has liberated textures and video streams from individual apps. No longer is the app a silo. The next frontier: liberate video from the whole computer.

There’s a suggestive post from our friend Jason Scott Furr on his blog:
Telecommuting the mix: VDMX, Syphon, CamTwist, and Skype

The “telecommuting” bit? He was able to tap into a video performance remotely by sending a stream over Skype.

The ingredients are compelling:
CamTwist itself is worth some further inquiry. It’s a “broadcast switcher” inside your Mac, effectively. It works with built-in effects or custom Quartz Composer creations, switches between HD stream inputs, juggles capture cards, and streams to the Web.

Skype, of course, you know.

Syphon, in case you don’t ever read this site, allows video to be streamed effortlessly between Mac apps. (We’ve at least seen a proof of concept of something similar on Windows, though it requires DirectX.)

The trick here is that, because CamTwist supports Quartz Composer, it also supports Syphon – just drop in the Syphon QC plug-in.

But the broader implication here is grand: you could use networks to stream video between computers. And, locally, tools like CamTwist suggest that in the near future, you may wind up buying a little Mac rather than a video mixer – at a fraction of the cost, with an order of magnitude greater capabilities.

We’ll be watching this closely.

Circuit-Modeled Dynamics, Plus One Free Plug-in, From FXpansion

MacSoftware
Soundtoys VST3 beta (with M1+M2) arrives – here’s a round-up of sound design tips and tricks
awesomeness
Make your own MIDI-to-CV adapter in a skull, with a 3D printer and CircuitPython
Software
Looom for iOS makes animating like playing a musical instrument, now with major update
Software
mlre is an expanded version of the classic monome mlr, focused on performance