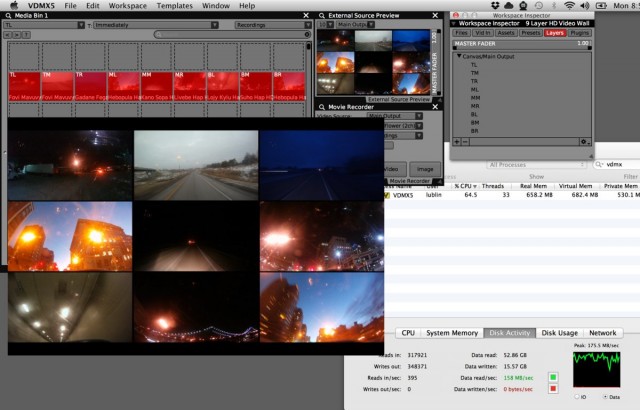 HD videos. Lots of them. Running on an ordinary Mac. (May be time to upgrade to SSD, folks.) Screen courtesy Vidvox, running their flagship VDMX semi-modular visual performance tool.

Hap as in happy sounds about right. Hap is a family of free and open source video codecs for Mac OS X. The notion is that the computer’s GPU – rather than CPU – does the heavy lifting of decoding frames. Because GPUs are optimized for lots of parallel operations in a way CPUs are not, that means the ability to use higher resolutions.

And, best of all, you can get this for free. The code that makes Hap work is already up on GitHub, and you can begin using it right now if you’re in VDMX. I quickly polled some makers of other Mac VJ apps, and all were at least interested in checking it out. (I wouldn’t ask them to go on the record, as this just came out this week.)

Hap isn’t the first codec to do this. Resolume’s clever DXV codec takes the same fundamental approach, decoding on the GPU, and is free (as in beer) included with Resolume’s installers. But Hap promises greater fidelity, among other advantages, and is fully open source, whereas DXV is not. The only real disadvantage at the moment is that Hap is currently Mac-only. But as it’s open source and based on OpenGL, not any particular Mac-specific tech, it seems a Windows version is feasible.

If Hap does make you smile, you can thank Vidvox, makers of VDMX, and their collaboration with developer Tom Butterworth. Tom is a really major player in what’s happening now in video and creativity, as the Glasgow-based developer is co-creator of Syphon, the inter-app video technology, as well as a variety of video and glitch tools; see his site.

And since there are multiple flavors, you can tailor Hap to your needs:

There are three different Hap codecs to choose from: Hap offers the lowest data rates for playing back the most clips at a time, Hap Alpha is similar to Hap with support for transparency, and Hap Q offers improved image quality at a higher data rate.

So, how do you use it? As with DXV, it’s easy, via QuickTime. You’ll see the Hap codecs in your QuickTime exporter (see images). You can then play the videos in any app – even those that lack Hap support. But you’ll need updated versions of your VJ apps to support the codec. For now, that means only VDMX is working, but that promises to change if people do like the codec. (I’d love to see creative coding apps, too, like Processing, OpenFrameworks, Cinder, and the like.) 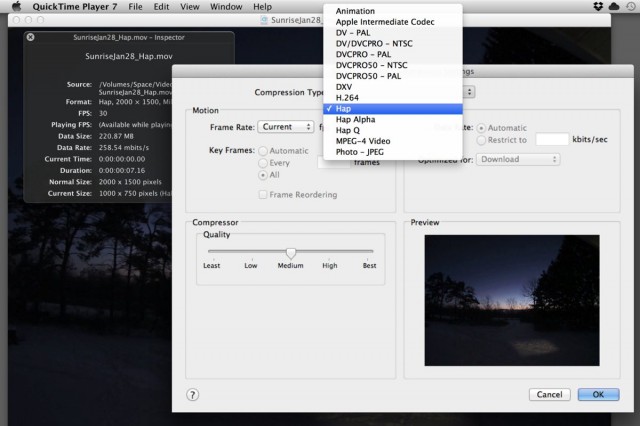 Developers and users wanting to see if this is worth trying out, you can download sample video clips and the VDMX demo to give it a test drive.

Full FAQ and more info on the site. What’s important: all you need is a Mac with a decent GPU (of course) running 10.6.8 or later and (as usual for higher-res stuff) a fast hard drive.