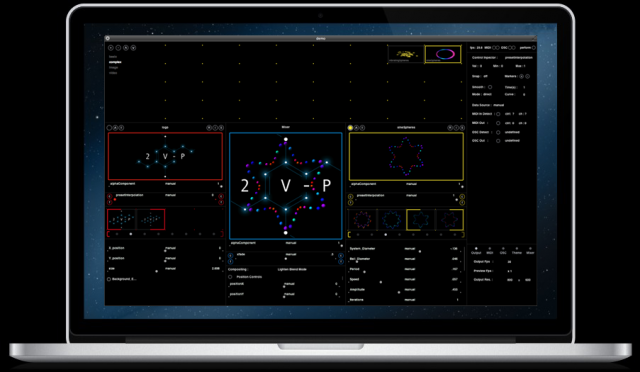 Apple’s Quartz Composer has long enabled beautiful, intricate generative and responsive visuals, often even with simple patches. But assembling its compositions into something with which you can perform is more of a chore.

2 V-P isn’t the first attempt to wrap Quartz’s interactive visualizations into a performance tool. But it might be the most practical. The work of Ali Demirel, with developer Pascal Lesport, it embodies a lot of Ali’s approach to thoughtfully-morphing imagery. It’s been torture-tested in the real world of performance, particularly in Ali’s ongoing collaboration with Richie Hawtin.

What’s promising about 2 V-P is that it centersentirely on a VJ-style two-channel mix structure. It’s focused without being overly limiting. You add video processing on the master bus, just as you would with a hardware mixer. And you can store all your patches on a grid.

That may not sound very interesting yet, until you get to one very powerful notion. You can interpolate between any stored parameters on each channel – any of them. So, by carefully parameterizing your patches in QC, you can build beautiful compositional processes that gradually shift from one element to another. Ali does that really nicely, slowly sculpting mesmerizing visuals over long periods of time – essential if you’re keeping up with extended live sets by Richie Hawtin / Plastikman. But I can imagine that this could adapt well to other artists’ own aesthetic ideas, too.

This is my kind of tool, in other words: simple, but in such a way that can yield a lot of variation.

You get 64 pages, each with 32 slots (all-weekend minimal techno festival, here we come), and automation of every element via MIDI, Open Sound Control (OSC), or keyboard mappings. Drag and drop your files into the grid, map parameters, and play.

The app is also one of the first we’ve seen to be distributed via the Mac App Store. It’s a very-reasonable US$24.99, requires 10.8 or later (though I’d recommend that at this point, anyway, especially with Quartz Composer), and needs a 64-bit processor. It also supports Retina Displays.

I was a little surprised at the App Store choice – sandboxing means you do need to give the app permission to access the file system – but looking more closely at the features, it seems that distribution channel is just fine for this app, particularly as it’s so tied to Apple technologies. (Someday, maybe, we’ll have a truly cross-platform tool that works in a similar way without cobbling together Pd patches and the like. But for now, the $25 app definitely rewards those happily in the Apple ecosystem.)

Basically, if you’ve got a capable Mac, this seems like a must-have, even just to toy around with. If you do anything with it, we’d love to see your work. (Document, people!)

And here’s a glimpse of what Ali does with Richie Hawtin. Ali shared a lot of his project at 2013’s MusicMakers Hacklab at CTM Festival, presented by CDM.