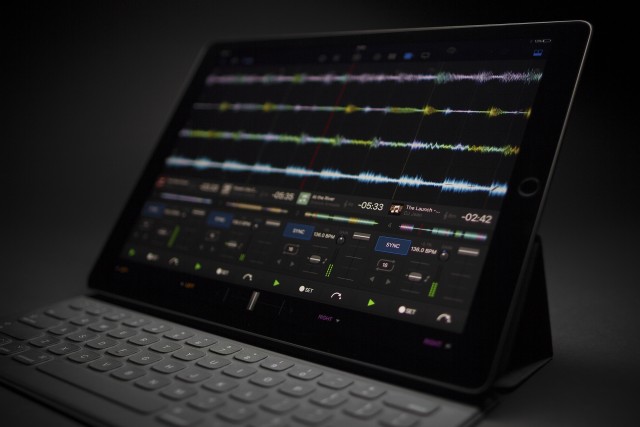 Tablets and laptops, cars and trucks, iPads and MacBooks and Surface and things that have “Pro” at the end of them and don’t… enough.

Let’s ask a simpler question. What would be a music app that would make you want an iPad Pro?

Well, the first potential answer is djay Pro. It’s a new version of a disruptive DJ app, for starters – that will be of interest to anyone with an iPad. But it also includes a design that’s tailored to the new powers Apple has added to the iPad Pro. And whether you want either Apple’s tablet or this DJ app or not, that presents some early indications of how a “Pro” iPad could be different from the ones we’ve seen before. 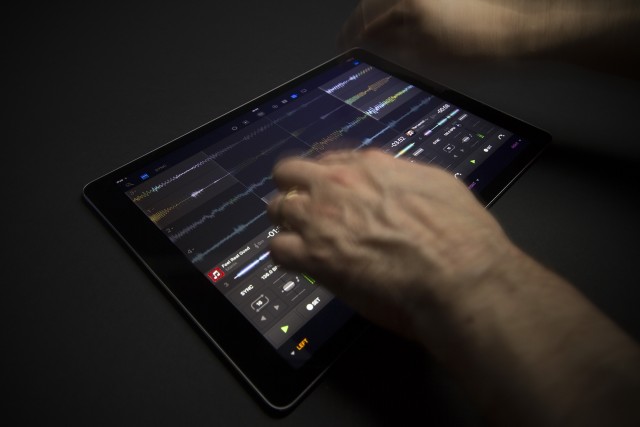 First, let’s be clear: “DJ” itself means a lot of different things to different people. DJ developer Algoriddim have been able to carve out a place in the market partly because they aren’t Serato, Native Instruments, or Pioneer. From the beginning, they’ve made Apple-centric products that are friendlier to beginners, but doing so without necessarily dumbing down functionality. So on one hand, don’t dismiss djay Pro by comparing it to a couple of Pioneer CDJ-2000nexus decks and a boutique rotary mixer. (I just rubbed a Sony Discman and a magic genie appeared, so I will be asking him for that very rig, since I don’t have five grand handy.)

Think of this as something that could easily show up in bar gigs, at weddings, alongside other stuff in the studio, or even for a touring DJ plopped on a bed (or the back of a helicopter, if you’re Tiesto).

But second, don’t underestimate Algoriddim, either. Because they aren’t selling higher-end gear, they don’t have to keep high-end features out of the entry level product.

So put djay “Pro” on the iPad “Pro,” and you get some interesting features you might not expect. 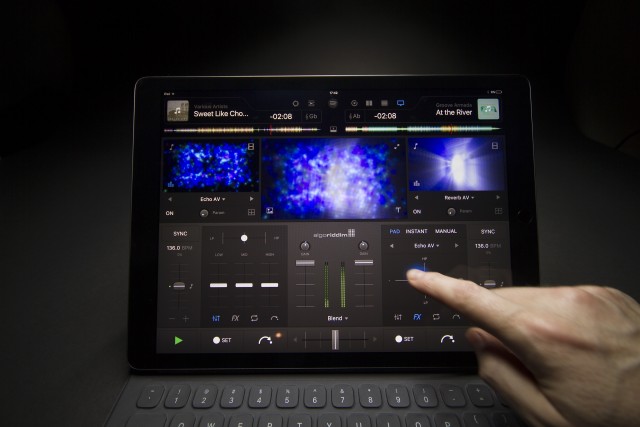 A huge interface. Unfortunately, a lot of the apps we love aren’t yet tailored to the iPad Pro screen. This is, and it looks gorgeous. Part of why I use an iPad mini is because the iPad Air size is still somewhat cramped, so I choose portability. But everything that looked small on the previous iPads looks, weirdly, exactly the right size on the Pro – and this is exceptionally so, enough so that you might finally trade in physical controls for touch. (Well, maybe.)

Massive video power. You can now capture and render full HD video at 1080p. That alone could transform this into must-buy category even if it’s sitting alongside an existing DJ rig. There’s even 4K video support, though good luck working out how to store all that video.

Faster graphics, real multitasking. 60 FPS graphics rendering. And you get the new iOS 9 multitasking integration (slide over and split view). (That can theoretically be supported on other new iPads, too, but I’m told it’s iPad Pro only for djay, which makes some sense.)

Here’s an impressive test Algoriddim shared from their lab showing performance – and yes, no question, this chipset is the future of Apple mobile:

“Okay, fine, sure,” you say, “but I don’t want to carry around a huge tablet and I already have an iPad.”

Yep, right there with you.

Across all models, there are some nice integration features:

And that’s on top of all of this, including connectivity to hardware, because sometimes you really want physical controls and not a touchscreen (and not Apple’s weak audio I/O): 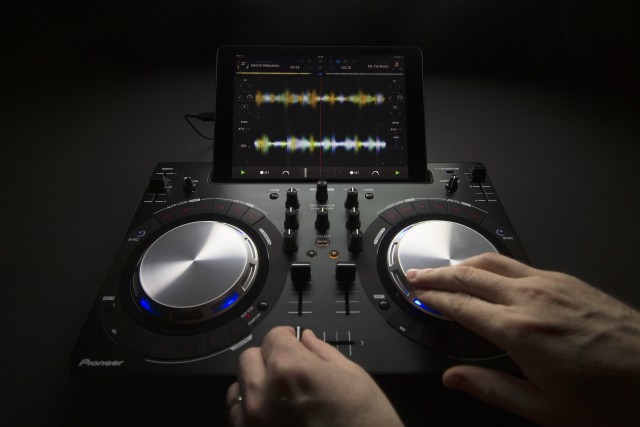 Again, if you use Spotify to find new music, you may already have a reason to run this. (I’ve regularly used it to mess around with mixing new tracks before I buy the downloads. If anyone’s worried about the business model there, I can tell you that the result has been buying even more music. If I start collecting vinyl… yikes.)

At the same time, there’s evidence of why other makers probably won’t jump on the iPad bandwagon: price. This very serious app, with all these features, is only 30 bucks – US$19.99 intro price.

But then, that’s their problem, not yours. And I can’t imagine any music-loving iPad owner who wouldn’t have djay installed. Right at the top of my homescreen.

Software
The best Cyber Monday deals you can get now on synths, plug-ins, and more
Softwarevideo
MadMapper 5.2 is here, with more lasers! (and DMX CSV, Xbox controllers, and Kinect)
appsiPadSoftware
SAND hosts your iOS plug-ins, sequences them with patterns, records them
Software
The very best Black Friday and Cyber Week deals on music and motion – a running list