Here’s what’s happening at Beatport after the SFX bankruptcy

The media landscape is changing, from Apple moving to streaming and adding content on Apple Music and Apple TV, to SoundCloud adding paid subscriptions and signing deals with majors. Meanwhile, the biggest player in dance music, Beatport, is about to be untethered from the EDM conglomerate that bought it.

SFX Entertainment is putting Beatport up on the auction block, with the sale date set for May 3. (SFX first acquired the company back in 2013 for $50 million, then launched streaming in 2014.) For now, that has no impact on you: Beatport is up and operating normally, labels are getting paid, and so on. It just means new ownership and freedom from SFX, very soon – and meanwhile, the company is operating independently.

SFX had a sprawling vision for Beatport and its other purchases. As I put it in December 2014, the idea was all about synergy. SFX was going to own the festival, the ticketing, the site you visited to learn about the artists, even things like the agency building an app you used at the show or that did visuals onstage. So, what went wrong? Well, the short version is covered by Billboard in their February analysis of the SFX bankruptcy filing. Losses at the festivals racked up, and the brands and advertisers who were supposed to deliver much of the new revenue never really materialized. The sprawling multi-faceted agency structure SFX devised lost money and created confusion, and acquisitions like Beatport seemed to do worse under SFX ownership than before. There are questions about how SFX implemented its plans, but there’s also a real sense that they were pointed in the wrong direction to begin with.

With controversy and allegations of mismanagement swirling around SFX brass, I think most producers will find the Beatport sale to be good news.

Revealed in those bankruptcy filings, Beatport did lose money, too. (CDM asked why that was; see the answer below.)

But there’s a lot of reason to think Beatport is valuable to a would-be buyer – as it is to many of us making electronic music. There’s simply no other property that provides what Beatport does for its particular niches. The combination of streaming with a store, the deep label catalog and navigational tools, the Beatport Pro desktop client and DJ software integration, the mobile apps – Beatport is more ambitious in what it provides than any rivals. And the core assets at least have been big revenue centers not only for Beatport itself, but for labels – including many tiny labels – that sell on the store.

Since the fall, the site has already been seeing some under-the-hood changes intended to improve the experience for users. I spoke to a Beatport spokesperson to find out what has changed and what they’re working on – and what this sale may mean for you. None of this can answer what will happen following the sale, but it does provide some picture of the state of Beatport today. 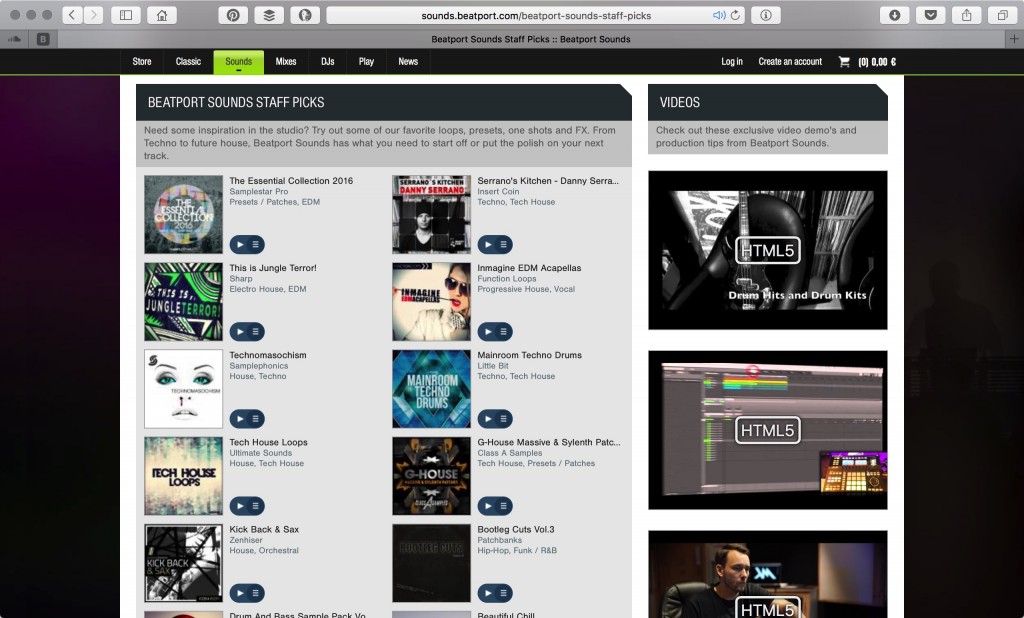 CDM: Can you explain to our readers what happens now that SFX is selling Beatport? There are a defined number of buyers now that have signed NDAs? (I know the identity of the buyers, in turn, can’t be indicated.) What happens if they don’t find a buyer?

Beatport: We’ve been contacted by, and are in discussions with, numerous companies interested in Beatport’s complete platform (store, streaming, video, etc.). The level of interest speaks directly to the value of Beatport and makes the chances of not finding a buyer highly unlikely.

What will happen on Beatport the site during this process?

The site will continue to be fully supported. Nothing is going to change as a result of the sale process.

Payments to labels I understand are now back on track. Those should continue without issue during the sale?

Yes, the sale process has no effect on label payments.

Ed.: Beatport did not respond to CDM’s request for comment as far as the payment delays last summer. However, we are assured that payments have been on schedule since then and continue to be. 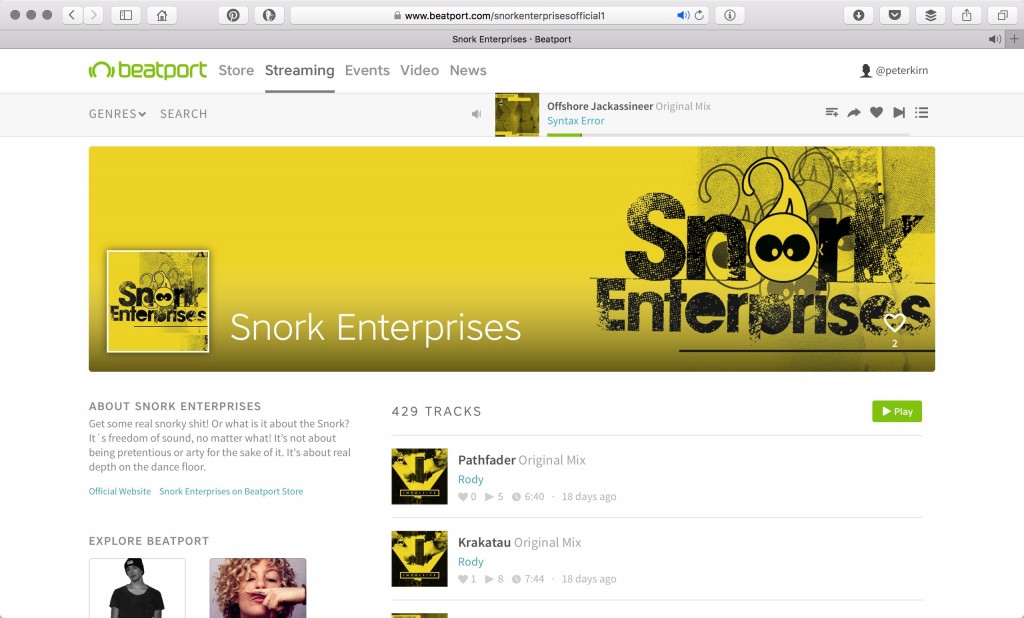 What about losses reported during SFX’s ownership, as part of the SFX bankruptcy following – can you comment at all on what the source of these losses were?

Last year’s loss was a result of two things. First, we invested in several new features and products such as a streaming music platform, an expanded media property, launched a Dutch localized version of the site, and increased our attention to video. These are all things that prospective buyers might find interesting, so while they carried a cost, the investment was clearly a worthwhile one. Now, a buyer can acquire these components of our platform without having to invest in their creation.

The other factor was a loss in revenue experienced by the store. While part of this can be attributed to the overall downward shift in digital downloads, it’s also due to changes made to the store in 2014 (both technology and focus) which as you’ve noted we have been actively reversing for the last 6 months.

There were some changes in management, correct, now as the company transitions? Are there any you can point to as far as the leadership team?

Greg Consiglio is still President and CEO and our management team has remained largely intact. The only update is the promotion of Terry Weerasinghe to SVP of Marketing & Analytics, located there in Berlin.

As a Beatport user, I’ve noticed some changes since the fall – and particularly in February. These seem to bring the store back front and center and restore some functionality that I found missing in Beatport Pro. Can you comment on any ways in which the site has changed recently or evolved, and what that means in terms of functionality? Does this bring back some of what people were missing after the Pro transition?

Yes, there have been a lot of changes, thanks for noticing. On the navigation front, we made the store the first page you see again when visiting Beatport.com. We also updated the navigation so that each page flows together better and can be reached from any other section of the site. Finally, each site section has its own sub-navigation menu to better highlight the important features of each (for instance the store subnav now highlights tracks, releases, stems, sounds, etc. for immediate access), and users can now shop and sort all tracks in various ways like they could with previous versions of the site. Check out the blog post explaining it all here: New Menu, New Navigation, Same Beatport.

In terms of functionality, we’ve not announced anything yet, but there’s been a lot of under-the-hood development to improve our time-to-interact speeds (a more important metric than page load) which we’ve cut in half since the beginning of the year and continue to actively work on. There’s also ongoing work fixing bugs, applying the store filters more broadly across the store, and optimizing (or even completely removing) images.

Finally, we recently began conducting some A/B testing, mostly bringing back or even improving some Classic features, so some users will notice those differences.

You’re correct in that many of these changes began last fall, which is when the store became the front-and-center focus again. Much of it has been under-the-hood stuff but soon there will be more noticeable usability changes that will be more obvious. Much of what we’re working on stems directly from the feedback we get on our Uservoice Forum, so any comments are welcome. 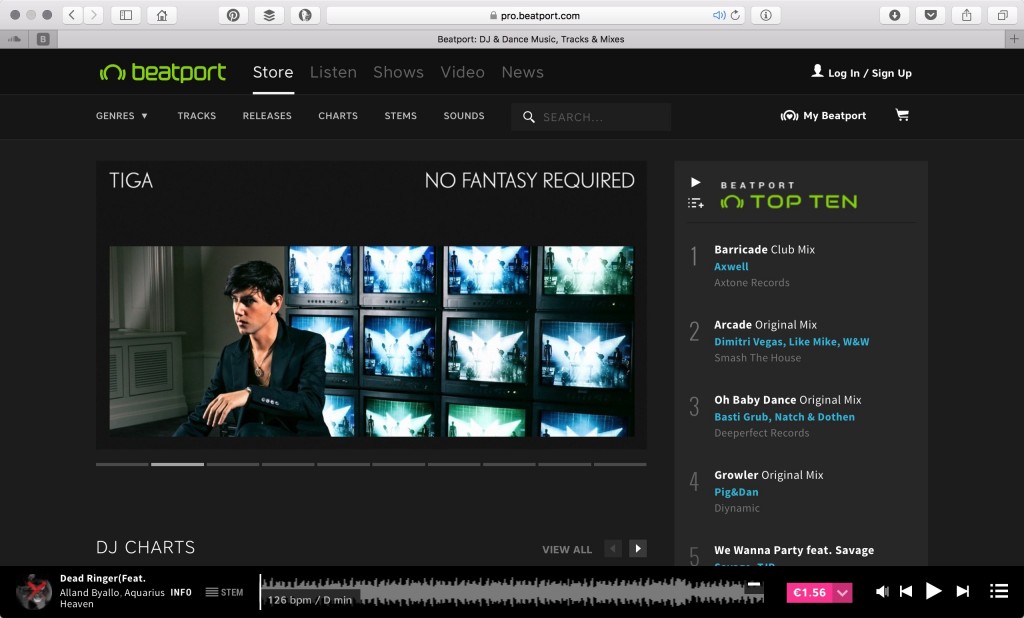 Yes, as noted in the prior question, we made the navigation between sections of the site easier. Every track streamed has a buy icon to purchase that track in the store. (I should note we legally have to keep the store and streaming sections separate. That’s a music licensing thing.) Ed.: Possibly a topic to investigate separately, as the direction of download sales and streams is of course of interest to us.

As for overall performance, we don’t release streaming traffic figures. But we did add some features since launch, specifically an embeddable player for any tracks available for streaming and we’re curating playlists more around themes important to our community — such as The Visionary Women of Electronic Music for International Women’s Day or Detroit Techno Heroes for Black History Month.

Streaming is entirely ad-supported, correct? Is there anything you can tell us as far as how that has performed?

Right now streaming is monetized through sponsored playlists and banner ads. We haven’t announced other monetization plans yet but I’ll let you know as that develops. No performance updates to share at this time but the catalog available has grown to over 4 million, with new content being added daily, and over 40,000 playlists created by in-house staff, guest curators, and users.

Is the app also ad-supported?

Not exactly. The same sponsored playlists are available, but there are no banner or audio ads at this time.

For more on Beatport’s changes, the site has just posted some information on performance tuning.

SX on how they make electronic gospel so good it “Hurts”