If you think computers aren’t advancing for audio, you haven’t been paying attention to connectivity. The latest generation of OSes, computer architectures, and audio interfaces can combine to give you lower latency and easier connectivity. They can even connect over long distances and networks. MOTU and RME this month unveiled cross-platform Thunderbolt support that works on Windows – and MOTU have been focused on connectivity in a series of updates.

Thunderbolt arrives. Let’s skip all the normal technical details of different buses and specifications and throughput numbers. The point of Thunderbolt is, it works really well. It works well enough in audio applications that you can finally stop worrying about it. You can plug and hot-plug audio interfaces and expect good performance. Mac users with one of a handful of Thunderbolt interfaces have known this for some time, but now Thunderbolt is becoming widespread on Windows. And that means more interfaces for everyone – and more cross-platform compatibility.

The best news so far came at Musikmesse this month. MOTU, who have deepened their specialization in interfaces of late for both audio and visual applications, announced they’re bringing Thunderbolt support to Windows with their latest ASIO drivers.

MOTU runs on a unified driver model, so this update impacts a lot of different interfaces and multiple architectures at once. Thanks to improvements in Windows, as well as on the PC in general, MOTU says the drivers include enhanced performance all around. So even if you’re still on USB, you get what they say is “best-in-classs” round-trip latency. That’s consistent with what I’ve heard from Windows audio developers. (And yes, the likes of Cakewalk, who have stood by this OS so long, as seeing that patience pay off.)

That’s good for everybody, but of course the big news is Thunderbolt support. With some great new machines shipping with Thunderbolt onboard, you can now take advantage of that architecture. So, for instance, you can connect something like the 1248, 16A, 8M or 112D (massively multichannel, AV-friendly boxes) and get up to 128 channels of simultaneous input and output. That’s overkill for a lot of music applications, but on the other hand, you also get hot-swappable, low-latency performance if you just want to use those interfaces to connect to your studio.

By the way, back on the Mac, there’s another story, called AVB/TSN. MOTU added that to these same interfaces in an update the company shipped for free in March.

What’s AVB/TSN? Well, here, it allows you to connect those same MOTU audio interfaces via a standard Ethernet cable (CAT-5e or CAT-6). And that means you can run cabling up to 100 meters while streaming 64 channels. For venues and other similar applications, this is huge. You need El Capitan OS X 10.11, but this might be a reason to upgrade. 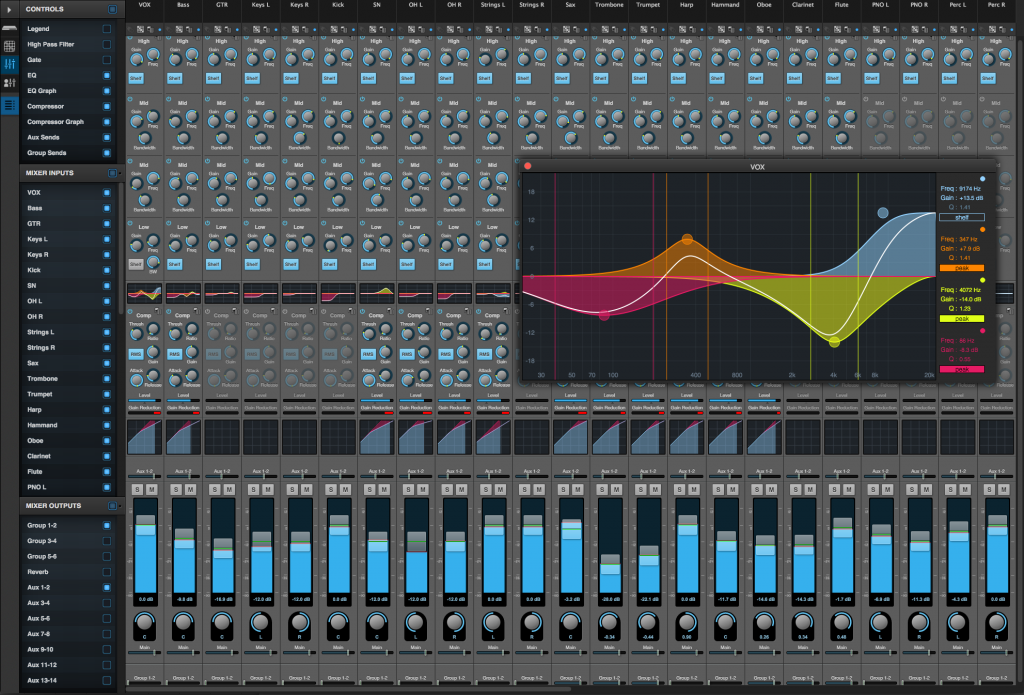 Another set of updates from MOTU includes free, powerful mixing and processing tools for their interfaces. This UI is actually running over the Web, not in native software – which is ideal for long cable runs and networked interfaces. Image: MOTU.

So, in review, MOTU now lets you hot-swap their popular interfaces between Mac and PCs with Thunderbolt, has made USB work better on Windows, and has made long Ethernet runs possible on the Mac.

Also, those interfaces have seen a steady stream of updates, including preamp remote controls over a network (useful with those long cable runs), a graphic EQ and compressor, SMPTE support, LTC to MIDI time code conversion, a plug-in that generates SMPTE over a network, authentication over a network, and more.

In short, if you had at some point wondered what happened to MOTU and DP, here’s your answer (in case it wasn’t already clear). They’ve quietly become the singular vendor that excels in connectivity, networking, and audiovisual applications, in niches others don’t touch. There was a time when it seemed like Apple would go after those sorts of applications with Final Cut and Logic, but these days, Apple just gives you the computer and the OS and leaves these high-end niches to their third parties.

All this stuff in one place:
http://www.motu.com/nextgenaudio

Germany’s RME is another trusted and enduring name in this market, now turning 20 years old. And they’re also providing evidence that Thunderbolt pro audio has arrived.

RME finally has their own first Thunderbolt interface, and it’s supporting both Windows and Mac OS X out of the box. With both hot-pluggable USB 3.0 and Thunderbolt onboard, you can more or less connect it to anything; there’s also optional ARC USB remote control.

Just as MOTU has its adherents, so too RME has won fans for its low-latency hardware and drivers. And the UFX+ is now up to 188 channels, MADI I/O, easy recording (via what they call Direct USB Recording), DSP for latency-free routing, and a ton of I/O connections – even including MIDI DIN.

The box is so new their website isn’t even updated yet. (Right now I see only the original UFX.)

But with RME and MOTU onboard, I suspect we’ll have a lot of happy audio users.

Let us know if you’re interested specifically in any of these boxes and what questions you may have about connectivity and OSes, drivers, and the like, and I’ll see if we can get more information from the vendors.