iZotope Mobius and the crazy fun of Shepard Tones

iZotope have been on a bit of a tear lately. The company might be best known for mastering and restoration tools, but in 2016, they’ve had a series of stuff you might build new production ideas around. And I keep going to their folder in my sets. There’s the dynamic delay they built – an effect so good that you’ll overlook the fact that the UI is inexplicably washed out. (I just described it to a friend as looking like your license expired and the plug-in was disabled or something. And yet… I think there’s an instance of it on half the stuff I’ve made since I downloaded it.)

More recently, there was also a a plug-in chock full of classic vocal effects.

At its core is a perceptual trick called the “Shepard Tone” (named for a guy named Shepard). Like the visual illusion of stripes on a rotating barber pole, the sonic illusion of the Shepard Tone (or the continuously-gliding Shepard–Risset glissando) is such that you perceive endlessly rising motion.

Here, what you should do for your coworkers / family members / whatever is definitely to turn this on and let them listen to it for ten hours. They’ll thank you later, I’m sure.

The Shepard Tone describes synthesis – just producing the sound. The Möbius Filter applies the technique to a resonant filter, so you can process any existing signal.

Musical marketing logic is such that of course you’re then obligated to tell people they’ll want to use this effect for everything, all the time. EDM! Guitars! Vocals! Whether you play the flugelhorn or are the director of a Bulgarian throat signing ensemble, Möbius Filter adds the motion and excitement every track needs!

And, uh, sorry iZotope, but as a result I find the sound samples on the main page kind of unlistenable. Of course, taste is unpredictable, so have a listen. (I guess actually this isn’t a bad example of a riser for EDM so much as me hating those kinds of risers. But then, I like that ten hours of glissandi above, so you probably shouldn’t listen to me.)

Anyway, I love the sound on percussion. Here’s me messing around with that, demonstrating the ability to change direction, resonance, and speed, with stereo spatialization turned on:

The ability to add sync effects (and hocketing, with triplet or dotted rhythms) for me is especially endearing. And while you’ll tire quickly of extreme effects, you can certainly make Möbius Filter rather subtle, by adjusting the filter and mix level.

Möbius Filter is US$49 for most every Mac and Windows plug-in format. A trial version is available. 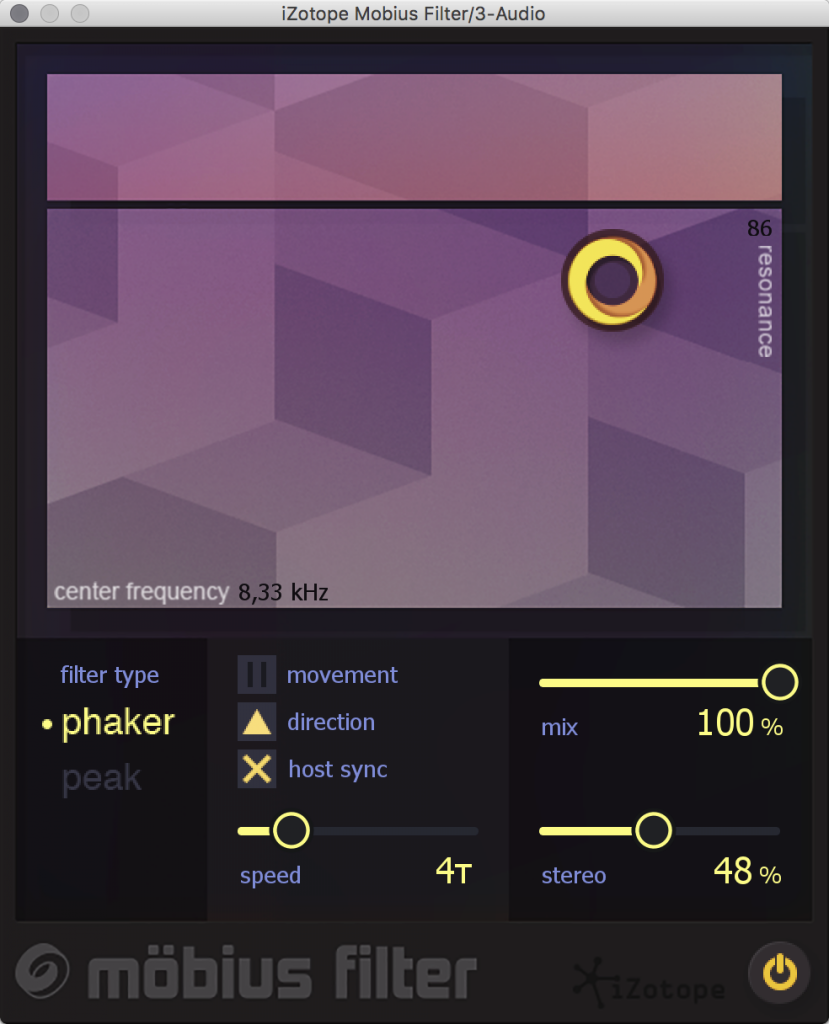 It’s worth learning more about the Shepard and Risset techniques in general, though – get ready for a very nice rabbit hole to climb down. Surprisingly, the Wikipedia article is a terrific resource:

If you want to try coding your own shepard tone synthesis, you can do so in the free and open source, multi-platform environment SuperCollider. In fact, SuperCollider is what powered the dizzying musical performance by Marcus Schmickler CDM co-hosted with CTM Festival last month here in Berlin. Here’s a video tutorial that will guide you through the process (though there are lots of ways to accomplish this).

The technique doesn’t stop in synthesis, though. Just as the same basic perceptual trick can be applied to rising visuals and rising sounds, it can also be used in rhythm and tempo – which sounds every bit as crazy as you imagine. Here’s a description of that, with yet more SuperCollider code and a sound example using breaks. Wow.

Finally, the 1969 rendition of this technique by composer James Tenney is absolutely stunning. I don’t know how Ann felt about this, but it’s titled “For Ann.” (“JAMES! MY EARS!” Okay, maybe not; maybe Ann was into this stuff. It was 1969, after all.) Thanks to Jos Smolders for the tip.

So, between Möbius Filter and SuperCollider, you can pretty much annoy anyone. I’m game.

Get some inspiration in the magic of field recording

effectsLinux
MOD Devices made a guitar synth you can actually play like a synth – so your guitar is the CV
MacPlug-insReviews
EboSuite 2.0 hands-on: live video recording and more makes VJing feel native in Ableton Live
MacWindows
The best way to integrate Ableton Live and Eurorack modular – for any rig
Reviews
Hands-on tour of the Oberheim OB-X8 architecture, feature by feature, with Francis Preve