Listen to how pop hits have evolved over the years

There’s a simple antidote to the endless circular “pop music was better in the old days” debate: actually listen to the songs. A new interactive tool lets you do just that. But warning: it may not be as pleasurable to turn back time as you think.

We all know how this goes – music used to be better, and then accelerating in the digital / Millennial-driven age of the past decade or so, it got much worse.

The problem is that your memory of pop music past is already filtered to what you like, whereas a listen of the current top pop hits isn’t. That means that when we recall the great music of the past, while we will invariably think of some chart-toppers, we’re also likely removing a bunch of stuff that didn’t stand the test of time.

Now, I can explain that, but it’s much easier to hear it. And an interactive Flash-based tool, calling on streaming music, does just that.

There’s a little subtle editorializing by the creators. Apart from hoping this will shut you up about music in the old days, the player by default whisks you to 1997. That’s two decade ago – so if music has gotten steadily worse, it should be at least marginally better than what you’ve got now – but it takes you straight to Hansen’s “MMMbop.” No amount of 90s nostalgia is likely to help you forgive that number, or at least you can’t rank it terribly high as far as lyrical sophistication.

Some other trends are clear. Musical genre and instrumentation have changed – literally, pop music now is basically unrecognizable from pop music in 1958. The year I was born, 1978, is dominated by disco. The constant is change itself, if anything, more than it is something we might measure in quality. Loudness wars are real, too, but we might recall that this is partly the impact of corporate-owned radio trying to sound as loud as possible, combined with technological advancements in both processing and listening devices (for better or for worse).

Nor is any of this linear. Cue up 2015, and you’re treated to Mark Ronson’s “Uptown Funk!” – a clear stylistic throwback.

Another significant change is how much more dominant non-white and female artists are in recent music. It’s significant to note the impact of payola and out and out racism on the charts from decades past – another reason why I think, whatever musical merits they might have, complaints about today’s music need to be judged with some suspicion.

Even having made these arguments before, though, I’m struck listening by how much unremarkable music is on the older charts. Some stuff is simply terrible; other tracks are fine but dated or bland. Musical quality may not always progress, and no one who believes in independent taste is going to celebrate the commercial music industry to begin with. But one thing we do have is some benefit of distance in judging music.

Oh, and by the way, I also find that even as I’ve defended recent pop, the pop music on charts from the past few years is often actually pretty darn good. It’s louder, it’s more digital, to be sure – but it also shows some bravery in production and sound and there’s some good writing. Basically, whatever the year, pop charts have some cheese and some substance, and you have to do your own filtering. But isn’t that what you’d expect in a mass media popularity contest? Wouldn’t you expect that sometimes the masses do latch on to things you’d like some of the time, and at other times don’t?

Sure enough, the folks at Polygraph have other experiments hooking into Spotify and so on that explore these issues.

Most significant is a set of charts that compares chart performance from when a track was released to its play count on Spotify today. Some of those results are puzzling – I’m not sure why Spotify fans prefer the Bee Gees over Gloria Gaynor, exactly. Others are telling: Nirvana’s “Smells like teen spirit” is simply a lot more popular than it was when it came out.

And, as usual, looking at the Spotify results – there’s no accounting for taste. 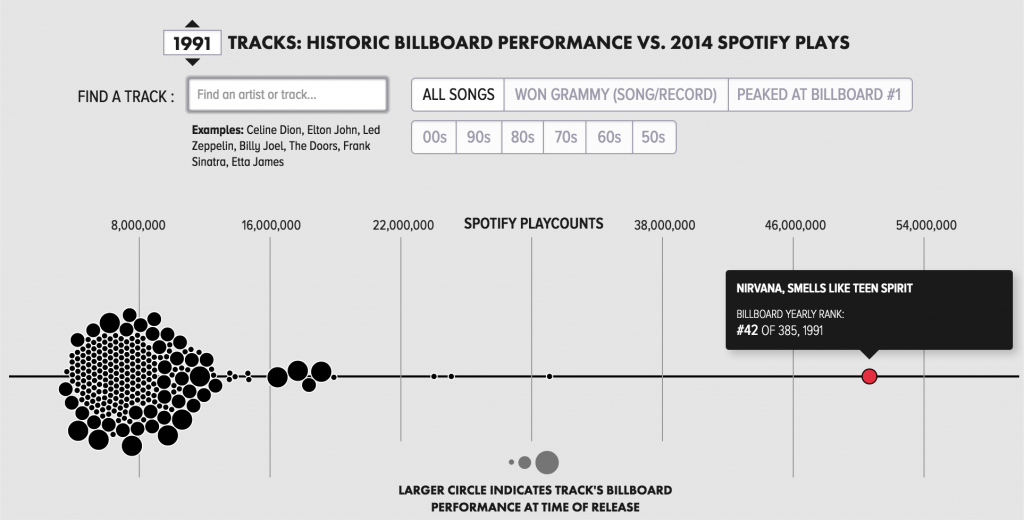 And these tools should tell you the other fundamental difference between Now and Then: now we have a lot more data. We have actual listening data, thanks to streaming, and not only sales. We have the ability to instantly listen to any song, ever – as this tool demonstrates. And I think we have so much data, in fact, that it’s almost impossible to predict what the impact of data will be on the business.

Tony Visconti got a little worked up at this year’s South by Southwest, fashioning a dystopian science fiction story:

Taking place 10 years in the future, the story revolves around a senior A&R expert at the planet’s only remaining major record label. (It’s called The Universe.) Businesspeople around the world sync their schedules by taking drugs that block their circadian rhythms, letting them control their sleep schedules; the label releases just one single a week, recorded by the winner of a lottery and crafted by the label’s employees. The A&R employee spends entire days listening to Jimi Hendrix records and dreaming of the good ol’ days. When he begs his boss to sign a talented street musician, he’s told signing artists based on talent is too risky. Distraught, the employee commits suicide by leaping from the balcony of his Sydney condo. Visconti started getting choked up as he read the story’s final lines.

While I have indescribable respect for the man, it seems while he may think he’s some sort of combination of Philip K Dick and Arthur Miller … he should possibly stick to the music business.

It’s unclear how much real input Mr. Visconti has for this vision. For one thing, even his story is revealing – it’s fully rooted in the old music business, since it ignores the fact that recording and releasing and even promoting music now takes far less risk than it once did. It may get the big pop side of the equation right, but it ignores plenty of other trends. And no matter how talented he may be, Visconti lacks a certain humility in failing to recognize the fact that his own evaluation is effectively self-centered on the model of his own career. (Well, they did ask him to speak, so he’s certainly entitled to that perspective – and we should listen – but we should also assume it won’t paint a complete picture. Or produce great sci-fi.)

The real question I have: with access to data like Spotify’s, how long will something like a Billboard chart – or even the pop moniker – remain relevant? Is it great pop music that’s endangered, or old-fashioned charts? My money is on the latter. In the meantime, we’ll keep listening.

Oh, and the one thing that is definitely dead? Your productivity. Now that you have those links. Sorry. (Yes, what will kill music will actually be interesting interactive infographics, because we’ll all fail to get work done. I need some of those circadian-rhythm destroying drugs about now.)

Previous rant on the topic:
Music is getting worse, unless, of course, it isn’t

McDonald’s in the Netherlands lets you DJ with your placemat