Protesters in the United States today are introducing “A Day Without a Woman” on International Woman’s Day.

And that’s really the point. When we talk about gender equality in music, we’re not simply talking about achieving a balance of the sexes for the sake of doing so. We’re talking about the dangers of suppressing talent and potential. And if we do that, everyone who genuinely loves music loses. Gender balance isn’t even diversity – it means we’ve failed to even get to the diversity discussion because we haven’t gotten past the most basic obstacles around someone’s sex.

But that’s the negative formulation. And I think it’s more compelling to look instead at this simple fact: when electronic music is thriving, of course it’s not only men, and of course the music is better.

I feel personally obligated to acknowledge this, not only as one of the guys who have been come to be seen as the norm, but because I wouldn’t be making music the way I did without the women who have been role models and teachers and supportive friends. They’re part of my own identity, and I would deny my own being if I failed to acknowledge my debt to them.

To look at whole swaths of time is overly reductive, though. So instead, here’s just one tiny microcosm in the form of a compilation album from 1977. And I think reading the text that accompanies that album tells us a lot. On one hand, it suggests we haven’t come nearly as far as we should in gender equality in electronic music. (Those discussions should be irrelevant by now, you’d hope, and yet, it seems we’ve even slid backwards since the 1996 afterword.) On the other, it suggests without women in electronic music, we would never have gotten to where we are. 2017 electronic music isn’t even, well, possible. That seems a debt we have to admit – irrespective of our particular sex.

I stumbled on this particular album just digging through old Laurie Anderson releases around her appearance last weekend; it was her first commercial LP. (None other than Philip Glass put her up to it.)

For electronic music nerds, you’re likely to hang on every word – there are fascinating stories embedded there. But I’ll skip to some significant tidbits. Most importantly, this was an all-female compilation that intentionally didn’t advertise itself as such, instead loosely taking the title of a Mills College course, New Music for Electronic and Recorded Media. 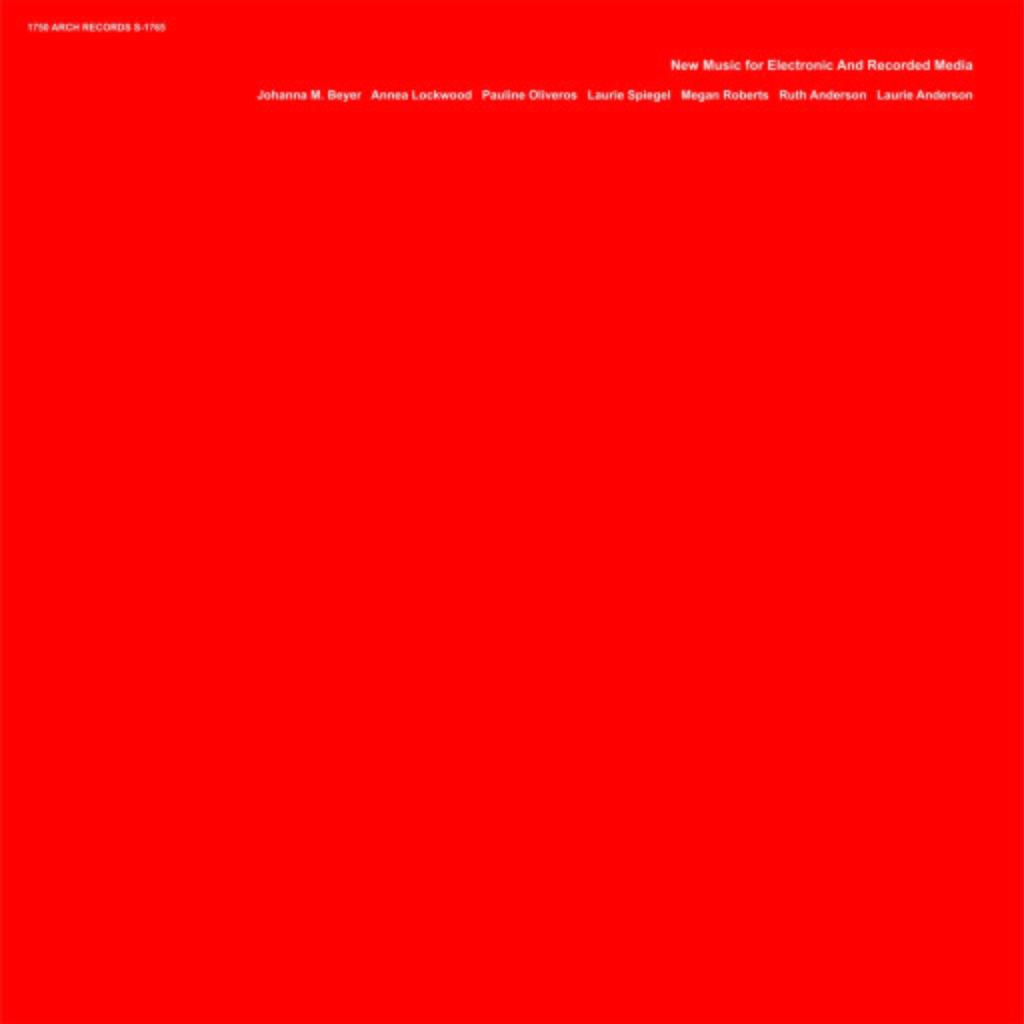 The music on this album exhibits an exciting, wide-open, freewheeling approach to the medium of electronic music which has come to be typical of this genre in the late 1970s. No longer are composers obsessively concerned with the agonizing, expressionistic, and purely “electronic” (synthesized) sound formulas that marked much of this music composed between the mid-Fifties and the late Sixties. Instead, today we have composers willing to mix media and sonic materials in thoroughly inventive ways to achieve ends that are new-sounding, and often more engaging, than that of the “academic” avant-garde.

This is the outgrowth of a fundamental change in concerns which has been evolving not only among the composers on this album but also in a growing segment of the musical avant-garde, of which these members are some of the most fecund and inspired. These new sources of inspiration certainly were not as widely shared fifteen years ago. Several composers represented here are deeply concerned with Eastern influences: meditation, healing, trance, states of serenity. Others are inspired by traditional (or “ethnic”) musics and their subsequent metamorphoses into such popular forms as rock-and-roll. Still others bring to bear a sense of wit and satire, rarely a prominent feature of avant-garde music in the early 1960s.

(I realize the text I’m quoting here comes from a man, but – well, two things. One, go listen to the music, as that says everything. Two, labels and curators run by women shouldn’t be the only ones selecting and sharing female artists – in 1977 or 2017. The role of anyone collecting and sharing music ought to be able to look beyond themselves, in every dimension.)

That’s nothing short of the seeds of the spectrum of electronic variety we have to day.

And then there’s the clincher: this change is possible partly because men and women worked together:

Particularly in the United States, where the struggle of the women’s movement has been waged most successfully, there have been a great number of composers such as Pauline Oliveros, Annea Lockwood, and Laurie Anderson, whose music has been instrumental in beginning trends and influencing others to carry on similar experiments in veins which they first have mined.

It’s political – and that makes for different music.

But you know, let’s not get too caught up in the abstract or the political, because just this one album I think deserves to be heard. There’s a stunning recreation of almost unknown German composer named Johanna M. Beyer. There’s the stunning organic music of Annea Lockwood, whose work on healing and sound is way ahead of the curve. There’s landmark Pauline Oliveros, the elegant sparseness of Laurie Spiegel … and the list goes on.

Laurie Anderson here is especially charming, and – minus the anachronism of land line telephones, surely recalls today’s arts life. I’m going to put this track on as an auto-responder, maybe.

This is in no way representative. My point is, you can needle-drop on electronic music and find that the role of women is profound. (This does happen to be a nice record to needle-drop on — thanks to 1750 Arch LP, the adventurous Tom Buckner label from Berkeley, California. But there you go – now we need some 2017 netlabels to do the same.)

And that deserves a reminder. Because even in the midst of advocacy for improving gender balance, we have to be clear about the role women have played. “Male-dominated” is a description of men’s exertion of power, not of the depth or value of our relative contribution.

But this is why ultimately whatever obstacle we find in music – gender, sexual orientation, race, income, geography – everyone can be a partner, and everyone can benefit. If you love music, overcoming those barriers and allowing more people in is never a burden. It’s a privilege. It’s a pleasure. And if anyone behaves otherwise, be immediately suspicious – or, better yet, get away from them and find some real music lovers. Life’s too short. So yeah, happy International Women’s Day.

Demian Licht on transmitting knowledge, being a demon of the light

Behringer to make an analog Minimoog clone for around $400

listening
These are the voices of resistance: interviews from Iran, female-nonbinary radio takeover
Laurie Anderson
Ars Electronica, in scale from microcosm to epic, examines a planet on the edge
history
NI has retired Absynth soft synth after 22 years; here’s a statement from its creator
listeningusa
Techno meets graphic novel: Alan Oldham’s Johnny Gambit is back to the future