Pioneer made a CDJ-shaped sampler – what does that mean for DJs?

Japanese giant Pioneer continue their march to expand from decks and mixers into live tools for DJs. The latest: a sampler in the form of the ubiquitous CDJ.

This isn’t Pioneer’s first sampler/production workstation. The TORAIZ SP-16 already staked out Pioneer’s territory there, with the same 4×4 grid and sampling functions. And the SP-16 is really great. I had one to test for a few weeks, and while these things are pricey and more limited in functionality than some of the competition from Elektron and Akai, they’re also terrifically simple to use, have great build quality, feature those lovely Dave Smith analog filters, and of course effortlessly sync to other Pioneer gear. So it’s easy for loyal owners of other gear to laugh off the pricey Pioneer entry. But its simplicity for certain markets is really an edge, not a demerit.

The DJS-1000 appears to pack essentially those same features into the form factor of a CDJ. And it lowers the price relative to the SP-16. (suggested retail is €1299 including VAT, so somewhere in the US$1200 range or less)

Features, in a nutshell. Most are copied directly from the SP-16:

And it even loads project files right off the SP-16 – so you can make projects at home, then tote them to the club on USB stick. But there a couple of additions:

But… wait, would you actually want a sampler shaped like a CDJ? 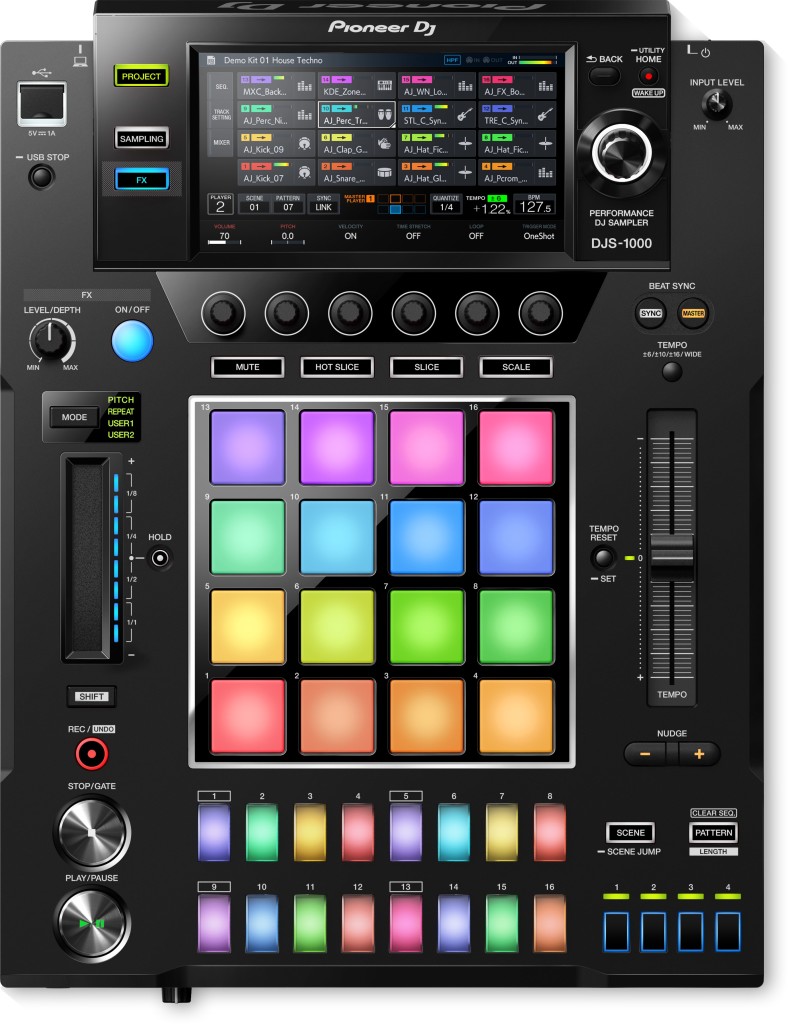 There are a few benefits to borrowing the CDJ’s form factor. Of course, you elevate the controls to the same height as turntables and other CDJs, and tilt up the screen. (Those viewing angles were pretty good, but this is still easier to see in a booth. Oh, yeah – Pioneer’s slogan for this thing is even “elevate the standard,” which you can take two ways!)

That to me actually isn’t the most interesting feature, though. Adding a big tempo control means you can actually ignore that sync selling point and manually nudge drum patterns in tempo with other music. Now, that’s not to say that’s something people will do, but I’d love to see more manual controls for feel and tempo on machines. (Imagine tactile control over the components of a rhythm pattern, for instance. We’ve mostly envisioned a world in which our rhythmic machines are locked to one groove and left there; it doesn’t have to be that way.)

Giving DJs a familiar control layout (well, bits of it, anyway), is also a plus in certain markets.

But all of this is aimed at much at the club as it is the DJ. Looking at this thing, it’s apparent what Pioneer are hoping is that clubs begin to buy samplers alongside decks. That enclosure, apart from saving some costs for Pioneer through standardization, is a big advert that screams “you bought CDJs, now buy this.”

That leap isn’t inevitable, though. The form factor that makes the DJS-1000 smart for a club doesn’t necessarily make sense in the studio. I might buy a square SP-16 for less money, but … not a DJS-1000, because it’s now ungainly and big and completely absurd to travel with. A lot of DJs would buy a CDJ for their studio to practice on – but Pioneer doesn’t really make one that fits those DJs budgets. (Ironically, the DJs who could afford buying their own CDJs – the ones gigging all the time – have enough hours on the CDJ that I don’t know even one who has bought decks for themselves. I think they’re glad to have a vacation from the damned things.)

The fundamental question remains: will DJs actually start playing live or hybrid sets? The gamble Pioneer is making is “build it and they will come,” effectively.

I’ve tried to find out if the Toraiz range are having that impact. Certainly, some DJs are buying them. A lot of producers, are, too – particularly the lovely AS-1 synth, which holds its own with competing synths so well that you can easily forget the Pioneer logo is even there.

But there’s still a big, big divide between live acts and DJs. Most producers playing live will want to arrange their own gear. And once you’re playing live, even if you decide to play a hybrid set, you’re more likely to want to augment the live set with CDJs than to switch to Pioneer for samplers. You wouldn’t buy a DJS-1000, probably, given the whole Elektron range is as affordable or cheaper – the Digitakt is half the price of this, does more, and is more portable.

But if Pioneer isn’t selling to you, but to clubs, then you can figure the strategy is this:

2. Get DJs preparing sampled sets on computers, then bringing them on USB sticks. That’s huge.

3. Get some DJs who haven’t worked much with samplers to toy around with the ones they find appearing in booths – the gateway drug effect.

#3 is more unpredictable; #1 and #2 aren’t. And don’t underestimate the power of Pioneer’s massive sales and marketing operation, which does extensive outreach to clubs and artists. That “industry standard” thing didn’t just happen accidentally.

Pioneer hopes clubs will invest in something like this press photo, of course.

I don’t think this means Pioneer will become an industry standard in live gear. But it does help them to expand beyond just decks, and ironically could help vendors like Elektron who are more live focused.

The real question isn’t for Pioneer, then: it’s for Native Instruments and Ableton. Home and studio use still seem to benefit from computer-software combinations. But the competition in live use is increasingly standalone hardware. We’ll see if the two Berlin software giants’ bet that people will still want to work with computers was a smart one — or if it means missed opportunities for Maschine and Live/Push. (TRAKTOR, for its part, has clearly lost ground. I’d love to see a TRAKTOR 3 that worked as portable standalone hardware, a deck combo you could take anywhere, but I’m not so optimistic.)

But I fully expect some of these DJS-1000s to start showing up in the nicer booths around.

Ableton and Native Instruments should worry about the DJS-1000