Universal Audio just brought their DSP platform – and top-notch audio interface tech – to a box that’s Thunderbolt, bus-powered, and under US$500. 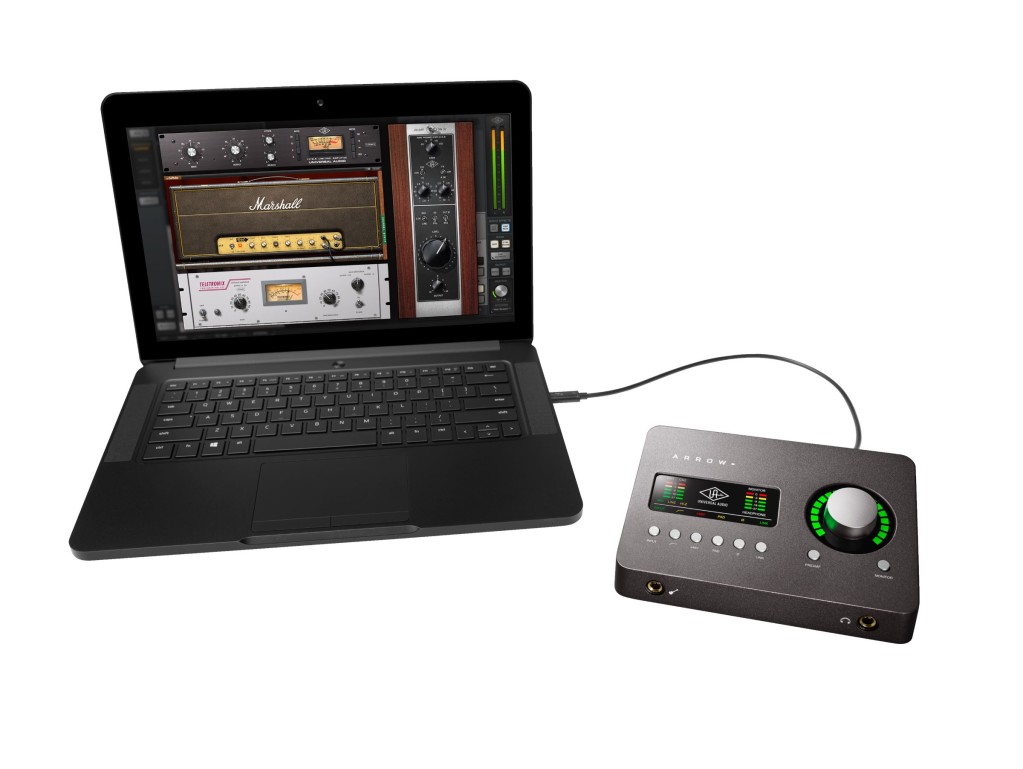 Here’s the thing: if someone asks you the age-old question “which audio interface should I buy,” it’s actually pretty hard not to mention Universal Audio. While the company may have gotten started selling pricey high-end DSP cards for their platform of vintage gear emulations and sound tools, starting with Apollo, they also happened to make one of the best audio interfaces. The Apollo line boasts high-end converters and audio circuitry and rock-solid performance. And it’s been steadily reaching more and more people, with the smaller Twin bringing the price down, and Windows support following Mac.

The Apollo Twin is good enough, in fact, that you can almost recommend it just for its audio interface capabilities – not only as a gateway into the catalog of UAD studio effects and sound processors and the like.

But the Apollo Twin still represents some outlay of cash. And it’s portable, but not quite throw-it-in-a-laptop portable – especially once you figure in that power brick.

So, the Arrow starts to look really smart as an entry level device. Its estimated street is just US$499. It’s still 2×4 like the Apollo Twin – so you can have a separate monitor mix. And there are two mic preamps. 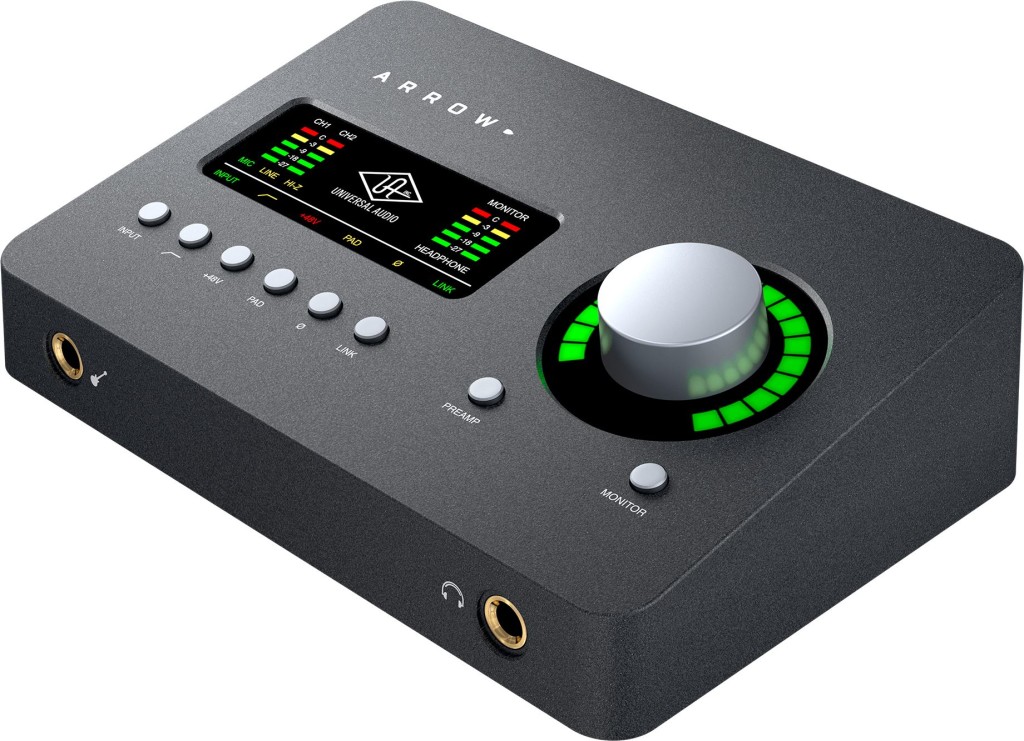 But it’s sleeker, prettier, more portable, and it runs on bus powered Thunderbolt 3 on both Mac and Windows. (Gone are the days of interface companies catering just to Apple – the press kit even came with shots both of a MacBook Pro and a Razer Blade, my respective favorite high-end Mac and Windows choices.)

Now, if you were just spending $500 on an interface alone, this might still not make sense. So then you have the value-add of the UAD DSP platform. While native processing is powerful these days – running VST and AU plug-ins and the like – it still means contending with some latency. So, you have to listen to the dry signal of your instrument or voice while you’re recording, and then add compressors and reverb and pitch correction and whatever else afterwards.

UA’s ongoing argument is that they can deliver their signal processors with near-zero latency, thanks to their onboard DSP (the “UAD SOLO” is what they call it). The mic preamps feature Unison technology, which models gain structure on the hardware for more accurate emulation of studio tools. And you can take your vocals and guitars and synths and keyboards and everything else and add their library of effects as if you’ve got the actual gear there, without hearing a delay as you track.

Those plug-ins don’t all come cheap, once you buy a lot of them. But the Arrow has newcomers to UAD in mind, bundling a full 14 full-featured “Realtime Analog Classics” in the box. 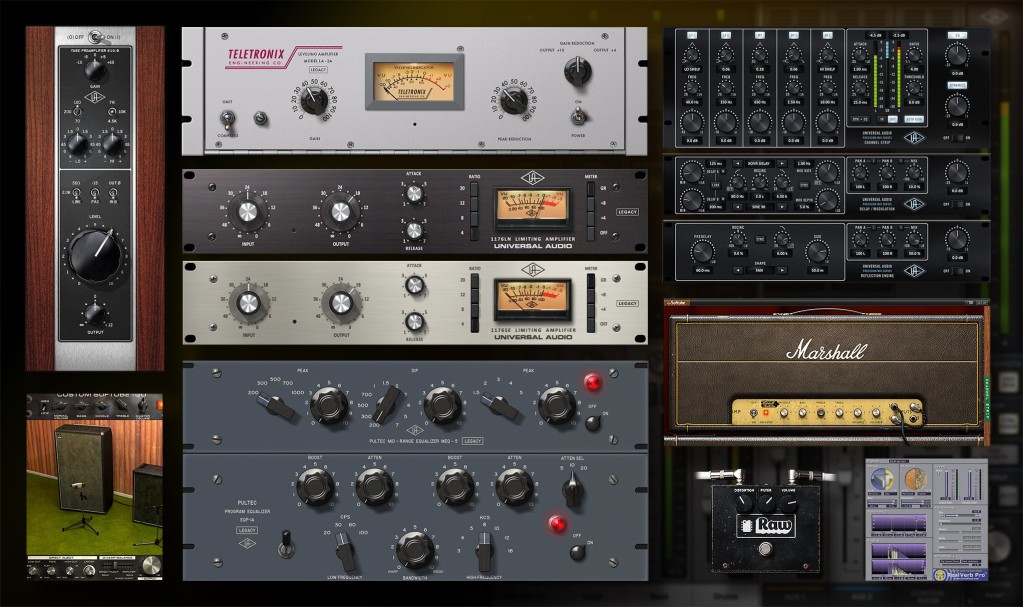 The bundle’s not too shabby, either. You don’t get the latest models of everything, but you do get the full UA 610-B channel strip for taking advantage of that Unison technology, ideal for recording. And there’s a nice selection of EQ, compression, and the like (from the still very decent previous generation), plus excellent Marshall Plexi and Softube Bass Amp room additions (great on instruments). You’ll want to budget more if you’re really in this for the UA stuff, but it’s not a bad start. UA of course hopes this gets you hooked so you buy more, so – here’s their explanation of their various hardware/software bundles:
UAD-2 / Apollo Plug-In Bundles Explained [scroll down]

Really, the only catch is that the Arrow has just one UAD SOLO processor. That means you can’t layer on a whole lot of those UAD effects at once – you’re limited by available processing power. I like the form factor of the Arrow enough that I hope UA will offer a DUO version with two DSP cores – my experience has been that on the Apollo Duo that’s more than enough horsepower for solo musician/producer needs. The single core, though, I suspect will feel a bit cramped for UAD addicts. (Those Legacy models in turn will be lighter on the SOLO, so there’s a certain wisdom to their inclusion.) Oh, and one other niggle – that extra x2 out is only on the stereo headphone jack, though – it’s missing the Twin’s separate rear channel jacks, useful for spatialization or other external outputs.

As a live device, though, and as an entry point to UAD, this one looks like a winner. UA keep iterating on their accessibility, and this one is sure to be a big breakthrough. That real-time functionality and library of plug-ins also makes it more fun to buy than competing audio interfaces, which only act as, you know, audio interfaces.

Arrow is shipping now. I’ll try to get one in to review. 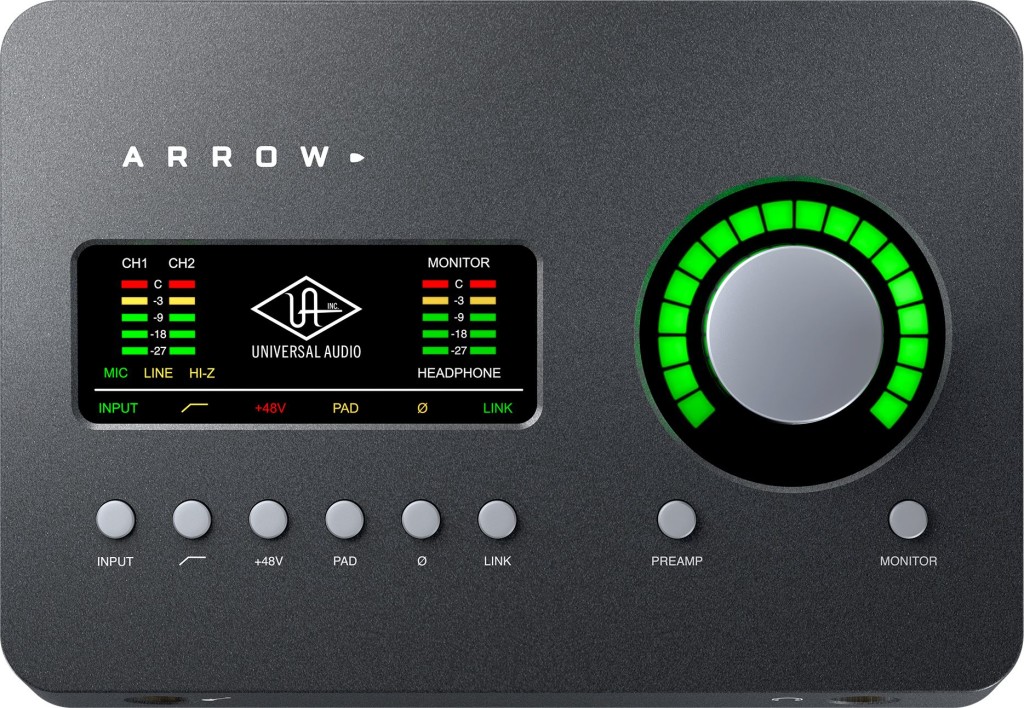 and about those plug-ins:
uaudio.com/uad-plug-ins.html

Arturia’s MiniBrute gets a sequel, and now it’s mini modular

Arturia’s MiniBrute 2S with step sequencer, not keys, might be your pick

Hardware
Go listen to this podcast about HBO’s epic sounds – and stick around for some retro visuals, too
MacWindows
SunVox 2.0: the nearly-free modular pocket DAW just got a slew of new features
Hardware
Type in lyrics, and this keyboard sings them, as Casio returns to its Casiotone roots
MacPlug-insWindows
IK’s model of the Neve 1081 console is free this month, plus free EQ and metering