Mammut is free software that does completely insane things to sounds

From the darkest arts in auditory alchemy, you can find gems like Mammut, a free tool that will utterly mangle digital audio into forms beautiful and chaotic.

And I mean really weird. From producing eerie, smeared convolutions of files to manipulating the spectrum of a sound in ways that are actually unlistenable (as in, they cause excruciating pain), Mammut is delightfully un-commercial and totally unpredictable.

Here’s how this all started. Last week, I noticed that popular time stretching algorithm PaulStretch had found its way into a convenient plug-in form for Mac and Windows. That opened the floodgates to lots of discussion of where to find similar tools.

If you want PaulStretch, it’s worth checking out the original, or the version now baked into free sound editor Audacity:

More tools also came up with Soundhack. As creator Tom Erbe wrote me (after I mentioned I loved his software for doing convolution all the way back to the mid 90s), he mentioned:

“++spiralstretch does a pvoc stretch on realtime incoming sound with up to 8 overlapping “stretchers”. also does granular stretching for a less spectral sound. (shameless plug)”

Mammut represents a different path to strange noises. You know you’re in for something out of the ordinary from the moment you launch it, and are treated to a woodcut of a woolly mammoth and some braying animal noises and … wind … or something. Then, with that dizzying animation looping in the background, you load a sound. You’re then able to directly manipulate the spectrum of the sound, via a seemingly random assortment of tabs with different functions. These have descriptions that range from detailed and useful to glib to … tabs that have no explanation at all, or one that says “Rather useless.” 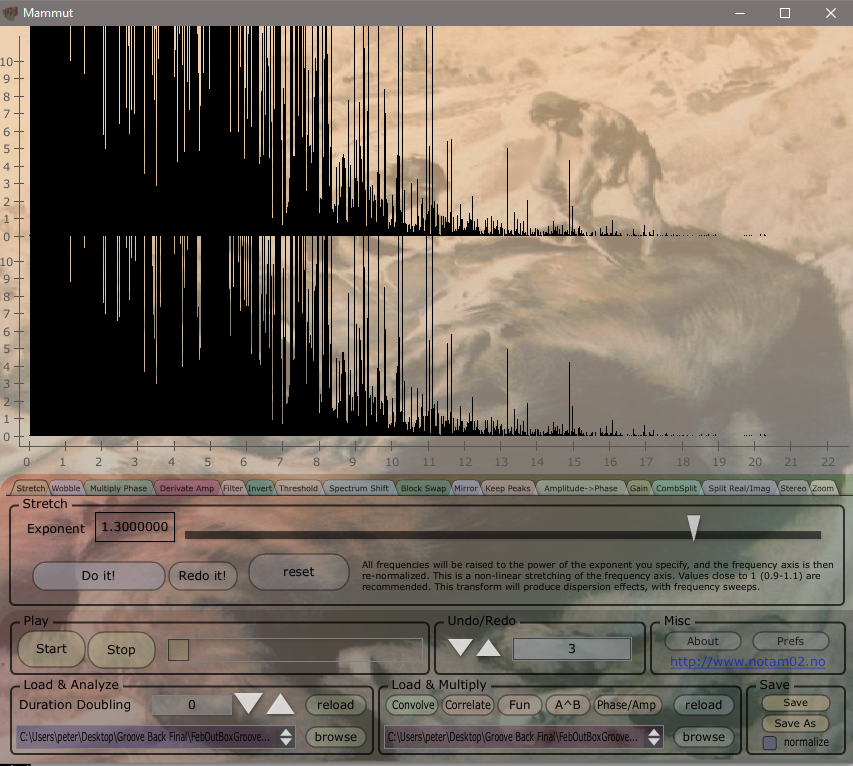 There’s some beautiful stuff in there. In addition to being able to edit a spectrum directly, you can apply more beautiful time stretching and features like convolution, which combines audio waveforms by spectra.

And there’s undo/redo, too, accessed by up and down arrows in the middle of the interface, so you can back out of decisions that just screwed up the sound. (Those you’ll find pretty readily!)

As the creators describe it:

Mammut is a rather unpredictable program, and the user must get used to letting go of control over the time axis. The sounding results are often surprising and exciting. Mammut is also ideal for common operations such as filtering, spectrum shift and convolution and it provides an optimal performance.

Mammut is old software, from pre-2007, but thanks to being built in the free JUCE environment still compiles and runs nicely. It’s a project of Notam, the electronic art research center in Oslo, and developed by Øyvind Hammer, with a UI by Kjetil Matheussen.

The “mammoth” reference is because it takes the FFT of the whole sound file at once instead of using windows / chunks of the sound. While the results here are radical, similar techniques find more practical applications – like building a smooth waveform pad synth.

Anyway, I suspect you can from here go down either a link hole looking at that research and the engineering side, or get lost playing with sounds.

I wound up making sounds with it, including convolutions of other productions I was working on, and assembled a track:

In honor of Mammut, I think it’s also only appropriate to paste in this film – enjoy!

Thanks to Jhh Löwengard for the tip!