Roland quietly made their DJ controllers into live-hybrid machines

Roland’s 1.10 DJ controller update adds a bunch of features – and plays to the machines’ strengths, drawn from the TR drum machine line, as live machines.

The DJ-202/505/808 line may look like bog-standard Serato controllers with Roland logos on. But they promise to be something else: DJ controllers made for people who also produce.

We already know that the “DJ” market involves a lot of producers dabbling in DJing and a lot of DJs dabbling in production. And anyone doing one or the other invariably finds they want to play a little, or do a remix, or finish a podcast, or practice mixing, or any of a number of things that might be served by DJ hardware.

So then the question is, what do you get? Two CDJs and a dedicated DJ mixer are expensive. Two turntables work, too, but that can be overkill if you want to play around with some digital files. So, then you’re back to a number of inexpensive DJ controllers, but they tend not to be much fun to play with, and they don’t have much utility in production.

That’s where the Roland/Serato line gets really appealing. The platters have extremely high precision and low latency drivers – meaning they work really well for beat-matching (including if you’re a producer learning to do that), and even some scratching. The 505 and 808 work well with turntables, too, meaning you can use a pair of decks with Serato for digital vinyl if you want. And, crucially, the 505 and 808 still function as mixers with the computer turned off.

I’d love to see other DJ gear that meets the above, but because of those jog wheels, there isn’t much. 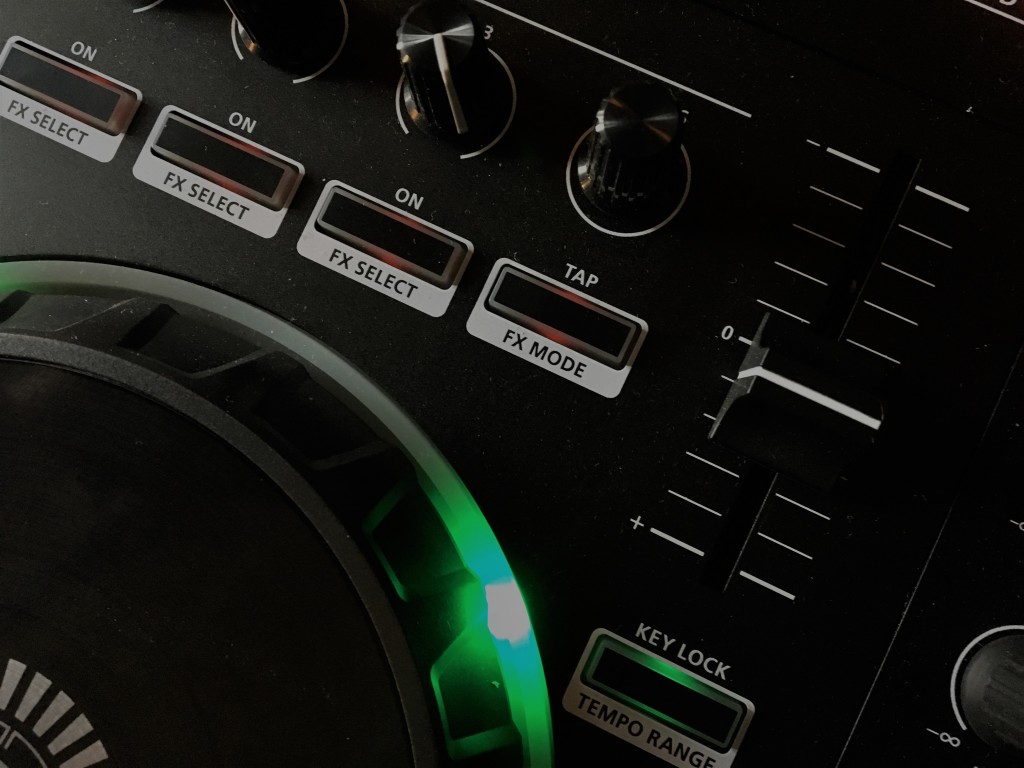 It could have ended there, but it appears Roland is investing into making the DJ line better at the task. What Roland is calling their “1.10” firmware update is actually pretty hefty, particularly for the more full-featured 505 and 808.

Remember, the 505 and 808 really are AIRA drum machines as well as controllers. And even with a TR-909 sitting on my desk, they’re rather useful ones. So without plugging in a single cable, you’ve got these drum machines ready to play at a gig. They even work with the computer unplugged in standalone mode, so you don’t have a paperweight when your PC is off (like when a Windows 10 update is installing… grrrrr).

These aren’t just samples, either – they feature the same component modeling approach you’ve heard in other Roland drum machines (and specifically the TR-8 AIRA), so they’re based on realistic digital models of the analog circuits. That’s why there are no “sound kits” to download or something like that.

Channel effects. [808] The DJ-808 also includes a new delay, phaser, a new noise effect, and bitcrusher. Since the DJ-808 also acts as a mixer/hub for gear, that’s… a lot of fun. The mic input also gets its own reverb, delay, and delay-reverb combo.

TR-S step loop. [505] Also cool – now you can loop through just some steps instead of the whole loop on the TR-S sequencer, so handy both for Serato sequences and the drum machine.

Tweak settings. [202, 505, 808] My only slight frustration with the DJ-202/505 is that the jog wheel/platters are so sensitive, at first I was bumping the top surface of the platter while using the effects. (I’ve… learned not to do that.) There’s now a sensitivity adjustment buried in settings, which if decreased, seemed to me to have a negligible impact on accuracy but made it slightly harder to bump. It’s a “release” setting, so impacts when you let go of that jog. Your mileage may vary. All three models now also have a Backspin Length setting, which lets the wheel jog through more of the track than a single rotation normally would. I found that turning up this length let me jog through more of the track quickly. 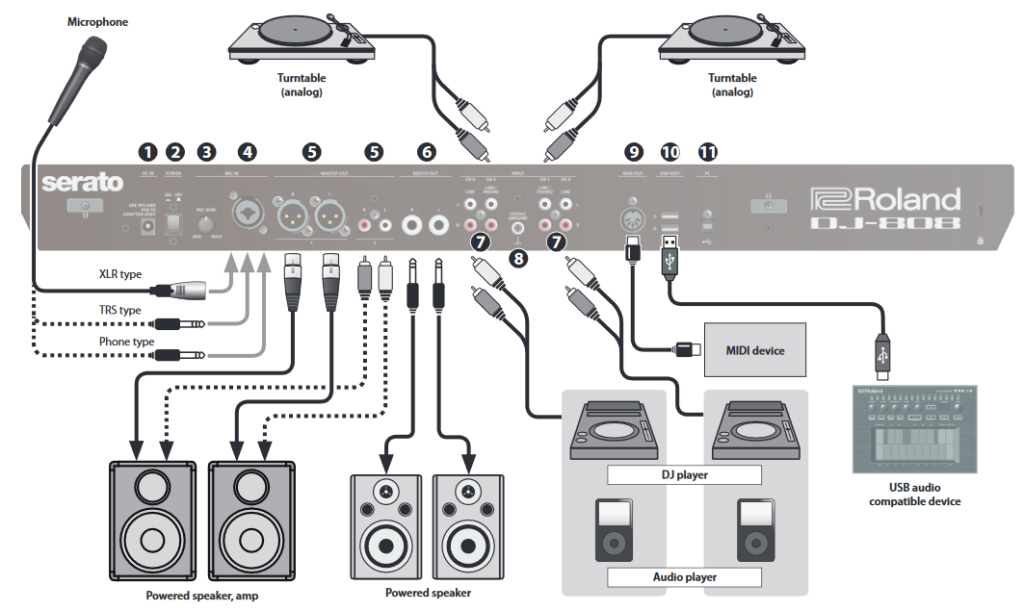 Look, if you’re going to splurge on DJ gear, most controllers leave you with big, unwieldy coffins that turn into paperweights when the computer is off and take up space when you want to remix or jam or produce.

One table, plus two CDJs and a mixer and … uh, sorry, you’re pretty much out of space, and you’ve only got two decks.

One table, plus DJ-808, laptop, and some toys. Now you’ve got four decks, the mixer, a drum machine, and all your toys, and you can still plug in a mic and go to town.

Plus, bonus: all these inputs record to the recorder in Serato DJ. So, you don’t have the old problem of remembering a portable recorder / cables / flash memory card / the level was set wrong / the inputs weren’t all there / etc. etc.

Of course, the same is true if we’re talking at home.

Now, if you’re cringing because this might be a musical trainwreck with some DJs, hey, I didn’t say the thing would practice for you. But for people who are good at improvising on all this stuff, it’s a godsend.

The only bad news: the DJ-505 is crippled, in that the switches on the front let you choose either the external input or your laptop, but not both. I get that Roland may want to differentiate products here, but since the 808 does so much already, I hope the next firmware update lets us use its inputs all at once the way the DJ-808 did. The 505 is a lot more affordable and more portable than the 808, and it still packs the essentials.

You hear that, Japan? There’s my 1.20 firmware wishlist.

Anyway, 1.10 downloads are available for all the hardware. And the TR-S is so much fun on the DJ-505 that I’m finishing now a separate guide to using it as a performance tool, plus guides to mapping the whole range to VJ applications. Stay tuned.

Ableton Shreds: This Live 10 video is … maybe more like your real life

DJ
Head by drone to a 3000-year old ruined village for a stunning performance by Hayk Karoyi
MacWindows
IK’s model of the Neve 1081 console is free this month, plus free EQ and metering
MacWindows
Dorico 4 is finally engraving-level notation with MIDI editing powers, in a single tool
Windows
NVIDIA’s Omniverse and Studio let you create 3D worlds together – and they’re free to use