We’re seeing the tail end of those filings now, as Dave Smith Instruments file to recover their six-figure legal costs from MUSIC GROUP, in effect for MUSIC GROUP having filed what the courts found to be a lawsuit without grounds.

Last week, CDM reported that Behringer’s global entity, MUSIC Tribe, had sent a cease and desist letter to Chinese news site Midifan, threatening a criminal defamation lawsuit would be the next step. However, as of this writing, no lawsuit has been served.

CDM was tipped off today that court filings are available showing MUSIC GROUP (in the USA) proceeded with legal action against Dave Smith Instruments and various defendants for libel per se, libel per quod, and product disparagement, in the state of California, seeking damages in excess of US$250,000. The filings are dated 9th of June 2017.

The twist here is that in addition to Dave Smith Instruments, the manufacturer, and employee Anthony Karavidas (an engineer at DSI), the lawsuit added as defendants an additional twenty individuals posting in the same forum thread. Since the identity of those individuals is unknown, they’re named as “DOES 1-20.” In the words of the lawsuit, “the true names and capacities, whether individual, corporate, associate or otherwise … are unknown to Plaintiff.”

Behringer also included reference to Dave Smith’s Prophet Rev2 as a competitor to the Behringer Deepmind 12 in the suit.

Court filings are available as public record of the San Francisco County Superior Court (that’s the state trial court of the county of San Francisco). Expect a large pile of legal findings from the two companies and their lawyers, but those are located here:

(All documents related to the proceeding are located under case CGC17559458.)

The lawsuit was directed exclusively at commentary published by a DSI employee and commenters on the Gearslutz forums.

But to review: Behringer attempted to turn a selection of comments by a single engineer and twenty unnamed individuals into a quarter-million dollar-plus defamation claim against a manufacturer, an individual, and pseudonymous forum posters. That thread is still up – it reached the 153-page count before a Gearslutz moderator closed the discussion, on the 4th of July of 2017. One sample:

(Whereas some threads were initiated by forum user Uli Behringer himself, this one came from a third party, before it ballooned.)

Dave Smith Instruments declined to comment for this story. 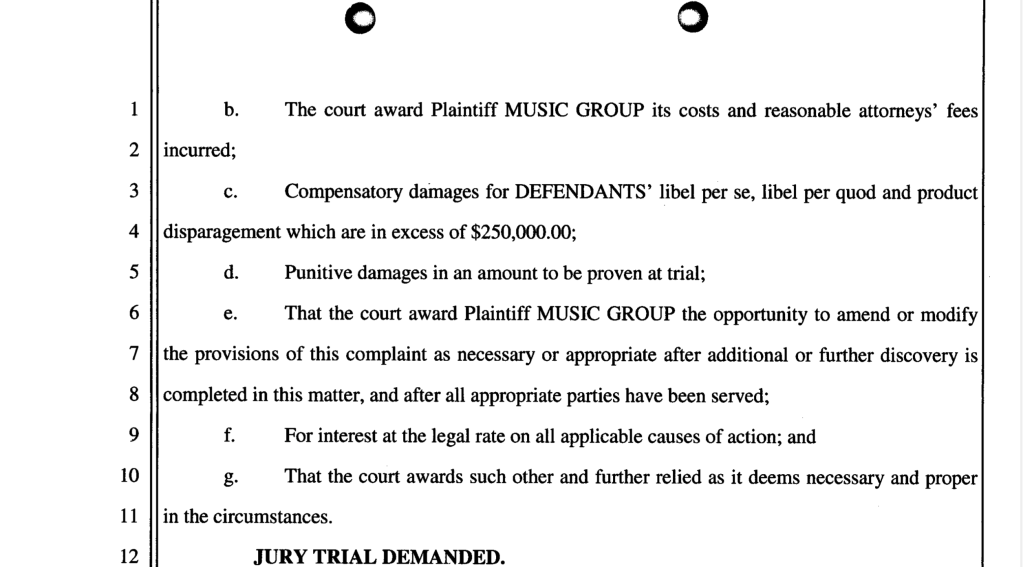 What the lawsuit says

According to evidence presented in the lawsuit, Tony, appearing as Tonykara, wrote a series of messages in a thread in early 2017 on Gearslutz forums, and later identified himself as an engineer working for DSI when a user asked him who he was. In the same thread, DOES 1-20 [users identified only by handle] chime in with other sentiments tilted against Behringer. (This thread itself was not entirely one-sided – even in the court evidence provided, you’ll read other form posters criticizing Dave Smith Instruments and Tonykara.)

These observations range from general complaints about Behringer products copying other products or characterizing business practices as “underhanded,” to specific allegations – particularly, a post by Karavidas that claims the Behringer CT100 cable tester is a “blatant copy” of a product by Ebtech.

Some of these complaints may indeed be factually questionable or genuinely inaccurate. Other claims, however, would be harder to disprove. For instance, the lawsuit highlights a comment by Paul Ditherl who says “it’s not a secret that Behringer has ripped off products in the past and is planning to do so in the future.” The lawsuit characterizes that as “false, defamatory, and libelous.”

It would be hard to prove or disprove what Behringer will do in the future (obviously), but note that past lawsuits by Roland and Mackie in fact claimed some past Behringer-branded products were deliberate copies. Whether or not those makers won those lawsuits, it means that they did product a significant amount of material evidence as a matter of public record.

There are three charges made in the lawsuit:

Libel per quod. Paraphrasing: claims about Behringer’s business practice and alleged history of copying other products are false and have hurt the company’s reputation. This category requires demonstrating specific legal damages in court.

Libel per se. This is a related set of claims, but because of US law forbidding attacking someone else’s business profession falsely, might not require damages. [Very big disclaimer: I’m not a lawyer. If I were a lawyer, I would probably advise you that you shouldn’t take this description as legal advice. But you can get this literally from what “per quod” and “per se” mean.]

Product disparagement. Here, because potential customers read these statements, and they refer to the Behringer brand and products, there’s a specific claim of damages to the brand and the products, beyond

If you can find your way through the court documents, you’ll find exhibits reproducing the complete forum thread, plus a cease and desist letter sent on the 7th of March 2017 – and an agreement by Tony Karavidas to comply with the letter.

Incidentally, if you’re interested in those other, pseudonymous posters to Gearslutz, they remain unnamed. The lawsuit says these “Does” 1-20 will be amended to the lawsuit once their identities are known. That may mean attempting to obligate the forum to reveal those identities. (Historical footnote: when Apple attempted to unmask sources and authors of stories on its leaked “Asteroid” audio interface over a decade ago, courts ruled it couldn’t, in a case called Apple versus Does. This is a different set of circumstances, but it gives some clue to how courts handle unidentified users in legal cases.)

Behringer had not yet responded to CDM’s request for comment as I published this.

How the suit failed

If reading the description of the Behringer decision sounds chilling – as in, anyone could raise this kind of suit and silence dissent – then you may appreciate understanding what anti-SLAPP rules do.

Here’s a blog post explaining:
Why, Yes, I AM Into SLAPPing

Anti-SLAPP, or rules against Strategic Lawsuit Against Public Participation, are designed to protect against frivolous tort lawsuits, are specifically designed to make sure that only serious defamation cases get to court.

The complaint filed by Dave Smith on October 19 of last year argued:

1. The statements were posted on a forum – that is, a public forum.
2. They’re in the public interest – you should be free to discuss products’ design and quality, and the business behind them, which Behringer themselves made public.
3. Since Karavadis was not himself in the business of selling instruments – just working for DSI – he didn’t fall under an exception to the above.
4. These were subjective statements.

Point four is the kicker – we’re free to have opinions about instruments, about music, about any matter of public discussion. And that combined with a public forum is the essence of free speech. Lawyers for the defendants also argued these statements about MUSIC GROUP didn’t constitute malice.

The case is proceeding, but because the defendants prevailed in the anti-SLAPP motion, it’s now down to damages awarded to Dave Smith Instruments, not the other way around. (DSI are demanding $119,250 in legal fees.)

And that’s the way the system should work. I would hope we continue to have opinions – even strongly-worded ones – about music and music technology. (I know some people have expressed a few of those about me and this site.)

We are bound to be accurate about the facts of products from makers like Behringer and the history of how they were made – and free to be impassioned about opinions.

I’m still digging through a very slow-loading site via a VPN (since I’m blocked from the US site here in Germany), but I welcome additions or corrections. If you’re a lawyer, in particular, please feel free to correct me and I’ll amend this story as I know more.

Late last week, I shared news that Chinese news portal Midifan had received a cease and desist letter from Behringer, via Music Tribe.