Summer festivals? No, the most epic onstage moment for this summer has to be Kraftwerk jamming live with the International Space Station – and an iPad as the first electronic musical instrument in space.

Take a look (German-language text with English-language subtitles) – and spot the riff from Close Encounters:

In front of a crowd gathered in Stuttgart, Gerst announces from the international space outpost:

I am one of only six people in space, on the outpost of humanity, the International Space Station ISS, 400 kilometers above sea level. The ISS is a Man Machine – the most complex and valuable machine humankind has ever built.

Here in the European Columbus laboratory, the successor to the Spacelab, the European Space Agency ESA is researching things that will improve daily life on Earth. More than 100 different nations work together peacefully here and achieve things that a single nation could never achieve. We are developing technologies on board the ISS to grow beyond our current horizons and prepare to take further steps into space, to the Moon and Mars.

The project was the brainchild of ESA and Kraftwerk’s Henning Schmitz, part of a personal relationship between the band and the agency, with Kraftwerk providing a whole lot of the technical support to make it happen.

I spoke with the European Space Agency to find out more about what took place.

The software on the iPad was custom-configured for Dr. Gerst by Henning Schmitz, especially for this event, and then sent to orbit.

The iPad itself made its way to ISS on the SpaceX-launched supply mission CRS-15 at the end of June. (Russian Progress vehicles launched on Soyuz also supply the ISS; the USA uses Dragon atop Falcon 9 at the moment.)

The app is Lemur, the landmark touch control app, with another soft synth behind it making the sound. (ESA are not making public the identity of the other app.) Kraftwerk have been spotted using Lemur since the original hardware version; here, the advantage is a simplified performance interface. (Too many iPad soft synths get a bit fiddly; you can see how nicely this works live by contrast.)

The ISS travels at nearly 28,000 km/hour, or one trip around the Earth every 92 minutes. You can track its orbit on ESA’s site. That means getting signal to and from the space station is a big challenge. A network of satellites handle audio and video from the space station, plus a simple audio feed back to the station, and it can only maintain a signal reliably for about 20 minutes before it has to be handed off to another satellite. Dropouts and problems are common.

The astronauts are “terrific actors,” in other words, ESA tells us. They are just getting a basic in-ear audio feed and no video, and manage to make it feel as though they’re just casually Skype calling you.

There’s 3-5 seconds latency on the AV signal, too. So to make the jam session live, Gerst led with the solo, and Kraftwerk followed along with the audio from the space station. (There’s then no latency for the audience, because the signal never makes a round trip.) Gerst himself basically was isolated – a landline telephone linked the feed from Stuttgart back to the NASA control center and audio control room in Houston and up to the station, giving him just some basic audio. ESA were at front of house with Kraftwerk’s audio technician, and it was still necessary to ride mixer faders to avoid a feedback loop.

But the result is a genuine improvisation. As such this represents two firsts: both the first electronic instrument in space, and the first live musical jam session between Earth and orbit. 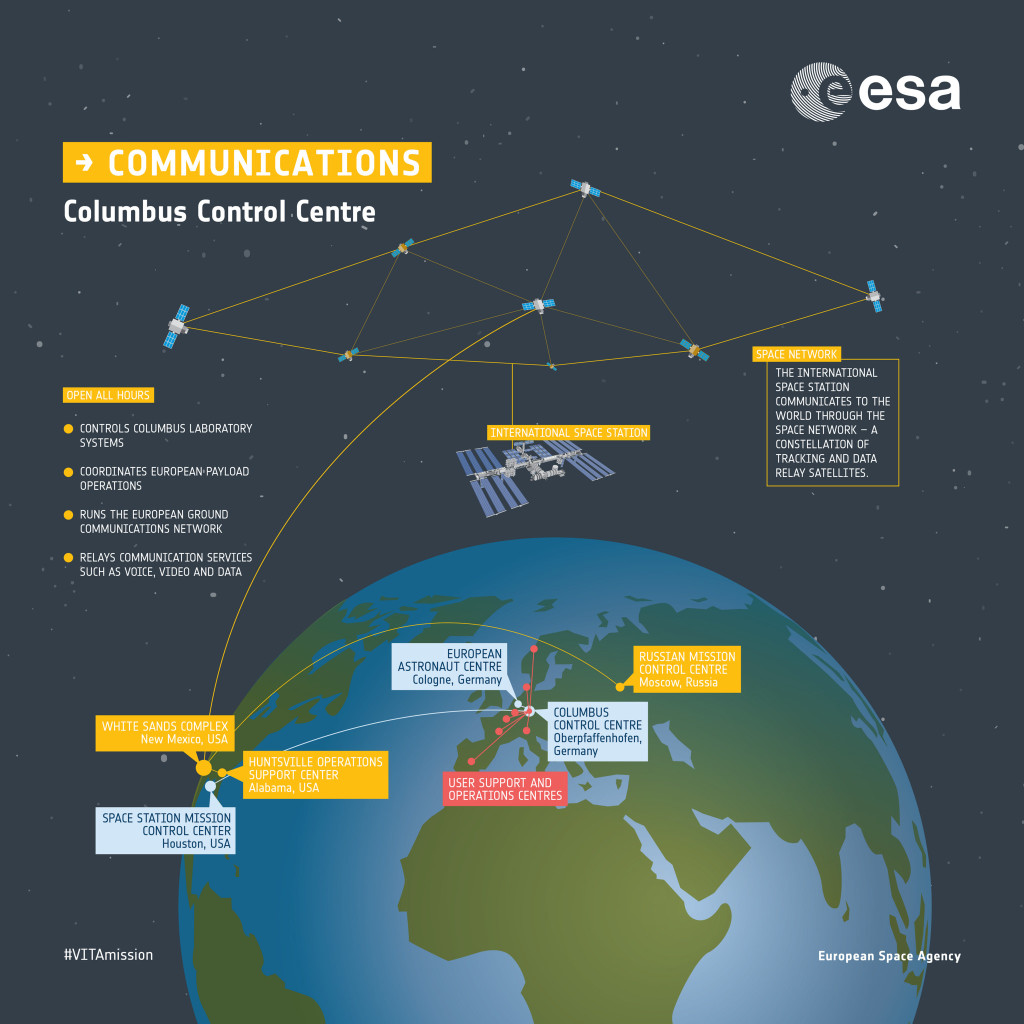 Here’s how the ISS stays in contact with Earth. It’s … more complicated than your typical Skype video call to your mom. Credit: ESA.

The people and venue:

The venue is the Jazz Open Festival, with a crowd of 7500 people in Stuttgart. (Hence the cheers as a UFO flies above the TV tower in the city.)

Dr. Alexander Gerst is a geophysicist as well as astronaut. This is his second mission to the ISS, and puts him in space from 6 June to the middle of December, 2018, and will be the commander of the space station during the second half of that stay, the mission called Expedition 57. That will make him only the second ESA astronaut to take command, after Frank de Winne on Expedition 21. (The latter I’ve had the pleasure to have dinner with, thanks to ESA. I asked him about sound, of course. His answer: the space station is almost deafeningly loud, not perhaps the soft purr you have in mind after watching Star Trek: The Next Generation – the Russian section being loudest of all, because of particular equipment it stores. They also use sound as one diagnostic for how equipment is working, though.)

Plus if you’ve seen The Martian, the character of Alex Vogel draws some elements from the real-life Dr. Gerst.

Kraftwerk of course had their own track “Spacelab” (1978). The name comes from a research laboratory developed in the 1970s as a joint project between NASA and European Space agency predecessor ESRO. ESA tells us that the environment Dr. Gerst is in now, ESA’s Columbus laboratory module, is a direct descendant of that project. It’s a massive 75 cubic meters (well, massive when you’re launching that into space), packed with research equipment handling space science, Earth observation and technology, materials science, and more.

And so what you get is a convergence of science and culture, all in the European sphere.

More on the ESA-hosted blog for the astronaut: