It was only a matter of time before some of the craziness of the modular world came to desktop synths, too. Arturia’s new MicroFreak is a budget keyboard with a weird streak.

It’s also been the source of some confusion, because it in fact makes use of oscillators from open source hardware maker Mutable Instruments, but hang tight for an explanation there. (It’s not exactly the focus of this synth, but it is significant – and an interesting illustration of overlapping capabilities in the age of open source.)

Experimental features are making their way into the mainstream. Let’s count – and yeah, that product name MicroFreak fits: 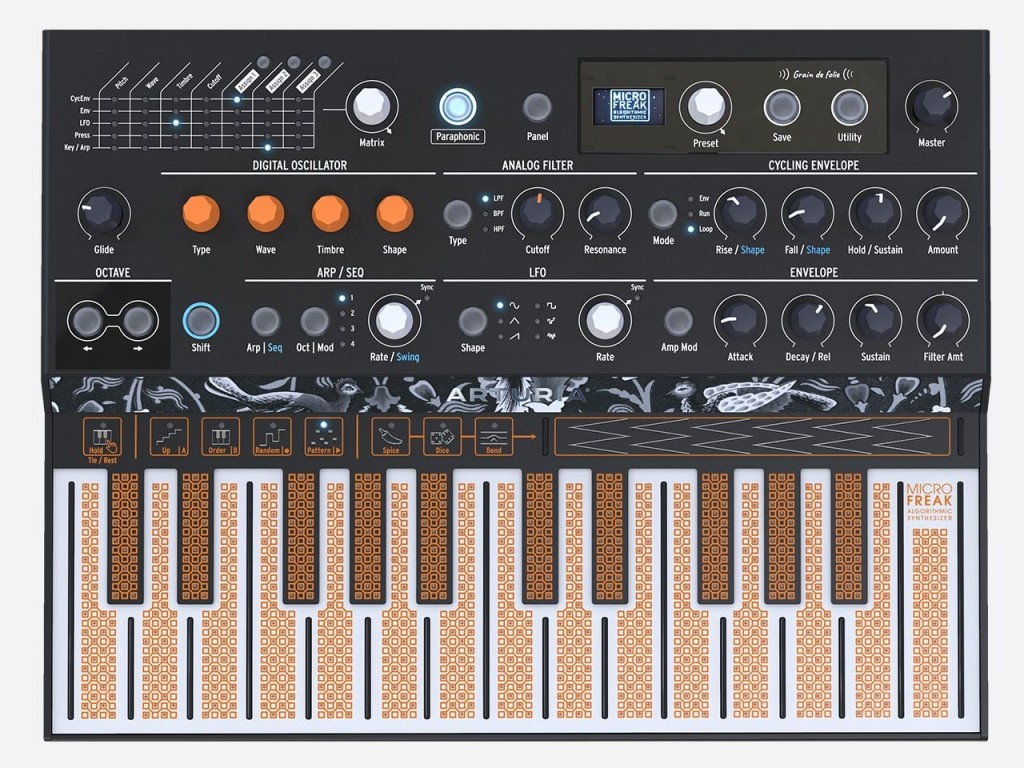 A flat-panel metal touch keyboard (Buchla style), with poly aftertouch. (No word yet on MPE support. Seeking some clarification there.)

A matrix for modulation (something associated with synths like the ARP 2500).

Randomization features in the step sequencer – various functions along the top “spice” and “dice” and otherwise rearrange your patterns.

It’s still an Arturia design, no doubt – the digital oscillators get fed through an analog filter (this time the Oberheim SEM), and the preset storage and control knobs all look Arturia-like and more conventional. But it’s a blend between that and more leftfield hardware, in one very low-cost unit – $349 (299 EUR) this spring.

The resulting design looks a little like it was pieced together from different bits – an ornate keyboard versus a more staid gray body, plus four glaring traffic cone orange knob caps. But that price is terrific, especially considering a lot of modular cases start at that price – let alone what you’d need to even begin to approach these possibilities here.

And – the thinness is fantastic. It seems 2019 is a year of touch keyboards. Don Buchla would’ve been proud of us. 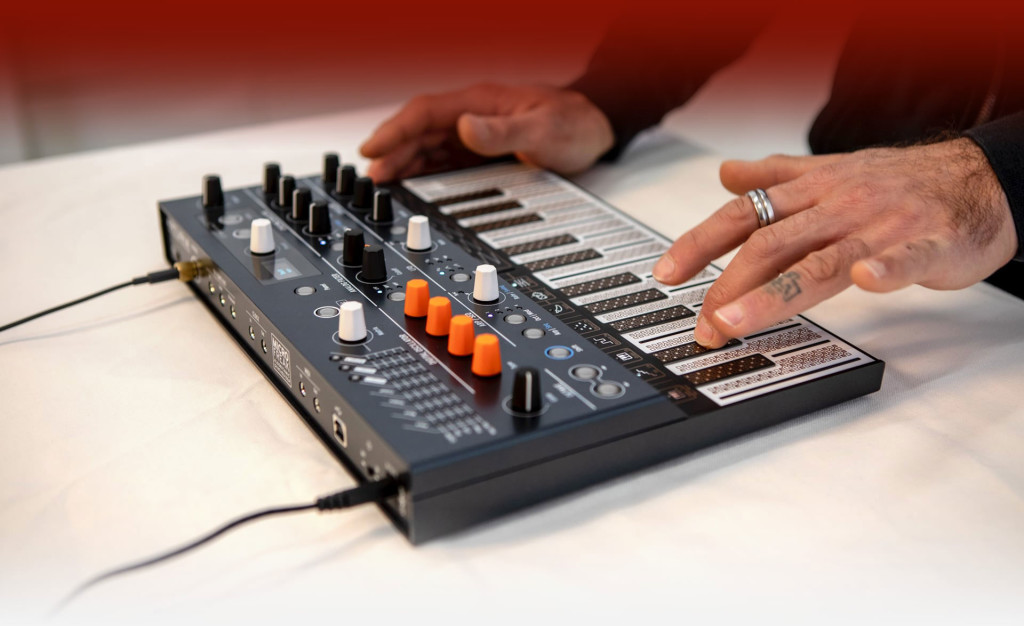 So let’s get back to the Mutable Instruments oscillators, which are one of the more interesting features here. We’ve confirmed that Mutable Instruments and founder/designer Emilie were not directly involved in the design, though she did sign off on the mention of the company name.

Mutable Instruments’ Plaits module code is available open source under an MIT license, so any manufacturer can pick it up and use it – even without asking, actually. That’s by design; Emilie tells us she intended widespread use. (An alternative for open source developers is to use “copyleft” licensing, which requires anyone reusing your stuff to release their source, as well. That would’ve been interesting – theoretically it would have meant Arturia would need to open source their additional oscillators and firmware. The GPLv3 license we’ve used on MeeBlip has this function, for example.)

Some of Arturia’s original copy was perhaps a bit overzealous and caused some confusion about whether Mutable Instruments was a partner on the design. They’ve since clarified that. For further clarification, read the statement on the Mutable forums:

So while it’s not a collaboration, it does show off the power of open source. As Émilie writes:

You can find Mutable Instruments’ DSP code in the Korg Prologue, the Axoloti, the Organelle, VCV Rack, and plenty of other bits of software or hardware. This is not stealing. Plaits’ code is a summary of everything I’ve learnt about making rich and balanced sound sources controlled by a few parameters, it’s for everyone to enjoy.

The important thing here is to differentiate between the open source Plaits modules, some new additions from Arturia, and then the Plaits sounds you get from Mutable’s updated modules. Let’s break it down:

Arturia’s coders have slightly modified these in some cases – for instance, new chords in the Chords mode.

Those of us who have been playing with this on hardware or in the authorized versions inside VCV Rack will definitely appreciate seeing these elsewhere. (Really – can’t get enough.)

Arturia did add some pretty significant modes to those:

To me, those Arturia additions really anchor this offering, with some pretty fundamental ideas on offer. Put them together, and you should have something really versatile.

But okay, since Mutable Instruments doesn’t get any of your money when you buy the Arturia MicroFreak, did Mutable just give away the store by using an open source license? Well, no, not really – Plaits gives you a full 16 modes, an internal low pass gate, and does all its 32-bit floating point math in hardware that you can bolt into a modular case and interconnect via control voltage. Plus, you can get Plaits in software if you like – see the Audible Instruments Preview for VCV Rack, regularly updated. 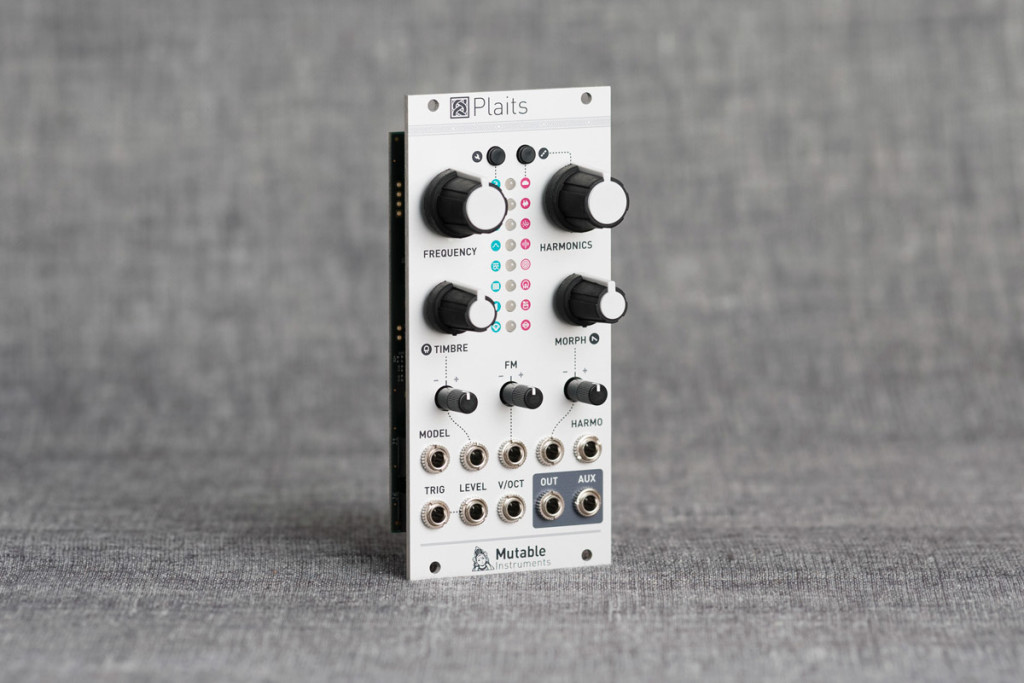 Heck, that could compel us Mutable superfans into happily buying these same features multiple times, in Arturia’s hardware, in the pack for VCV Rack (which Mutable has elected to support charity), and in Mutable’s own hardware. Hmmm… a MicroBrute, a little skiff with some Mutable modules, a nice connection to the laptop, maybe again a Raspberry Pi. Okay, I’ll stop. Guess I’ll have to buy the White Album again…)

And as for MicroFreak:

Moog’s Sirin is a limited Taurus-based synth that sings high, too

codeHardware
Read this story of how the original Xbox startup sound was created
Hardware
Apple gets the Pro back in MacBook Pro with more power – and ports and keys
code
NAP, a free, high-performance data-driven visual and audio platform, is now slicker than ever
Hardware
What’s new on Roland SP-404MKII sampler, spec for spec; 404 timeline and hands-on roundup