dadamachines doppler is a new platform for open music hardware

The new doppler board promises to meld the power of FPGA brains with microcontrollers and the accessibility of environments like Arduino. And the founder is so confident that could lead to new stuff, he’s making a “label” to help share your ideas.

doppler is a small, 39EUR development board packing both an ARM microcontroller and an FPGA. It could be the basis of music controllers, effects, synths – anything you can make run on those chips.

If this appeals to you, we’ve even got a CDM-exclusive giveaway for inventors with ideas. (Now, end users, this may all go over your head but … rest assured the upshot for you should be, down the road, more cool toys to play with. Tinkerers, developers, and people with a dangerous appetite for building things – read on.)

But first – why include an FPGA on a development board for music? 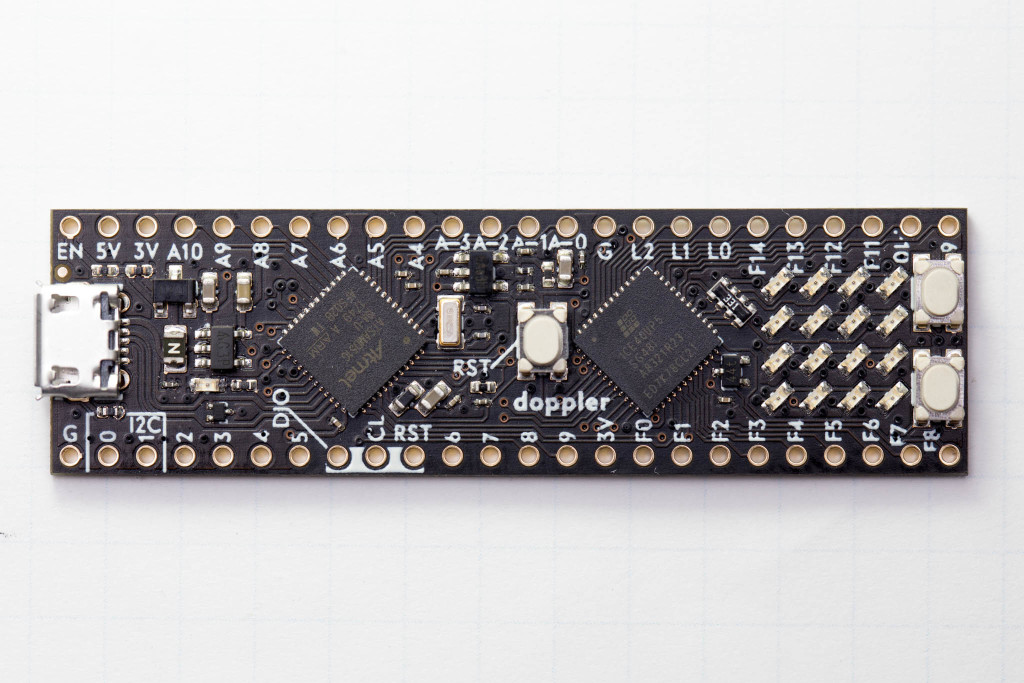 The pitch for FPGA

The FPGA is a powerful but rarified circuit. The idea is irresistible: imagine a circuit that could be anything you want to be, rewired as easily as software. That’s kind of what an FPGA is – it’s a big bundle of programmable logic blocks and memory blocks. You get all of that computational power at comparatively low cost, with the flexibility to adapt to a number of tasks. The upshot of this is, you get something that performs like dedicated, custom-designed hardware, but that can be configured on the fly – and with terrific real-time performance.

This works well for music and audio applications, because FPGAs do work in “close to the metal” high performance contexts. And we’ve even seen them used in some music gear. (Teenage Engineering was an early FPGA adopter; see also the recent announcement of the Waldorf Kyra.) The challenge has always been configuring this hardware for use, which could easily scare off even some hardware developers.

For more on why open FPGA development is cool, here’s a (nerdy) slide deck: https://fpga.dev/oshug.pdf

Now, all of what I’ve just said a little hard to envision. Wouldn’t it be great if instead of that abstract description, you could fire up the Arduino development environment, upload some cool audio code, and have it running on an FPGA? 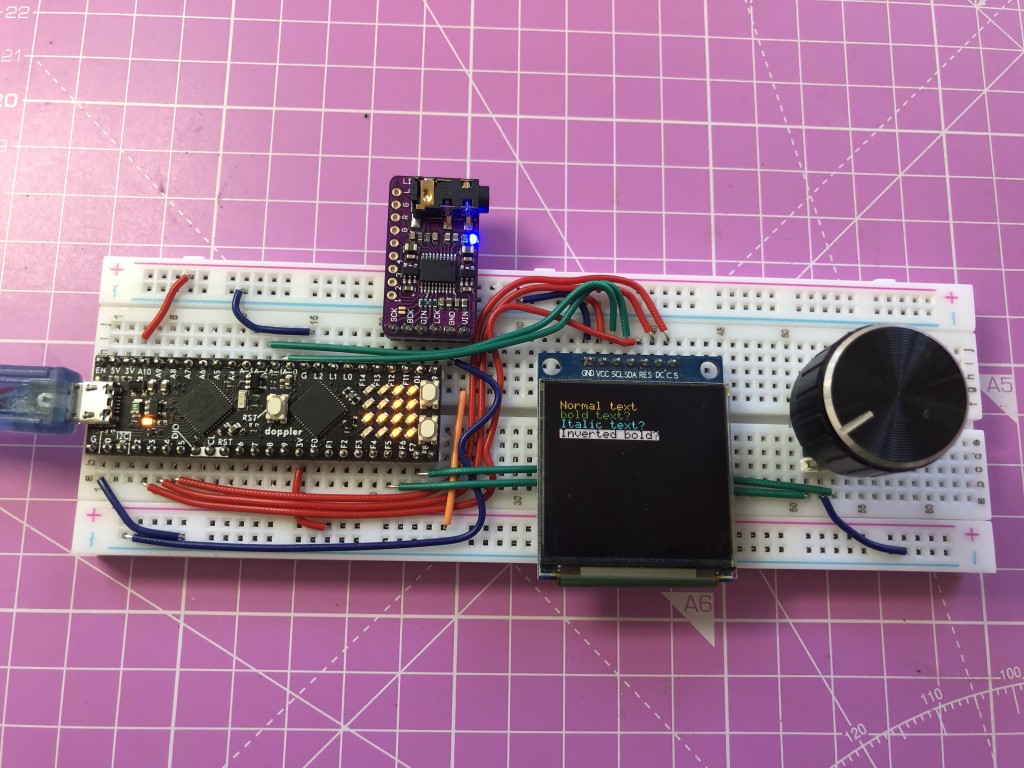 doppler, on a breadboard connected to other stuff so it starts to get more musically useful. Future modules could also make this easier.

doppler takes that FPGA power, and combines it with the ease of working with environments like Arduino. It’s a chewing gum-sized board with both a familiar ARM microcontroller and an FPGA. This board is bare-bones – you just get USB – but the development tools have been set up for you, and you can slap this on a breadboard and add your own additions (MIDI, audio I/O).

The project is led by Johannes Lohbihler, dadamachines founder, along with engineer and artist Sven Braun.

dadamachines also plan some other modules to make it easier to add other stuff us music folks might like. Want audio in and out? A mic preamp? MIDI connections? A display? Controls? Those could be breakout boards, and it seems Johannes and dadamachines are open to ideas for what you most want. (In the meantime, of course, you can lay out your own stuff, but these premade modules could save time when prototyping.)

Full specs of the tiny, core starter board:

I’ve focused on the FPGA powers here, because those are the new ones, but the micrcontroller side brings compatibility with existing libraries that allow you to combine some very useful features.

That frees up the FPGA to do audio only. Flip it around the other way, and you can use the microcontroller for audio, while the FPGA does … something else. The Teensy audio library will work on this chip, too – meaning a bunch of adafruit instructional content will be useful here:

doppler is fully open source hardware, with open firmware and code samples, so it’s designed to be easy to integrate into a finished product – even one you might sell commercially.

The software examples for now are mainly limited to configuring and using the board, so you’ll still need to bring your own code for doing something useful. But you can add the doppler as an Arduino library and access even the FPGA from inside the Arduino environment, which expands this to a far wider range of developers. 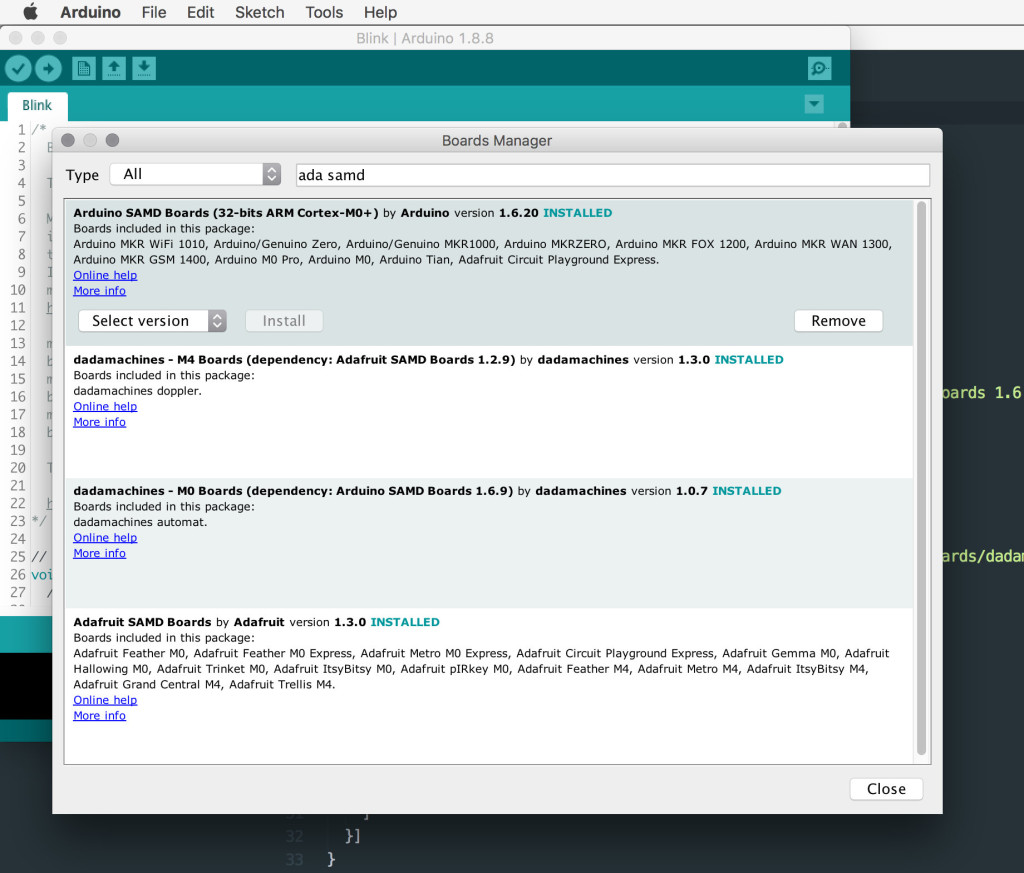 In a few steps, you can get up and running with the development environment, on any OS. You’ll be blinking lights and even using a 4×4 matrix of lights to show characters, just as easily as you would on an Arduino board – only you’re using an FPGA.

Getting to that stage is lunch break stuff if you’ve at least worked with Arduino before:

Dig into the firmware, and you can see, for instance, some I/O and a synth working. (This is in progress, it seems, but you get the idea.)

And lest you think this is going to be something esoteric for experienced embedded hardware developers, part of the reason it’s so accessible is that Johannes is working with Sven Braun. Sven is among other things the developer of iOS apps zmors synth and modular – so you get something that’s friendly to app developers. 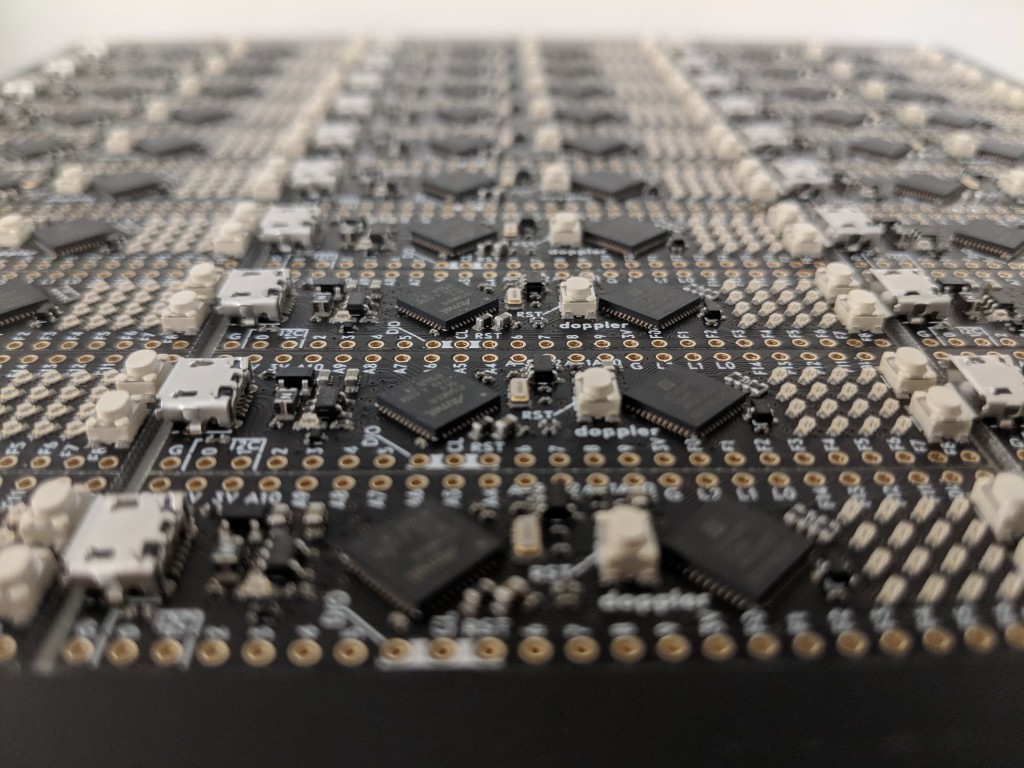 A label for hardware, platform for working together

Johannes tells us there’s more to this than just tossing an open source board out into the world – dadamachines is also inviting collaborations. They’ve made doppler a kind of calling card for working together, as well as a starting point for building new hardware ideas, and are suggesting Berlin-based dadamachines as a “label” – a platform to develop and release those ideas as products.

There are already some cool, familiar faces playing with these boards – think Meng Qi, Tom Whitwell of Music thing, and Ornament & Crime.

Johannes and his dadamachines have already a proven hardware track record, bringing a product from Kickstarter funding to manufacturing, with the automat. It’s an affordable device that makes it easy to connect physical, “robotic” outputs (like solenoids and motors). (New hardware, a software update and more are planned for that, too, by the way.) And of course, part of what you get in doing that kind of hardware is a lot of amassed experience.

We’ve seen fertile open platforms before – Arduino and Raspberry Pi have each created their own ecosystems of both hardware and education. But this suggests working even more closely – pooling space, time, manufacturing, distribution, and knowledge together.

This might be skipping a few steps – even relatively experienced developers may want to see what they can do with this dev board first. But it’s an interesting long-range goal that Johannes has in mind.

Want your own doppler; got ideas?

We have five doppler boards to give away to interested CDM readers.

Just tell dadamachines what you want to make, or connect, or use, and email that idea to:

dadamachines will pick five winners to get a free board sent to them. (Johannes says he wants to do this by lottery, but I’ve said if there are five really especially good ideas or submissions, he should… override the randomness.)

And stay tuned here, as I hope to bring you some more stuff with this soon.