Instagram-trending techno can’t find its way out of the corner of a warehouse with some manic depressive crows. (Oh no – Derelicte turned real!) So let’s go to an alien undersea imaginarium with Jonáš Gruska instead.

Slovakia’s Jonáš has become a hero of this site over the years, because he manages to do it all. He makes his own musical experiments. He plays live. He runs a label (LOM) that’s also a … sort of brand for sound nerds. And he engineers some really clever sound equipment, for catching delicate sounds and electromagnetic waves. 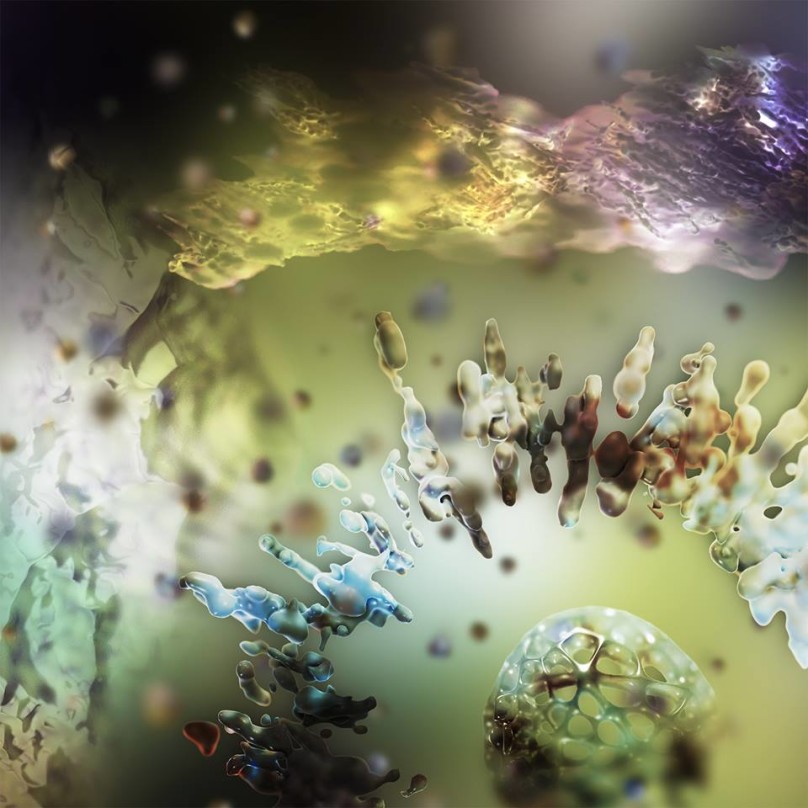 But it’s not just multitasking or lack of focus – these things fit together. The devices are part of Jonáš’ sound practice, and the label and workshops and even the act of selling those instruments helps create the scene around him. The music and images are about imagined ecology, but the larger label project is, as well. That’s in a nice context to the viral pandemic model of social media.

Maybe Jonáš is also demonstrating what’s possible in smaller hubs. Bratislava is now home to a LOM laboratory, in a city of just about a half million people – roughly the same as just Berlin’s Neukölln and Kreuzberg neighborhoods.

But anyway, that’s all our present reality, which is boring. Let’s go instead to the world of the video for Žaburina.

The visuals are the work of h5io6i54k – no, that’s not Facebook leaking my login password, it’s Brno-based audiovisual artist Lukáš Prokop. Together, they create a kind of fluid, aquatic organic-futuristic world, as eastern Europe meets Java.

the music is something I did algorithmically in supercollider with some spectral processing – many polyrhythms, polymetric melodies inspired by gamelan and south-asian music in general. the video was done by my friend h5io6i54k after we discussed the underwater worlds I was inspired by in the music… it is all his renders 🙂

SuperCollider is the free, open source code environment, which has also been the basis of a lot of the resurgent live coding movement. And yeah, it also means the potential to help free your mind from the usual grids suggested none-too-subtly by a lot of commercial software. But regardless of the tools, those rhythms zig and zag and swell like the titular swamp bugs and drifting algae.

The video premiere, and more commentary, are at excellent Czech-based blog Gin and Platonic (stories are in both English and Czech):

Plenty more gorgeous sounds where this came from, too – I think this is my favorite work by him yet.

There’s another terrific video, as well:

It’s actually one of the few times I would recommend reading through all the Bandcamp notes, as there’s tons of detail there, not just PR-speak… what begins as field recordings (hydrophone, insects) and oft-referenced musical material (Harry Partch, music from Cambodia, Malaysia, Indonesia) gets woven into some more futuristic world. (The name “comes from the Slovak word for part of a pond covered over with algae and frogspawn.”)

There’s more visuals and sounds to delight from h5io6i54k, as well:

In Czech and Slovakia, then, the netlabel is alive, and all of us can dial into a subaqueous staycation in our minds. And our friends are all aboard…

dadamachines doppler is a new platform for open music hardware

artists
These are the voices of resistance: interviews from Iran, female-nonbinary radio takeover
artists
Free sample mashing with samplebrain, by Aphex Twin and Dave Griffiths
3D
Train AI on images, and GET3D populates your world with 3D objects and characters
artistsinspiration
Cycling ’74 asked artists to make a collaborative Max drum kit – and shared the patches