You know the Minimoog and the modular. But do you know The Operator – a business telephone? Or the Moog table hockey game? The Moog name wound up in some strange places in the 80s.

These creations have little to do with Bob Moog. The company first known as R.A. Moog underwent buyouts by other manufacturers, before Bob Moog left the company bearing his name in 1977. Then around 1981, Moog turned to contract manufacturing – at aroundthe same time as the last Minimoog came off the assembly line. Management bought out the company in 1983 and did even more contract work.

But some of the weird side tracks that happened next are nothing if not intriguing. And synth manufacturers diversifying isn’t actually that strange a concept. We have to remember that part of what allows our industry to make weird devices like boutique modules is that we can source components and contract manufacturing from companies making other stuff. (Case in point – I spent Friday morning at ALFA in Riga, who partner with Erica Synths, Gamechanger Audio, and others. Even ALFA gets the lion’s share of revenue from other stuff – in their case, it seemed to be electronic safe circuitry and supplying the Russian car industry. That’s to say nothing of factories in Shenzhen, China.)

So, sure, the most infamous contract synth was the SSK Concertmate for Tandy Corp (aka the brand name used by Radio Shack). But there’s more. As Moog Electronics in the mid-80s, the company made subway door openers and climate control systems. And then these:

The Operator (originally the Telesys 3) in 1983 was a business phone with some features I’d find handy today, even if they’re dated: 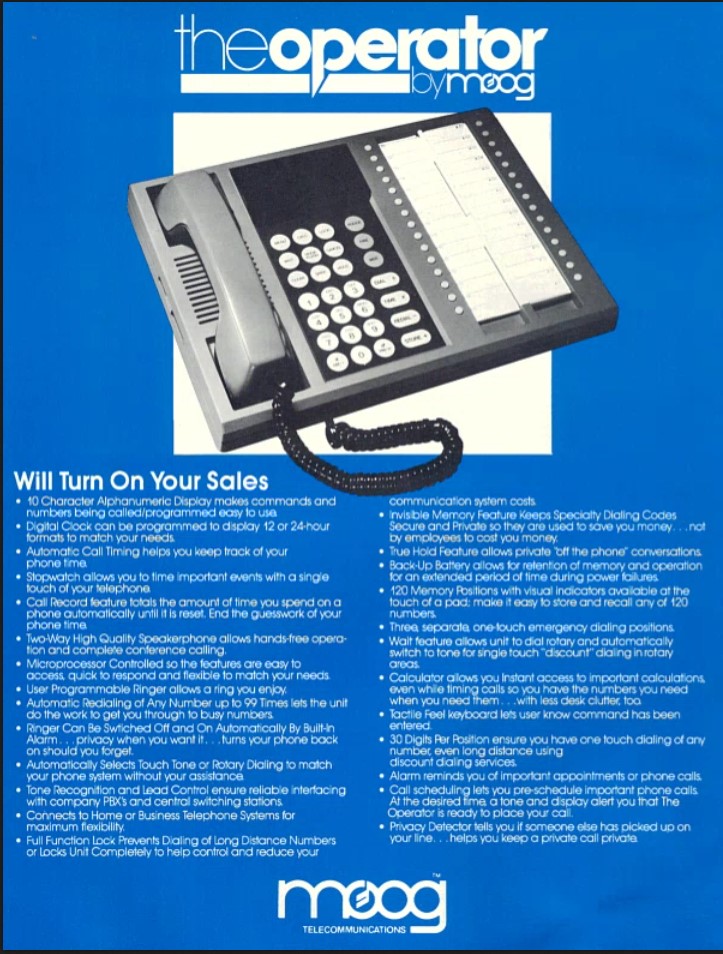 — plus this being the 80s, it also boasted all kinds of archaic compatibility features so it would work with touch, rotary, and pulse lines and corporate PBX and interfacing. Some things we definitely won’t miss.

Of course, the main synth connection here is, Moog Electronics accidentally predicted the FM synth that would one day come from Ableton. Ahem. But the “Moog Telecommunications” name tells you they aspired to make more devices, even if that never happened.

You’ll find this image and history on Moogarchives, which has the best timeline of the company’s story: 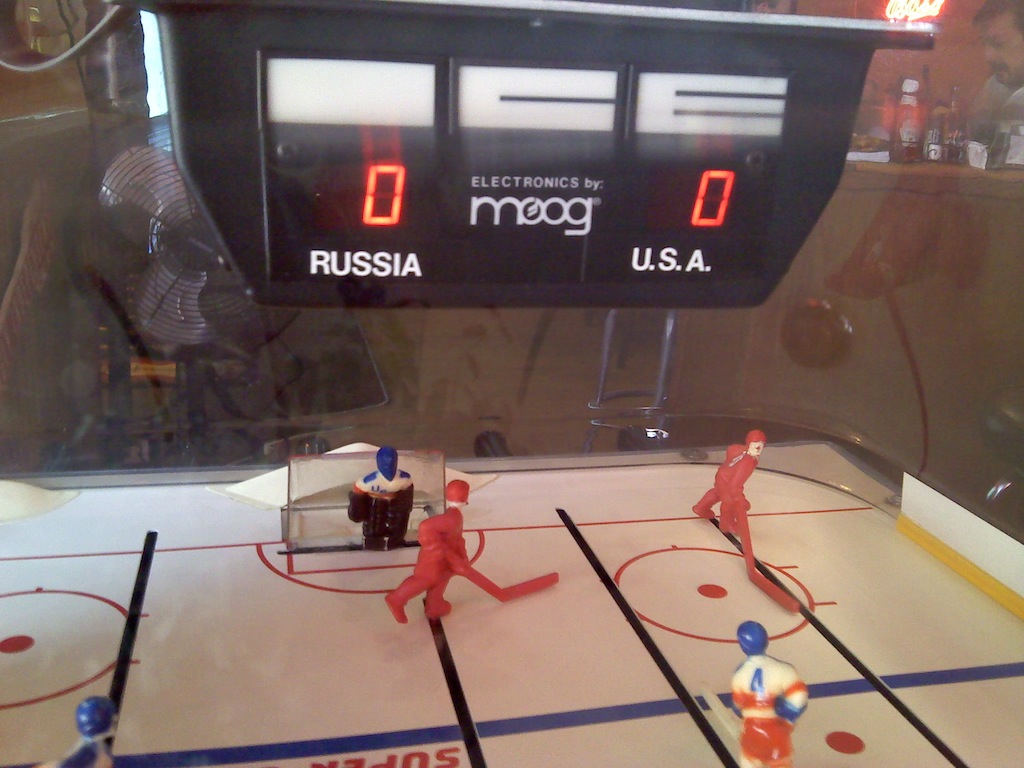 The Moog table hockey table surfaced in 2012 on a Gearslutz, captured by user plaidemu. If we look back to 2004, we find some trivia background on what this was – evidently also around 1983 or so.

Moog’s logo is on the scoreboard because they made the sound generation circuits. User vorlon42 (whoa, is that a Babylon 5 reference crossed with a Hitchhikers’ Guide reference?):

About 20 years ago, a Buffalo, NY-based company called Innovative Concepts in Entertainment rolled out a heavy-duty arcade-quality table hockey game called Chexx. Like the old “slot hockey” games many of us who grew up in the northern US and Canada had when we were kids, we could control each player (forwards, defensemen, and goaltender) by pushing and pulling a rod for each player, and turn the player by twisting the rod left and right. The playing arena was encased in a hard lucite dome, so that the puck wouldn’t fly out of the arena.

On top of the dome was an box scoreboard with three lights on each of its four sides, and sound-generation circuitry that would play crowd noises and organ “charge” riffs. The electronics for the game was manufactured by…..Moog Music. The Moog logo was featured prominently on the scoreboard.

The Chexx game, and successive versions, can be found in various game rooms, arcades, amusement parks, and sports bars around the world. The most recent version is called Super Chexx. (Unfortunately, it lacks the Moog music circuitry.)

You can still find the game manufacturer.

I love that the Russia-US matchup lets you recreate the miracle on ice. (Well, unless Russia wins, of course.)

A music system for the Commodore 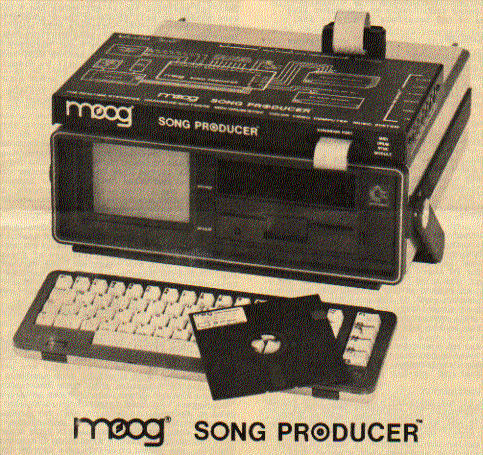 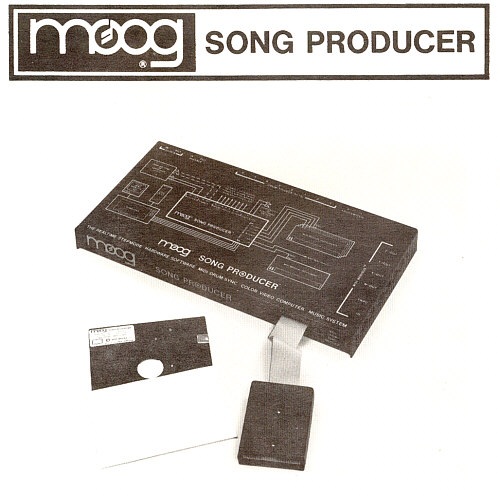 The Moog Song Producer was a very useful looking interface for the Commodore 64 – something you might want even now, if you’re a chip music fan. It’s a combination of software (for sequencing) and I/O for both MIDI and analog signal:

Friend of the site (and Retro Thing alum) Bohus Blahut wrote into Matrixsynth in the heady days of 2005 to add more detail:

These aren’t actually rare at all. I’ve seen them on Ebay dozens of times. I think that I got mine for $30 a few years back. I haven’t used it yet (know how that feels?), but it is an amazing package. The thing that would make it even more amazing is if Moog had ever come out with the device mentioned in the manual; an analog sound module. How hip would that be?

Long before the 2008 Paul Vo Moog Guitar, there was the Gibson-Moog collaboration RD series guitar. This even predates Moog Electronics, so Bob Moog himself designed the circuit – an active preamp intended to widen tonal range and make the sound compete with the synth. Or something. With bright, treble, and bass modes, plus compression and expansion, it was more complex than guitarists might have wanted at the time – but also more capable. You can read up on it at Reverb.com:

As for those electronics creations – well, it was acceptable in the 80s.

Got more? Hit us up.

Get going with MOTU’s DP10 with these videos