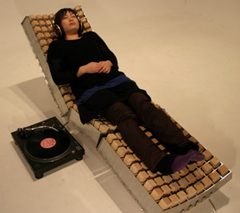 Apple’s iPhone — and the significantly more affordable, doesn’t-have-to-be-a-phone iPod Touch — are essentially pocket-sized, intelligent multi-touch controllers. Hooking them up to visual software as controllers simply requires some app on the phone to transmit data, and some way of dealing with that data on the computer side. We’ve already seen this a bit on Create Digital Motion, and we’ve been covering some of the specifics of parsing data with Pd (Pure Data), the open-source, tri-platform patching software, on Create Digital Music this week.

You have two options of software to use on your iThing. (You’ll need to “jailbreak” your device, as these are not — and may never be, for all I know — approved Apple apps.)

2. akaRemote.app by Masayuki Akamatsu of Japan: not open-source, not editable, but comes with a set of useful control templates, and you can transmit data to the app. See our look at a recent release. Upcoming Mac-only visualist app 3L has its own special akaRemote-based bridge called i3L, which also runs on iPhone/iPod Touch; see our look at i3L with artificial eyes.

While the iPhone and iPod Touch have Apple logos on them, all of these apps send OpenSoundControl data. That means any OSC-compatible software will work, which is gradually including more visual software, as well as modular apps like Quartz Composer, Max/MSP/Jitter, Pd/GEM, and vvvv. (I love saying that last one … vvvvvvvvvvvvvvvvvvv. Okay, moving on.)

Of all of these, Pd is the one solution that’s free, open source, and runs on any platform. That means it’s also a viable candidate for translating incoming OSC data to more broadly-compatible MIDI. (i3L has you covered, as it uses a MIDI bridge.) 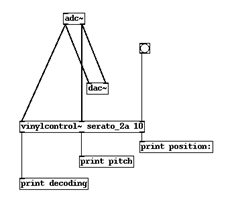 We have not one but two sets of tutorials / example patches for working with Pd on Create Digital Music, using a patch like Cesare’s, pictured above:

Control Music and Visuals with iPhone/iPod, Free Via Pd

I usually don’t ask that question, preferring instead to report on what other folks are doing. But it is always worth asking yourself — and it is an entirely personal question. I’m not totally convinced in the case of these devices that I’d want to buy one solely for VJing, but then, what makes this so cool is that it adds on additional functionality to a device. (Too bad Apple is being so uptight about third-party development, but at least there’s an SDK — and plenty of hackers ready to break Apple’s rules.)

My own preference remains squarely with tangible controllers and tactile feedback, especially as some of the advantages of multi-touch are diminished by the iPod/iPhone’s diminutive size. But I absolutely see the argument for using these. What do you think, dear readers?

Music Made from Microfiche, And Other Maker Faire Projects