3D lovers will always have a special place in their hearts for the red and blue. Photo (CC) Zach Manchester.

It’s time to enter a new dimension …the third dimension. With 3D engines easily able to handle multiple cameras, inexpensive systems for head tracking, and the growing ubiquity of not only red/blue stereoscopic glasses but the slick polarized glasses, too, visualism can finally leave Flatland. Here are just a few items from my recent inbox, indications of the tidal wave to come.

Our talented friends at Bristol’s AntiVJ collective have been playing with three-dimensional visuals. The setup uses rear-projected visuals, a real-time stereoscopic 3D system, and face tracking with an IR camera. The result: if you don polarized glasses, you get dynamic three-dimensional imagery with depth perception.

The system is based on:
– a stereoscopic display (similar to the technology used in Imax 3D). 6m x 3.40m – rear projection
– a realtime 3D engine, with a dynamic stereoscopic cameras: vvvv (DirectX, GPU optimized)
– a face tracking system, using an IR camera.

Obviously, you can’t get the 3D (stereoscopic) effect on your computer screen, as the installation as to be experienced in front of the special screen, with polarized glasses.

Project developped with support from TSB (Technology Strategy Board) and Pervasive Media studio.

So, that’s the expensive, laboratory way to go – and for now, it’s still in the Lab and the installation. The retro, ghetto-fabulous mechanism is, naturally, the brilliant red and blue glasses. (It also helps if you throw physical objects, like fish, to add to the effect.)

RobotKit (aka Josh Randall) and friends are bringing oldskool red/blue 3D to an actual party, not just the lab. It’s VJs projecting in 3D, and crowds of onlookers wearing the funny glasses. If you’re not in the Boston area, you can at least enjoy the hilarious flyer. It’s got the ultimate rallying cry for visualists everywhere who are ready for the stereoscopic revolution…

PUT THE GLASSES ON.

PUT THE GLASSES ON!!! from Robotkid on Vimeo.

Josh is associated with a certain series of games that, sadly, does not have any 3D glasses to go with it (though you can add a plastic guitar). But 3D gaming is, of course, also an emerging area. NVIDIA is most aggressive in this area, with their NVIDIA 3D VISION line. Because of the high refresh rate required, you need a specialized display. But provided you’ve got a supported NVIDIA card in your PC gaming rig, you can add the powered glasses and a lovely Samsung display for US$598; see their 3D Vision Kit. I think the pricetag is actually quite reasonable – I just also think the major cost is risk, as people wonder if similar capabilities will show up on projectors, digital TVs, and game consoles. I did get to try the rig at the Game Developer Conference in the spring, and it looks fantastic. 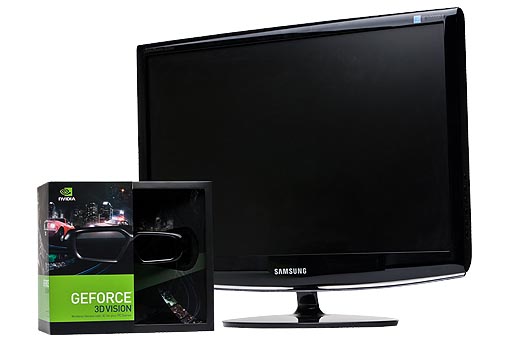 But that’s just slick gear. What about actual design? That was the question asked by the Kokoromi collective at their wonderful experimental design challenge, Gamma. At last year’s Gamma 3, designers had to find ways of integrating stereoscopy into a game. Whether this actually was critical to game mechanics is very much up for debate – because red/blue is less precise, it technically isn’t as up to the job.

But as an experiment, the designs were certainly promising, and being visualists, we like “pretty” as much as “functional.” And the art for the winning projects, plus the Kokoromi gang’s own entry, are all just stunning.

Because they just need the comic book store glasses, you can try the games yourself on any Windows system (one of the examples works on Mac, too): 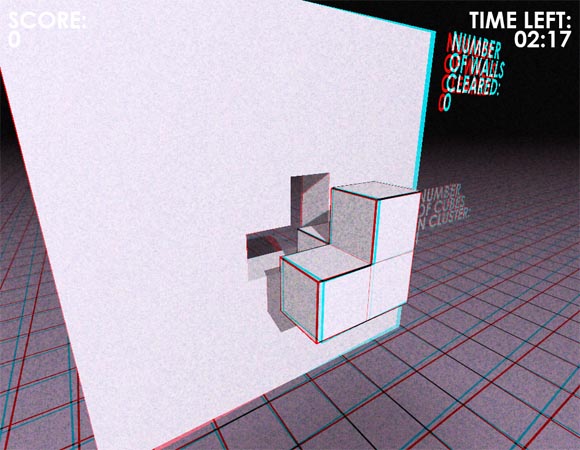 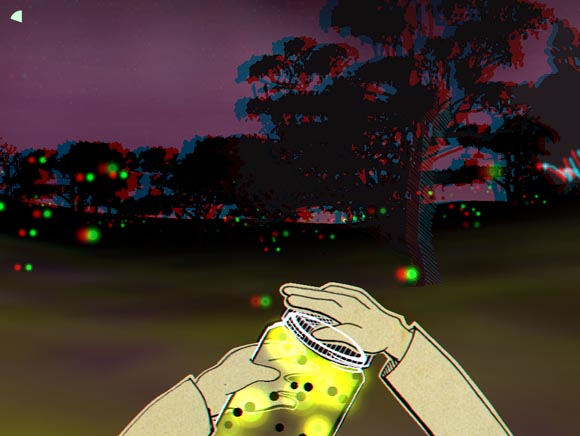 So, what do you think? What will the new 3D frontier look like? (Aside from, you know, having z depth?)

Alternatively, you could wear an eyepatch, and then just remove depth perception from the rest of the world. (Oh, and… never move your head.)

Update – via comments, 3D viewing on YouTube is done right, with two separate video uploads. Read the instructions, then check out the videos. Thanks, Forresto!