Processing, Enroute to 2.0, Gets a Major Refresh, Better OpenGL 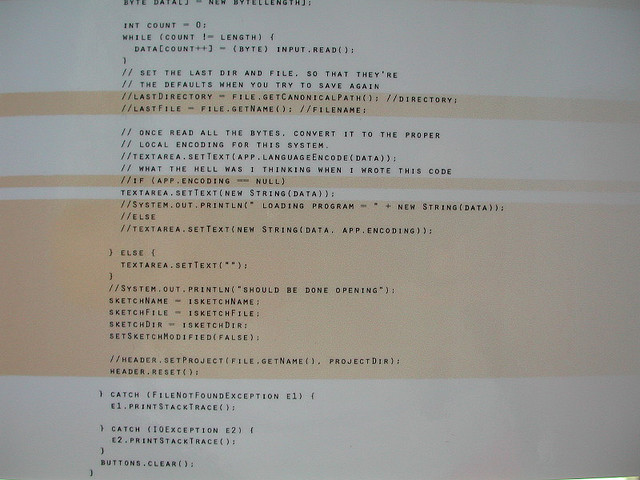 Processing helped bring coding to designers, artists, and creators who never thought they’d code. The beauty of it is, in a world where people often feel technology gets worse with age, Processing is getting better. Thank co-creators Ben Fry and Casey Reas and a team of volunteers.

Processing 0193 was released today, the latest pre-release (emphasis: pre-release) of the 1.x series. That puts Processing enroute to a landmark 2.0 release some time this fall.

Why does this matter? A few big improvements:

OpenGL, performing faster. GLGraphics is an alternative OpenGL renderer for Processing with blazing-fast performance, better native OpenGL support, the ability to add fancy shaders and OpenCL code, and other goodies. It’s a must if you care about performance, and incidentally, I find it makes moving between Processing and other environments (OpenGL ES on mobile, OpenFrameworks) much more intuitive. It’s now rolled into Processing as the OPENGL2 renderer.

Better Android support. OPENGL2 is also the default renderer on Android, making an ideal bridge between mobile and desktop. And other Android fixes are here, too, for working with libraries and the like – less relevant if you use Eclipse, but nice to have. I’m very much looking forward to Android tablets with video output – finally, the mobile Processing sketchpad and performance machine is here.

Language support. The Processing development environment will allow you to embed other projects, like Python and JavaScript versions, directly inside the main editor in your projects. (Not sure that’ll shake me away from Eclipse, personally, but it’s very cool – and it shows the new language-agnostic approach of Processing.)

Better default font. Phew. Mine eyes were blind, but now they see.

Fixes crap Chrome and Firefox performance for applets. I think Processing.js is becoming the preferred way to display things in browsers, but, if you’re showing Processing examples natively, please do us all a favor and quickly update them to the newer version!

There’s a ton of new stuff. Check out all the latest by reading, on subversion, the…
Changelog

I don’t want to endorse the newer build, because you should be aware it’s not officially supported. But I will say this – it’s worth updating to the latest 1.2x if you haven’t, particularly with modern Java language support. And I use 019x daily as my main build without a single complaint. (I work with students who all use 1.2x, and their experience has been superb.)

To me, Processing in Java and JavaScript and OpenFrameworks in C++ make ideal environments for creation. It’s an exciting time.

Retro, Graphical, SynthX is a Serious Touchable Synthesizer for iPad

Video: Live Beatmaking and Musicianship on Display; Details from the Artist, Logic Sampling