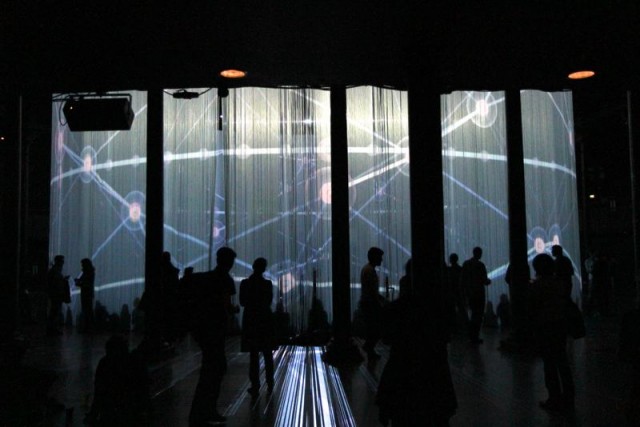 Photos courtesy the artist; version at The Roundhouse.

Digital artist and imagineer Memo Akten, known for beautiful work like his dazzling, sparkling open source fluid library, has lately turned his attention to intersections of visual motion and musical pattern. In a series of etudes, he applies simple, sinusoidal motion to musical patterning. That is, as abstract waves flow on the screen, they trigger overlaid patterns of rhythm, notes spilling out as waves intersect.

Experimenting with an idea and iterating in simple form helps Memo develop the idea here – and gives us a chance to experience that evolution by browsing the variations, as seen in splendid form below. But most recently, the work found a home at London’s legendary Roundhouse space. (See the video at top, which, being long and narrow, will naturally want you to watch in fullscreen.) Details, in a description of the video above:

Another study in simple harmonic motion and the nature of complex patterns created from the interaction of multilayered rhythms.
Visuals made with openFrameworks, which also sends MIDI to Ableton Live to create the sounds.

This version was designed for and shown at Ron Arads Curtain Call at the Roundhouse.

This ultra wide video is mapped around the 18m wide, 8m tall cylindrical display made from 5,600 silicon rods, allowing the audience to view from inside and outside. 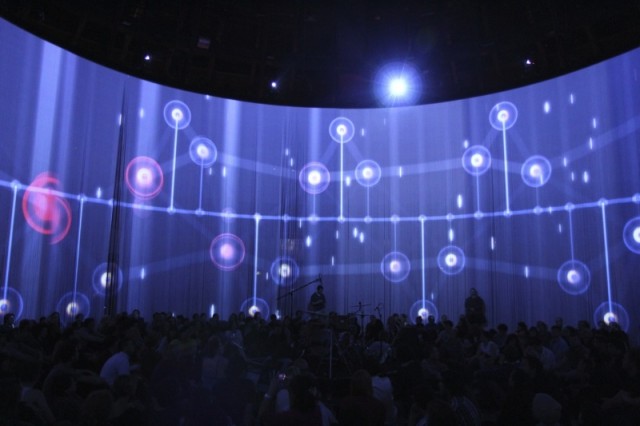 Some of those experimental etudes go other, also-fascinating directions:

This work in turn reminds me of another visual-musical experiment, Alexander Chen’s visualization of a Bach ‘cello suite. One criticism of that work was that the circular path that generated the rhythms was not precisely what you hear in Bach – but this work further explores that notion; what you get is something other than perfect, regular, Classical rhythm. (See the video below.)

Alexander had a lot to say about that work, and visual-musical connections in general, when we spoke with him:
Bach Cello Suite No. 1, Visualized in Sweeping Arcs, and the Math Beneath

From Sounds to Wave Patterns to iPhone Cases, a Design Made from Footsteps