Synthesizing Sound and Image: A Conversation with a Creative Duo from Korea [unrender] 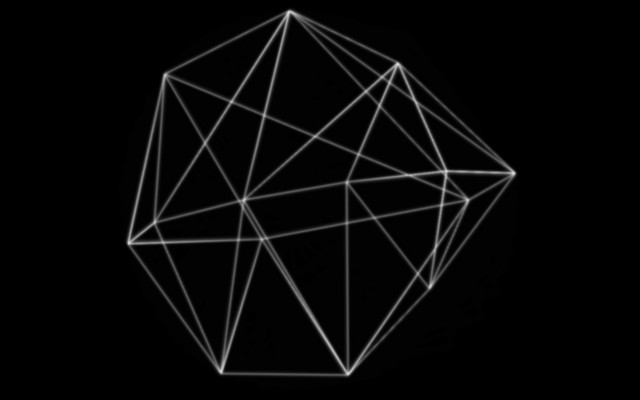 From deep in Seoul’s underground, Maxqueen (Kloe) and Chang Park have forged an intimate audiovisual collaboration, in a rich dance of minimal, generated geometries in live music and image. Spanning Korea, Baltimore, Maryland, and now Berlin, they’ve played some of the biggest tickets in live techno (for Maxqueen) and digital media art (for Chang).

We’re thrilled to have them playing together – in their individual projects and then a duo – in Berlin on Friday night.

And we wanted to talk to them a bit about the craft of collaboration, and generating live performance through careful control of parameters in homemade patches in Max for Live and Max/MSP/Jitter.

Looking into their sets, what you see is a kind of joint modular synthesizer for music and visuals, a rigorous and disciplined focus on even the simplest parameters in order to make the fusion of optical and aural clear. We discuss their process, and – in a topic I’m sure is familiar to our readers in many corners of the world – how a scene is beginning to grow from the first seeds in Seoul. 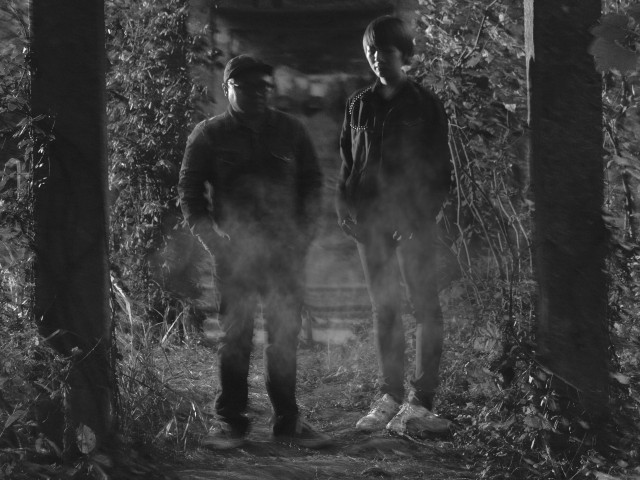 First, let’s watch a bit of their work (hoping for even better documentation after Friday):

CDM: Can you talk a little bit about the scene in Seoul? What are the venues like? What sort of artists are there, and what kind of exchange is there around this sort of work?

Chang: Well, being honest, Seoul’s new media or experimental media scene is quite small. We do have loads of commercial clubs, but live venues who take experimental media seriously are kind of hard to find. Because of the compactness of the scene, everyone knows everyone, which comes handy when you’re collaborating.

When I was in Seoul, I was part of a monthly live presentation, WATMM (We Are The Music Makers). We host 4-5 live acts every month with a new lineup or new live projects from our friends and people who are doing similar stuff. The interest from the public is still growing, and I think it’s going in a good direction.

We also have couple of private institutes for VJing and advanced motion graphics, experimental coding. I think Korea’s scene is slowly moving forward. 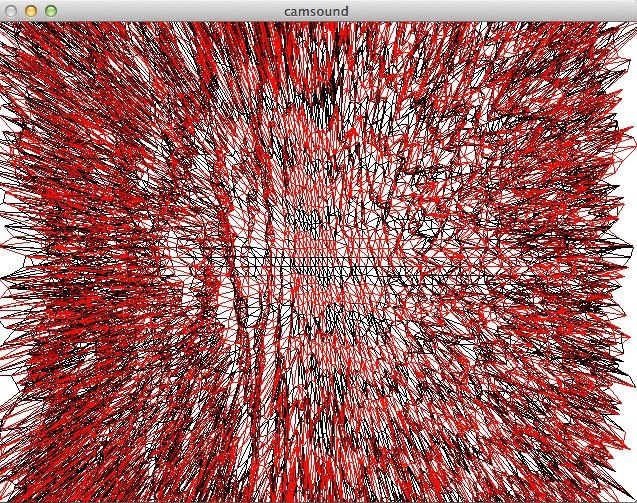 Now you’re in Berlin, of course. How would you compare Seoul and Berlin in terms of that scene?

Chang: I think the biggest difference between Seoul and Berlin is the population of artists who is into these kind of things. Again, we have a really small scene and community [in Korea], so sometimes chances are very low to see something moving very fast. But since Berlin has a more diverse artist’s communities and events, you find out quickly how rapidly the scene in Berlin is moving.

You talk about getting into Max and Max for Live. How did that come about? How are you using those tools now?

Kloe: As I’m a DJ, I started with Max for Live rather than Max/MSP. I started using it for making effects and sequencers, then I started getting interested in using it in a more expanded way. So I took workshops and seminars and put a lot of effort into studying. So I’m kind of a newbie in the audiovisual scene, but as I’m going to KNUA (Korea National University of Arts), studying Music Technology (Computer Music) as a major, I’ll be more frequently using those tools in order to express my ideas.

Chang: I was an Interactive Design and Sound Art major at the Maryland Institute College of Art. A major portion of my own research was experimental electronic music and sound art. At the time when I was still at school, I started to come up with some ideas of sound installations with interactivity. I started learning Pure Data first and moved to Max/MSP/Jitter, Processing, and finally physical computing using Arduino and the microprocessor.

But I don’t really care about interactivity or how much advanced tech I have in my piece anymore. At the end, it’s just tool to express. I try to develop the idea as much as possible and decide which software or developer tools I will be using to come up with final output. Sometimes it happens without using any of them. 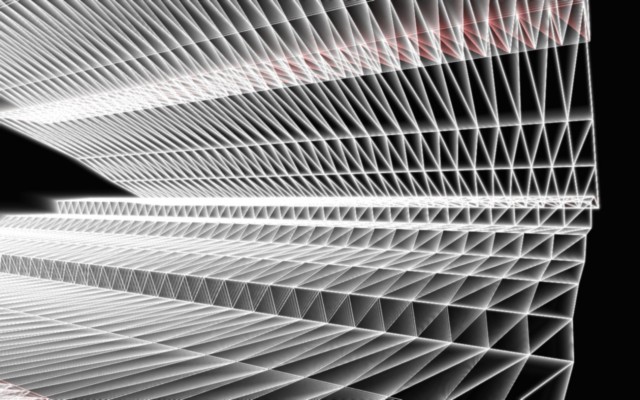 It seems your audiovisual collaboration is really quite close. How do you work together, and how do you relate these two media?

Kloe: I think if music is really abstract, then any kind of visual works. So normally I make sounds and music first that starts with my original ideas, and then try to express it with visuals. I want people to imagine my sound when they watch the visual side of the piece, and when they listen to the sound, it should lead them to imagine the visual. After a draft rendering, I craft it like I’m a jeweler. Normally, I do consider a lot things that people don’t care about. Thank makes me really exhausted, but I like that kind of work at the same time.

Chang: It always starts with one idea and concept; I try to spread it out in different directions. I test a couple things via different approaches and combine them at the end and see if anything interesting comes out. If it doesn’t work out, I do it again. An important element of doing this process — you always have to keep the fundamental concept frame in both audio and visual and don’t try to pass the borderline of it.

Is there a difference in your approach to phrase and form when treating music and visuals, or do you approach them in a similar way?

Chang: Similar. Always try to keep the balance between two of them in one frame.

Kloe: I think the visual is more specific, as I told you before, so when I’m approaching it with visual, I try not to constrain my imagination.

How do you associate visual images with sound?

Kloe: I make my own algorithm with every single piece. So there are many ways that I attach sounds and visuals, but in this case, I linked sound with visuals via amp, LFO frequencies, and filter frequencies with dimension, colors, and the pixel coordination value of the visual objects that I generate with the algorithm.

Maxqueen is one of the noteworthy artists from Seoul, South Korea. Starting exposing herself and her DJ/producing skill at small underground parties in Seoul but soon, she spins in some of Seoul’s big name acts/festivals such as Pentaport festival, World DJ festival, Green Plugged RED and many more.

Not being satisfied with audio works, she started making techno live set using Max/Msp, now she is be able to express her ideas with audio and video both as a new media artist.

Organising underground parties/live performances, and running her own label, few sounds and Remarkable Theory, she tries to spread techno music and a new kind of digital art to Seoul’s art scene and spreads out to Japan and other asia countries.

Now as one of the most promising artists of Seoul, Maxqueen is getting more and more attention from public and audiences.

CHANG_PARK
CHANG_PARK is a Baltimore, Maryland / Seoul, Korea based sound and new media artist and electronic musician. Through his variable sound presentations – interactive installations, performances, and compositions – he investigates sound from a psychoacoustics perspective as a subliminal communication between object and space.

He received a BFA degree in Interactive Design & Art with a concentration in Sound Art from the Maryland Institute College of Art in 2012. He currently resides in Berlin, Germany and trying to involve more into the German art scene.

LFO is an audiovisual piece which is coded by using Max/Msp. As each of the sound and image generated by coded algorithm are linked organically, video controls audio and audio modulates video in real-time. As you can see from the title, LFO (Low Frequency Oscillator) is in charge of the main axis of variation, high frequency and Low frequency controls the geometric objects’ colors differently.

LFO was originally designed as a multi-channel live performance, but will be played in 2 channels at this concert. Starting as a single sine wave without any rhythm track at first, then the sine wave and a bit of techno are being changed to heighten tension of the song but it tries to be moderate in order to keep a balance with the minimal video at the same time.

Unconscious Pattern is the latest Improvisational and generative Audio/Visual perfomative piece by CHANG_PARK.

Theorem is the title track of Korea’s experimental electronic band, Monokord’s First album “Theorem.” From the Beginning to the end, each tracks have names like, “”Crux,” “Lemma.” “Quad erat faciendum,” and “Proof.” Whole concept of the album starts as hypothesis and moves toward proof of theory. “Theorem” shows the leading principle of the album and at the same time express their fundamental concept of sonic creations. Because of that “Theorem” has more convinced rhythmic patterns & Metaphysical sound outputs. While each sonic material of “Theorem” have erratic panning positions and amplitudes, it creates atmospheric anxiety and finally settles down at the end and fades out.

This time Monokord will be playing a live audio visual version of “Theorem” with found footages and signal processing.