Remember 1995? Computers onstage were still a comparatively risky proposition – often relegated to MIDI, more prone than today to instabilities, and absent today’s DJ and live performance apps. Monolake, which is now just Robert Henke, was both Robert Henke and Gerhard Behles. (Gerhard is now plenty busy being CEO of Ableton.)

We assume that software is ephemeral, likely to be lost to history. But in this case, software is leaving a record that’s actually far clearer than the one left by musicians using hardware.

And the PX18 is an amazing piece of history – one that exists in software form. You can theoretically even download and use it, though you probably wouldn’t want to – it’s somewhat idiosyncratic software and in need of some updates. That does, however, point to the possibility of documenting musical practice in software form as archival activity. (Having just been digging around Soviet-era light organs, software offers some opportunities for media archaeology that hardware may not.) 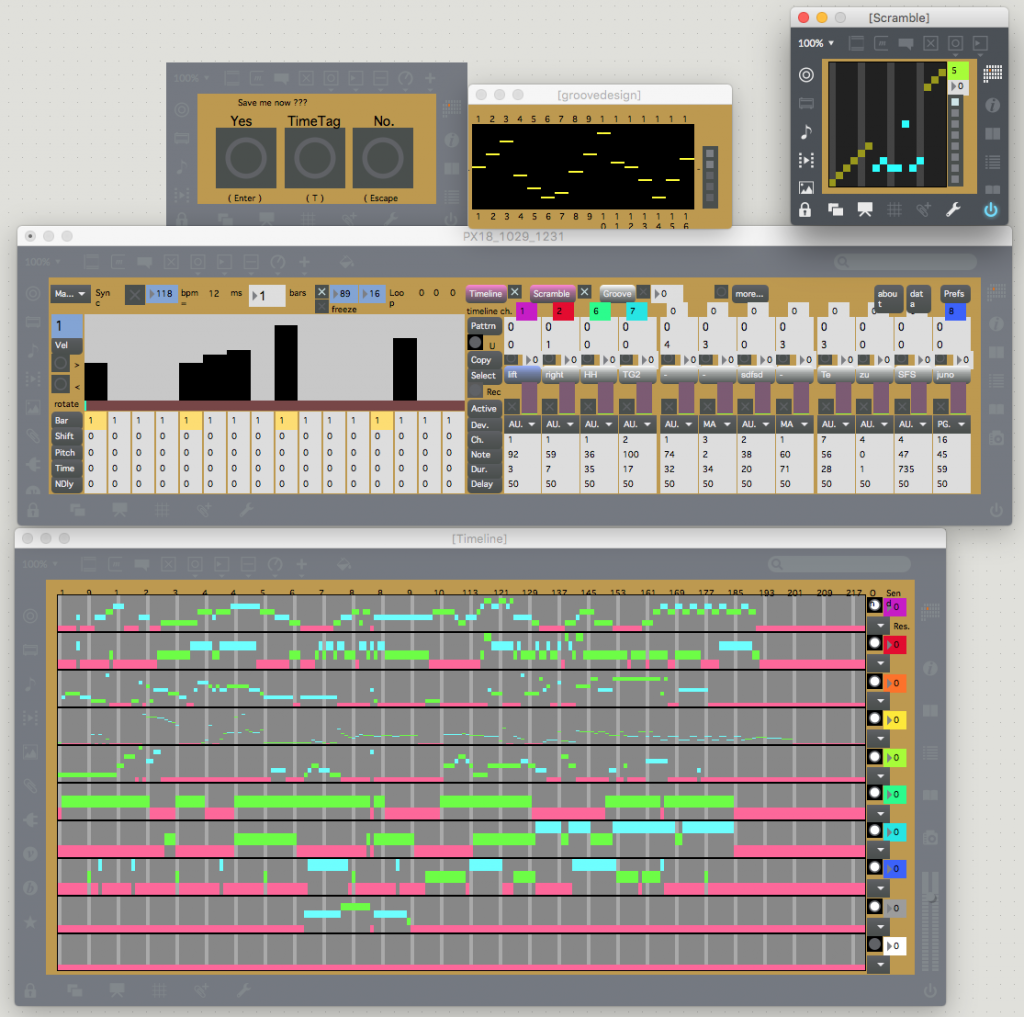 The PX18 is important historically for two reasons. One, its a glimpse inside the imagination of Monolake. This is, effectively, the template for a whole heck of a lot of what would come to be called IDM. It’s about grooves, but with elaborate compositional permutations, modified in sparing, thoughtful ways. Embedded in the design of this software, you can see that conceit – the ability to tickle brain and dancing body all at once. In fact, I think even “IDM” is really unfair, in a way: this is at the heart of a whole lot of what now defines the Berlin sound in dance music.

Two, connected to that, the PX18 is widely accepted as the spiritual and technical predecessor to Ableton Live. The ideas Monolake used as musicians had the PX18 as a testbed, and gave Gerhard and Robert a clear sense of what they wanted when they founded Ableton at the end of the same decade. One of the amazing things about Live as software is that it evidently sprung into existence more or less fully-formed — you can see screenshots of early builds of Live and they’re fairly identical to what shipped as 1.0. (I should know; I was a 1.0 user.) A commonly repeated misconception, in fact, is that Live was prototyped in Max. While that was later true of specific devices like Operator, Live was written in C. The prototype, then is really the PX18.

But look closer at the PX18 and you see things that actually aren’t in Live. Rotational compositional shifts here are the focus in a way they aren’t in Session View. If Live is about triggering, the PX18 is about variation. I don’t think it would have caught on as commercial product, but that isn’t the point. The PX18 is really its own musical animal, and I think you can hear some connection between how it was built then and how Monolake’s – and Robert’s – music has evolved to now.

It’s also significant in the evolution of this form of music that all those compositional parameters are so immediate and accessible. Part of what may stop this kind of music from being overly cerebral is making compositional ideas something you can play with – something open to improvisation.

That of course has made Ableton work (on its good days, anyway).

But I also admire the extent to which this is an idiosyncratic creation of artists made for themselves. Robert Henke today prides himself on coding his own laser visualizations, and that strictness of form is evident when you hear (and see) his performances. The PX18 is a reminder of why making your own tools can be meaningful. It’s not a matter of authenticity of performance. It’s a question of being able to shape tools to realize your own musical concepts, to embody your ideas in your work.

It’s impressive to watch this ’95 creation still chugging along – even if for no other reason than historical curiosity.

But looking at the ideas contained within, I hope it’s a reminder to others to create new tools and ideas. With Max for Live, Reaktor, SuperCollider, Pd, and others, not to mention coding tools that are friendlier than ever, it’s a great time to do so.

A major breakthrough in physics is heard, not seen