This is the next-gen notation tool from original Sibelius team

It’s been a few years since the original development and management team behind Sibelius found themselves unemployed at the company they started, following a restructuring by owner Avid. Since then, Sibelius has continued to progress, but in a way that’s best described as incremental. It’s now a subscription product with an emphasis on the cloud, like other Avid tools, and updates have focused on features like pen support and small notation details. If you’re happy with Sibelius, that’s not a bad thing: it’s the recipient of a steady stream of updates.

But what if there were to be something new in music notation software?

Much of the team behind Sibelius migrated to a new home – and a new patron. Steinberg, makers of Cubase and Nuendo, set up an R&D center in London, aiming in their words “to develop next-generation professional scoring software for composers, arrangers, engravers, copyists and educators.” Dan Spreadbury, who many of us knew from his Sibelius days, took on a Steinberg title and started blogging the new effort.

“Next-generation” suggests something more than just incremental. But while Dan’s blog has been very particular about details (more on that below), it’s been pretty vague on the big picture – until now.

Today, Steinberg is at last announcing what the team has been working on. It’s called “Dorico.” And it’s coming in the fourth quarter of this year.

So, what’s “next-generation” about Dorico? We get some clues in the initial announcement.

It’s important to remember that the original version of Sibelius was revolutionary – even if today there are several equivalent products with very similar feature sets. First available for the little-known Acorn workstation platform, Sibelius was ground-breaking in that it could instantly reflow enormous scores when changed. Entry was for the first time as quick as touch-typing, thanks to a clever set of keyboard shortcuts organized around the numeric keypad (something you can now ape in Finale). And its scores, while not quite up to the level of some dedicated engraving tools, also looked really good.

But that was a long time ago.

The new Dorico would seem to carry some of the philosophy of the original Sibelius, but re-conceived. 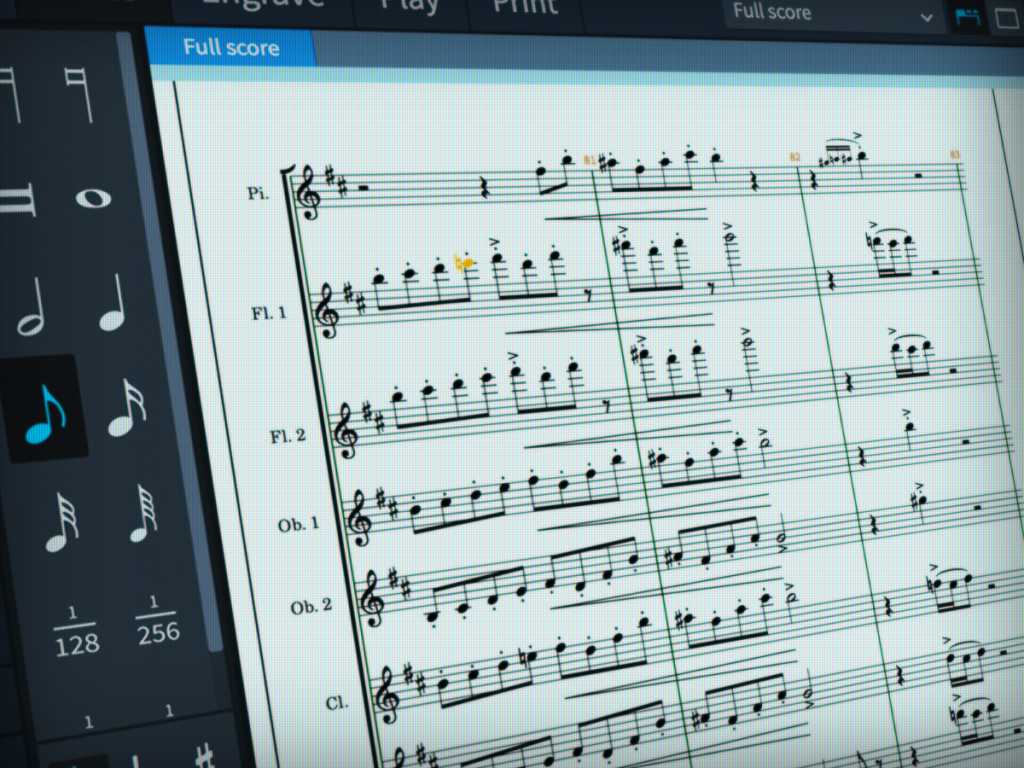 Steinberg aren’t releasing any full screenshots today of this in-progress product, but we’ve gotten a rough view from the R&D blog.

But there’s something different, too. You can now work, at last, in open meters or freely rebar existing music. That’s something die-hard engravers have had in tools like the (non-GUI) SCORE, but not in mainstream tools.

What the heck am I saying? Well, think about the ability to work with notes as easily as you can with characters in a word processor. Insert music within an existing passage – without having to move everything around by bar and make space first. Change the durations of existing notes.

These are the things that muck up most notation tools. Changing layout, changing duration, or changing musical ideas often involves manual labor. (Sorry, uh – for the London R&D team, without manual labour.)

Sibelius also was the first major tool to push playback as a central feature and a leader in bundling instruments. True to that idea, and pairing with their new friends at Steinberg, Dorico ships out of the box with a bunch of VSTs, including HALion Sonic SE and the HALion Symphonic Orchestra library.

That’s a big deal, too – these days, you’re often expected to demo playback before you get to rent an orchestra to play, especially if you’re working in film and TV.

We’ll of course need to see the full notation product to make a good evaluation. But some of the specs are at least suggestive; I’ll just quote directly here. New engraving output alone is something we’ll have to see, but interesting. (Generally, that involves both typeface design and an underlying engine to treat that, which is one of the many reasons notation software is hard to do well.)

This is promising too:

Apart from the ability to freely treat rhythm, Dorico finally promises to solve the clumsy ways different sections and parts and so on are handled:

This part should give you some Sibelius flashbacks:

• Streamlined, single-window interface puts every tool at your fingertips
• Use your computer keyboard or MIDI keyboard to input music quickly and efficiently
• Import and export in MusicXML, MIDI and graphics formats

And this bit should both give you Sibelius flashbacks and a reminder that this is now a Steinberg product:

We’ve also been able to get some great news from Dan’s blog.

First, anyone who’s ever used any computation notation software is going to love these next two images and “get” them without any explanation. That’s Dorico on the top. 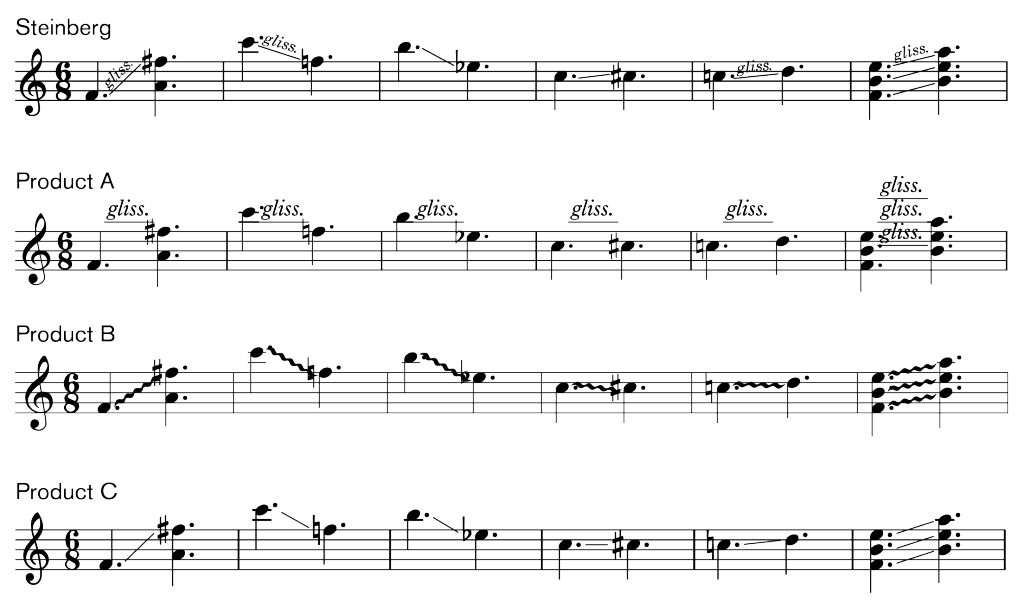 Dorico fixes the way glissandi works (including the annoyances in Sibelius). 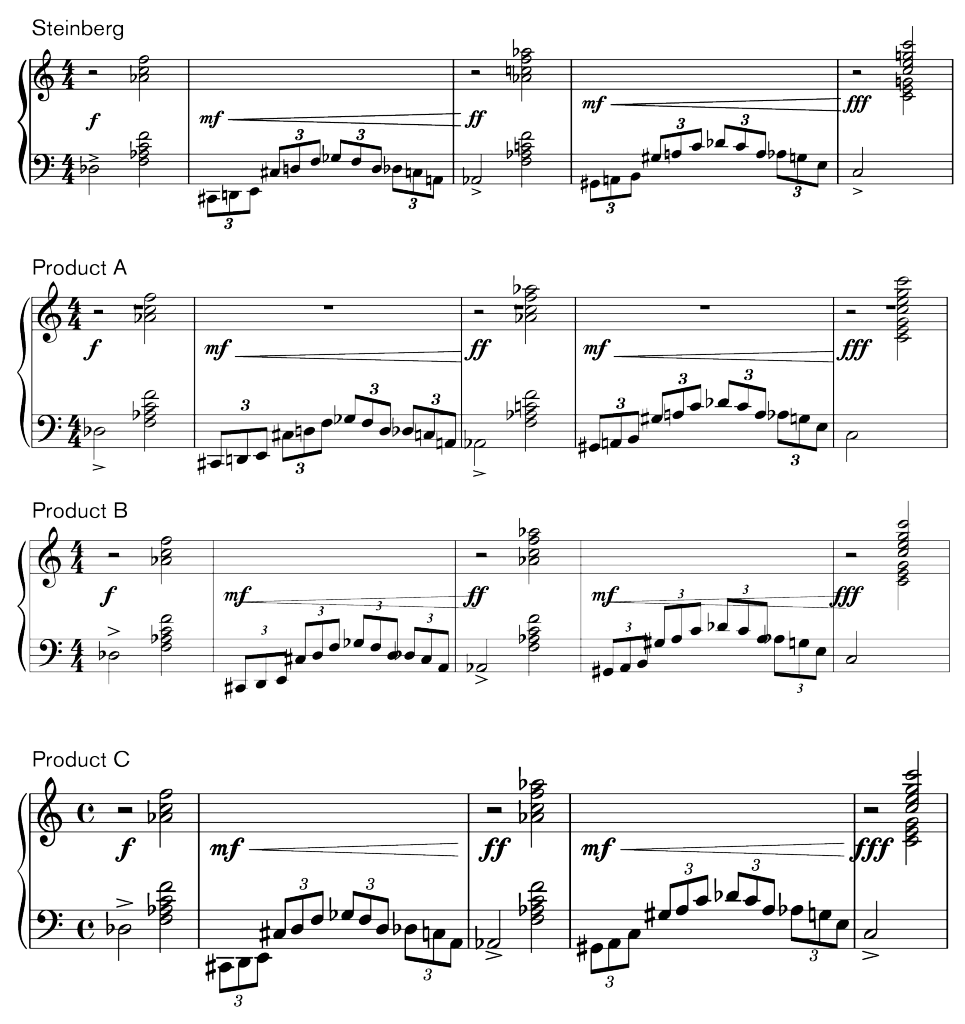 Finally, dynamics are fixed, too. I could probably have gotten a second degree in the time I spend nudging dynamics around, or … at least would have had more of a life in composition school. Then again, I might not have wound up fleeing to electronic music production, so you wouldn’t have gotten CDM. I’m joking. Nearly. Maybe.

Sibelius was an early proponent of floating properties (rather than digging through dialogs); here you see the “next-gen” take on that idea.

List for Dorico isn’t cheap. It’s 579€ including VAT, though I expect almost no one will pay that – education pricing is 349€ and there’s a limited-time crossgrade for 299€. I expect the whole audience for this product is either in education or has a copy of Finale or Sibelius lying around, so problem solved. Subtract VAT and calculate to whatever the dollar is worth versus the Euro by the end of the year, and this is a pretty standard price.

We don’t get to see what this looks like, though I’ll try to twist Steinberg’s arm on that as soon as possible. You can read Dan go into a long an interesting Wikipedia-style rabbit hole on history explaining how Dorico was named, which I find fascinating – and it also reveals just how lofty the team’s goals are.

A video glimpse of Teenage Engineering’s OP-Z in action

MacPlug-insWindows
The best Cyber Monday deals you can get now on synths, plug-ins, and more
MacWindows
MadMapper 5.2 is here, with more lasers! (and DMX CSV, Xbox controllers, and Kinect)
Plug-ins
SAND hosts your iOS plug-ins, sequences them with patterns, records them
MacWindows
The very best Black Friday and Cyber Week deals on music and motion – a running list