Can you look deep into dystopias, and the darkest uses of technology for surveillance, and come away optimistic? Can you work across every medium imaginable, eschewing any particular style or genre, yet retain a voice? For the answer to these questions through an artist with a unique level of experience and a long-standing body of work, CDM’s Zuzana Friday talks to Franck Vigroux. It’s a vision of a dark future that might just encourage you. -Ed.

Looking at Franck Vigroux’s resume, you’d never imagine he’d fly under the radar. Yet this award-winning, endlessly touring, prolific collaborator of a musician only recently got the attention of English-language media. 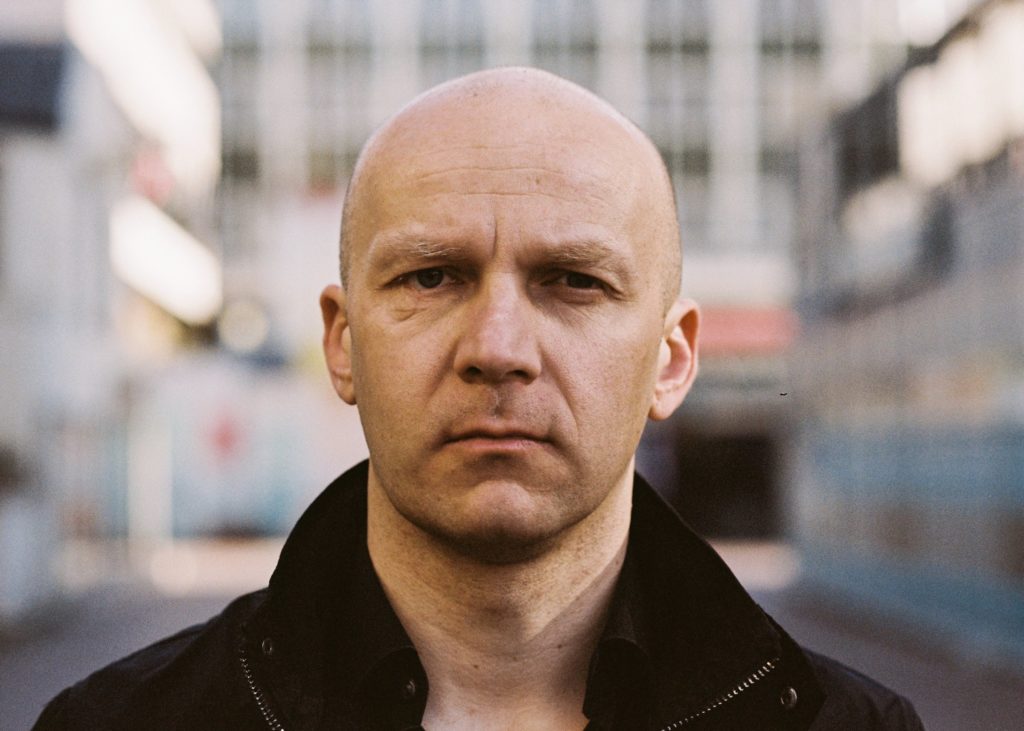 Finally, that’s changing – with a little help from his friends. So collaborative projects have gotten attention, like the album Peau Froide, Léger Soleil (recorded with Mika Vainio and released on Shapednoise’s Cosmo Rhythmatic label), and his intense audiovisual performance Centaure, made with Kurt d‘Haeseleer, an artistic director of WERKTANK. There was a reworked version of Kraftwerk’s Radioland, for the Leaf label, founder of the company D’autres Corder, the Tobel series with the German composer Reinhold Fried and Broken Circles Live with France’s Ensemble Ars Nova. There have been performances with image and dance.

And this year, Vigroux has what he says is the final chapter of a dystopian series of works. The solo album Rapport Sur Le Désordre, including several tracks from that AV show Centaure, follows the albums Camera Police and We. That’s We after the novel by Yevgeny Zamyatin, father of the futuristic critique in scifi that would come to include Brand New World and 1984. He also composed D503, a radio work for the French National Radio based on Zamyatin’s novel.

Behind all of this work, irrespective of medium or collaborator, is a coherent vision – rendered in unsettling atmospheres shattered by dramatic disruptions. And there are questions about our time, about technology and mass surveillance.

Apart from harsh electronic and mechanical noises wrapped around his minimalistic beats, Vigroux also uses silence as a material. There’s a cinematic feeling – and accordingly, he frequently works with visuals, as well as directing several videos himself. (See the music video for his track ‘Dust,’ which you can watch in a pixelated quality below.)

We talked to him about that vision of his music and of our future.

The name of the album can be translated as a ‘report on disorder’. Does this report reflect the current situation in the world?

There’s a poem by Heiner Müller called Rapport sur le début, which can be translated as ‘a report of the beginning’. Three years ago, I did a stage performance using a lot of Müller’s poems including this one. So I just played with the name of the poem for this album.

Is there a specific concept behind this record, or do you continue using the rather abstract ideas of dystopian sci-fi which were present in your work throughout the last few years?

Some years ago, I did a composition for a French radio about the underrated seminal dystopian novel written by Yevgeny Zamyatin called We. And some elements from this piece still remain in my work, particularly when I compose music. But conceptually, it’s rather a follow-up to the abstract ideas I already worked with than a narrative depiction of the book. This album is definitely the final chapter of the dystopian series. I think I’m done with using slogans and vocoders, but who knows, as this subject is so present.

Speaking of the vocoder, who does the voice on the new album belong to, a human, a post-human?

I’ve used the vocoder or some kind of voice transformer for years, particularly since my album Camera Police, which already tackled the dystopian society topic.

Nowadays, the transformed, cyborg-like voices are everywhere around us, and I find it a bit freaky. But I’ve always been fascinated by science-fiction and this robotic world, and it’s something that I translate in my music. And it’s also a way to do something cinematic. 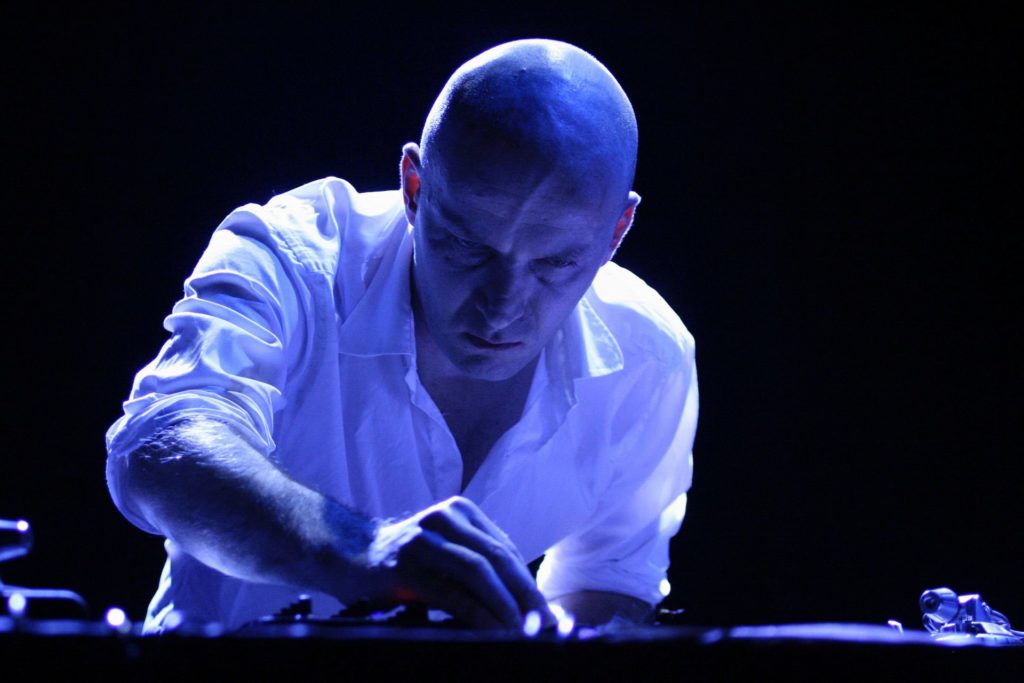 Apart from the vocoder, which instruments have you used for the recent album?

I used the Elektron Octatrack and a lot of analog and vintage synthesizers. I always buy and sell a lot of things and try out new equipment, so it’s hard to keep track. Lately, I record almost everything live and in stereo.

As for software, I use [Apple] Logic 9 and i don’t want to upgrade. But the Logic 9 on my laptop isn’t working well anymore, so I’m now trying to avoid using the computer as much as possible and just record everything live, everything stereo.

So how does your recording process look like? You have an idea of a track in mind, then you play around with it and eventually, when you feel like you have enough material, you just press play and record it live?

I have no rules. I always produce a lot of sounds and music and then I try to compose it all together. As I play live a lot, everything is live-oriented at first and made with a live performance in mind.

So your recordings come more from playing live performances than producing in the studio? Usually, it’s the other way around.

Basically, yes. Sometimes we do complex compositions with sounds spreading everywhere around the studio and at the end we aren’t able to play it live. Of course when I work with an orchestra or for radio, I prefer a different approach. But as for my solo music, this is how it works.

Several tracks in Rapport sur le Désordre comes from Centaure, a performative audio-visual show you did with Kurt D’Haeseleer. How did you meet Kurt, and how did you start working together?

We’ve been working together for about four years now. Our first collaboration was for my piece called Aucun Lieu, which was a multidisciplinary performance with one dancer and screens, and last year, he worked with me on Ruines, another performance for theatre with a bigger crew, performers, light designer etc. — a kind of Gesamtkunstwerk. So for Centaure, we decided to do something without installations and more simple in terms of logistics.

At first, the concept comes. There is always a story behind. For example, regarding my project Tempest which I did together with my frequent collaborator Antoine Schmitt, we wanted to tell a story about cosmology and noise, so we were researching this topic. After I created composition inspired by that, we were gathering material and worked together on the visual side and how will it fit together.

Tempest is a work in progress we played it a lot live, and it’s never exactly the same, that’s also the interest of generative video. Antoine actually controls thousands of pixel live and improvise forms with it . Contrary to that, Kurt is doing pure video, so it’s a different kind of process. I gave him tracks and he started looking for imagery. We always exchange our current work and ideas we’re working on, so consequently, my work is influenced by his images and he’s influenced by the music. It’s a back and forth process.

Apart from visual artists, you also work with other musicians. I’m curious about how do you combine your talent for improvisation when playing with others? And does each collaboration has its specifics – how does working with Mika Vainio differs from playing with Reinhold Friedl, for example?

It’s very different. For about 10 years, I was a part of an improvisational scene, but the last few years, I haven’t been improvising much, except when working in the studio where improvisation is part of my working process.

My project Tobel with Reinhold is about improvisation. I know which musical material to use and so does he – he’s really interested in textures and sounds, so rather than about harmony, we talk about structure and duration. We just released an album on Monotype Records this June.

With Mika, the process is very different. Most of the time, we prepare various sequences and patterns and we decide what would work together and in which manner. I’d say that it’s 50% improvisation and 50% composition.

Coming back to Centaure: I know that even though the performance has changed since its premiere and it’s evolving with you, the description of the story lies in the dystopian future without humans, where technology pervades everything alive. But your whole career is built on using technology in one way or the other. What’s your relationship with technology? Do you perceive it as something which will overpower humans one day, or do you just like questioning its functions?

Zamyatin wrote his novel in 1920, almost one century ago. And since then, nothing’s changed. The politics still use technology similarly to the novel. When you think of the NSA, that’s nothing new! The technology is used to control everything. So it’s important to be reminded of this and not just accept everything as normal. You have to be aware of what’s going on and think about it.

Of course technology is important, but I don’t want to be controlled by it.

You mentioned that this album will be the closing chapter of the whole dystopian series. What’s next? A utopia?

Well, I’m actually a very optimistic person. To definitely close the chapter i want to adapt live my piece D503 composed for Radio France 5 years ago, a piece for piano, electronics and voice (text from We) . Originally, I wanted to do a storyboard for a short film… But eventually, I realized that doing the whole animation for a cinema requires such a big budget, that I decided to do a live performance using the storyboard instead. I asked Berlin-based sci-fi illustrator Simon Lejeune to work on it. I don’t if the project will happen but we are working on it. 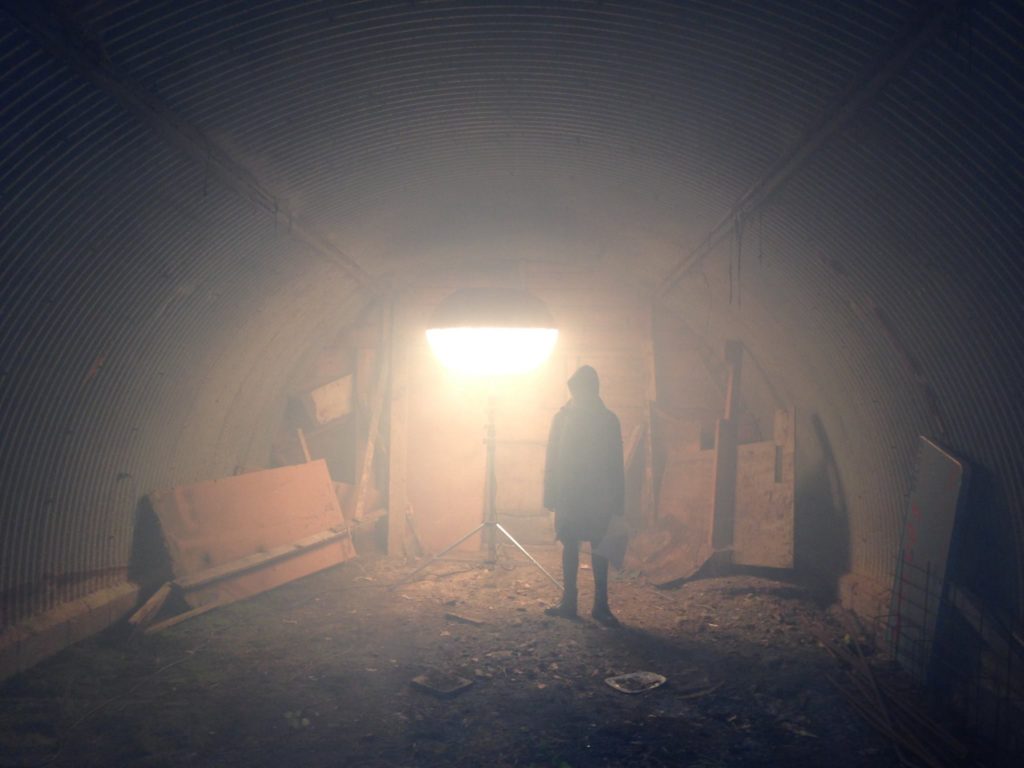 Another thing I’m working on is a new stage performance for 2018 called Flesh, kind of sequel of Aucun Lieu and Ruines. I’m partly inspired by J. G. Ballard’s novel Concrete Island by, who also wrote Crash, which was later directed by David Cronenberg. The idea is that someone has an accident on a big highway, but nobody sees him and he can’t move from the spot of the car crash. I just want to get a similar atmosphere like into Ballard’s story, but not only of courses…

So would you say that you’re moving from external topics towards inner perception?

Yes, I’m heading the direction of mental or personal experience.

So you are influenced by Zamyatin and Ballard, and your new music video for Simulacre made by D’Haeseleer is inspired by Philip K. Dick. What are other favorite writers or books of yours?

Oh, there are too many ! Recently i did a new composition for the radio and a live performance called Racloir with texts and poems from Heiner Müller. He is probably one of my favorites….

I see a parallel here, you both tried to make sci-fi movies and what you’re left with is a storyboard!

Thanks for your vision, Franck. We hope to keep track of these projects on CDM. -Ed.

artistsinterviewsvideos
Trace the Black roots of disco, house, and techno in videos and reading – summer school is in
artistsGermanyinspiration
Hard as queer: Brutal Gegen releases and videos capture a party that’s defiant as ever
artists
Darwin Grosse, musical visionary and voice for Max and DIY learning, has passed away
av
Houdini’s tricks: inspiration and tutorials for the essential free-to-start visual tool