A guide to VCV Rack, a software Eurorack modular you can use for free

In a few short weeks since it was released, VCV Rack has transformed how you might start with modular – by making it run in software, for free or cheap.

VCV Rack now lets you run an entire simulated Eurorack on your computer – or interface with hardware modular. And you can get started without spending a cent, with add-on modules available by the day for free or inexpensively. Ted Pallas has been working with VCV since the beginning, and gives us a complete hands-on guide.

There’s always a reason people fall in love with modular music set-ups. For some, it’s having a consistent, tactile interface. For others, it’s about the way open-ended architectures let the user, rather than a manufacturer, determine the system’s limits. For me, the main attraction to modulars is access to tools that can run free from a rigid musical timeline, but still play a sequence. It means they let me dial in interesting poly-rhythmic parts without stress.

An example: I hooked a Mutable Instruments Braids up to a Veils modular, triggered their VCA with an LFO, and ran the resulting pulse through a Befaco Spring Reverb. I used this patch to thicken the stew on a very minimal DJ mix. I also had a simple LFO pointed at a solenoid attached to a small spring reverb tank boinging away in a channel on the master mixer.

This is all pretty standard Eurorack deployment, except for one tiny detail – all of the modules exist in software, contained inside a cross-platform app called VCV Rack.

VCV Rack is an open-source Eurorack emulation environment. Developer Andrew Belt has built a system to simulate interactions between 0-5 volt signals and various circuits. He’s paired this system with a UI that mimics conventions of Eurorack use. Third-party developers are armed with an API and a strong community.

VCV Rack is open-source, and the core software is free to download and use. The VCV Rack website also features several sets of modules as expansions, many of which are free. The most notable cost-free VCV offering is a near complete set of Mutable Instruments modules, under the name Audible. Beyond the modules distributed by developer Andrew Belt, there’s an ecosystem of several dozen developers, all working on building and supporting their own sets of tools – the vast majority of these are free as well, as of the time of this writing. 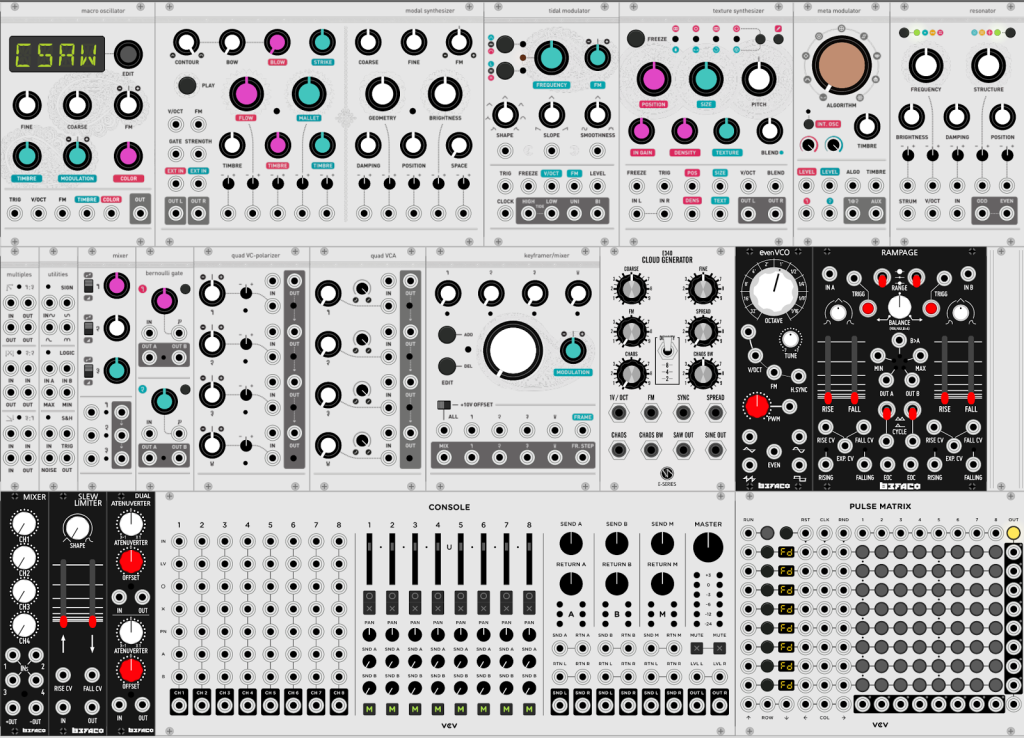 The result is a wide array of tools, covering both real-world modules (including the notable recent addition of the Turing Machine and a full collection of Audible Instruments emulations) and original circuits made just for Rack. The software runs in Windows, Mac OS and Linux, though the system doesn’t force third-party developers to support all three platforms.

VCV Rack is a young project, with its first public build only having become available September 10th. I became a user the same day, and have been using it several times a week for several months. I don’t usually take to new software so quickly, but in Rack’s case I found myself opening the app first and only moving on to a DAW after I had a good thing going. What continues to keep me engaged is the software’s usability – drop modules into a Rack, connect them with cables, and the patch does what it’s patched to do. Integration with a larger system is simple – I use a MOTU 828 mk2 to send and receive audio and CV through and audio interface module, and MIDI interfacing is handled in a similar fashion through a MIDI module. I can choose to clock the system to my midiclock+, or I can let it run free.

VCV Rack runs great on my late 2014 MacBook Pro – I’ve heard crackling audio just a handful of times, and in those cases only because I was doing dumb things with shared sound cards. To a lesser degree, VCV Rack also runs well on a Microsoft Surface Pro 3, though using the interface via touch input on the Surface is fiddly at best. Knobs tend to run all the way up or all the way down at the slightest nudge, and the hitbox for patch cable insert points is a bit small for your fingers on any touch screens smaller than 15”. Using a stylus is more comfortable.

Stability is impressive overall, even at this early pre-1.0 development stage. Crashes are exceptionally rare, at least on my systems – I can’t specifically remember the last one, though there’s been a few times the aforementioned crackles forced me to restart Rack. Restarting Rack is no big deal, though – on relaunch, it restores the last state of your patch with audio running, and more than likely everything is ok. Rack will mute lines causing feedback loops, a restriction which ultimately serves to keep your ears and your gear safe.

As part of my field work for this write-up, I decided to run a survey. The VCV Rack community is more approachable, open, and down to get dirty with problem-solving than any other software community I’ve participated in directly. I figured I’d get a handful of responses, with variations of “it’s Eurorack but on my computer and for free” as the most common response. 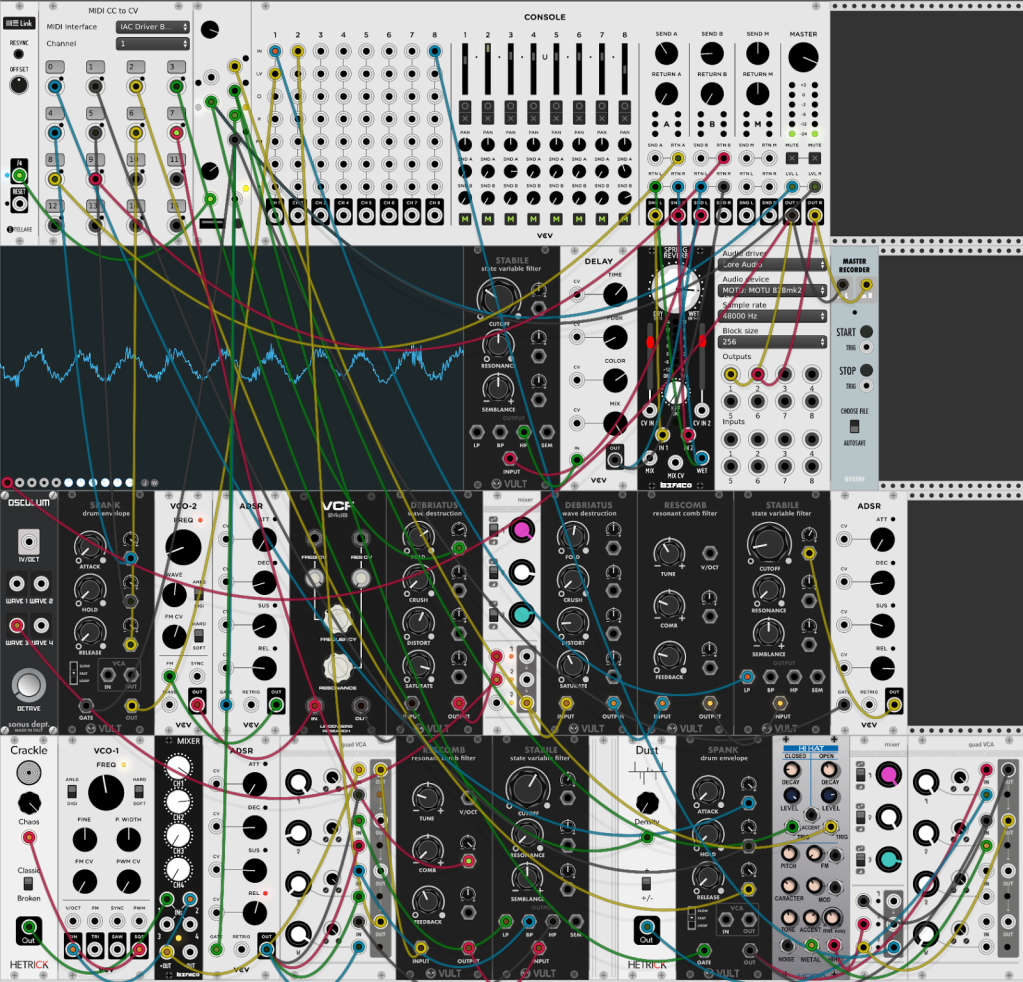 Almost every single one of our 62 respondents in some way indicated that they love hardware modular for its creative possibilities, but also see cost as a barrier. VCV Rack gets right around the cost issue by being free upfront, with some more exotic modules costing money to access. There’s also a solid chunk of users coming from a university experience with large modular systems, such as Montreal’s SYSTMS, who say what initially appealed to them was “getting to explore modular, whereas before that was just not available to a low income musician. I had been introduced to Doepfer systems in university, and since then I have of course not had access to any very expensive physical Eurorack set ups. Also the idea of introducing and teaching my friends, who I knew would be into this!”

(While Rack is especially hardware-like, I do want to shout out fellow open-source modular solution Automatonism – you won’t find anything like a complete set of Mutable modules, but you will find a healthy Pd-driven open source modular synth with the ability to easily execute away from a computer via the Critter and Guitari Organelle.)

VCV Rack can be used in as many ways as a real Eurorack system.

The Rack Github describes Rack as an “Open-source virtual Eurorack DAW,” and while I wouldn’t use it to edit audio, Rack can handle a wide enough set of roles in a larger system to fairly call the software a workstation. There are several options for recording audio provided by the community, with an equal number of ways to mix and otherwise manipulate sets of signals. It’s possible to create stems of audio data and control data. It’s possible to get multiple channels of audio into another piece of software for further editing, directly via virtual soundcards.

VCV Rack also has a home within hardware modular systems, with users engineering soundcard-driven solutions for getting CV and audio in and out of a modular rack running alongside VCV. User Chris Beckstrom describes a typical broad array of uses: “standalone to make cool sounds (sampling for later), using Tidal Cycles (algorithmic sequencer) to trigger midi, using other midi sources like Bitwig to trigger Rack, and also sending and receiving audio to and from my diy modular.”

8th graders can make M-nus-grade techno with it.

I mean, check it out.

If you build it, they will come.

For having been around only since early September VCV Rack already has a very healthy ecosystem of third-party modules. Devs universally describe Rack’s source as especially easy to work with – Jeremy Wentworth, maker of the JW-modules series, says “[Andrew Belt’s] code for rack is so easy to follow. There is even a tutorial module. I looked at that and said, hey, maybe I can actually build a module, and then I did.” Jeremy is joined by over 40 other plug-in developers, most of whom are managing to find their own Eurorack recipe. VCV Rack also has a very active Facebook community, with over 100 posts appearing over the three days this article was written in. I’ve been on the Internet for a long time – it’s unusual to find something this cohesive, cool-headed and capable outside of a forum.

Almost two thirds of our respondents have already purchased some Rack modules, or are going to be purchasing some soon. Only a handful plan not to purchase any modules. There’s a market here, a path to the market via VCV Rack, and a group of developers already working to keep people interested and engaged with both new modules and recreations of real-world Eurorack hardware. Two thirds of respondents is a big number – if you’re a DSP-savvy developer it’s worth investigating VCV Rack.

The portability of signal processing algorithms isn’t a phenomenon unique to VCV Rack, but it is my opinion, VCV Rack will be uniquely well-served by the ability to easily port DSP code and concepts from other plaforms. Michael Hetrick’s beloved Euro Reakt Blocks are being partially ported from Reaktor Core patches into VCV Rack, for example, and Martin Lueder has ported over Stanford’s FreeVerb as part of his plugin pack. As the community cements itself, we’ll likely only see more and more beloved bits of code find their way into VCV Rack.

VCV Rack are selling commercial modules. Pulse 8 and Pulse 16 are drum-style Sequencers, and there’s also an 8-channel mixer with built-in VCA level CV inputs. You’ll find them on the official VCV Rack site. Instead of donations, Andrew prefers people purchase his modules, or buy the modules of other devs. All the modules are highly usable, with logical front-panel layouts and powerful CV control. Ed.: This in turn is encouraging, as it suggests a business model pathway for the developers of this unexpected runaway (initially) free hit. -PK

An open Music Thing module has come to VCV. The Turing Machine mkII by Music Thing Modular released by Stellare Modular – A classic looping random CV generator, typically used for lead melodies or basslines, sees a port into VCV Rack by a third-party dev. Open source hardware is being modeled and deployed in an open source environment.

There’s now Ableton Link support. A module supporting Ableton Link, the live jamming / wireless sync protocol for desktop and mobile software, is available via a module released by Stellare. In addition to letting you join in with any software supporting Link, there’s a very handy clock offset. 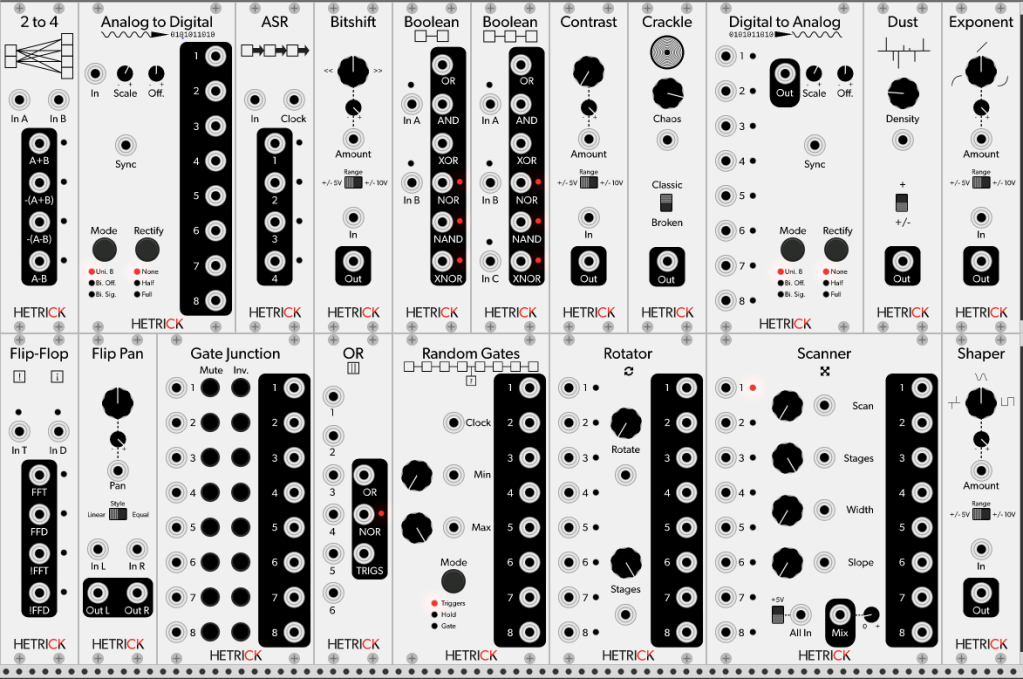 Reaktor to VCV. Michael Hetrick is porting over Euro Reakt stuff from Reaktor Blocks, and making new modules in the process. Especially worth pointing out is his Github page, which includes ideas on what to actually do with the modules in the context of a patch: https://github.com/mhetrick/hetrickcv

Hora’s upper class tools and drums. Hora Music is to my knowledge the first “premium” price module release, at 40euro for his package of modules. With a combination of sequencers, mixers, and drums, it could be the basis of whole projects. See: https://gumroad.com/horamusic

I’ll be back next week with a few different recipes for ways you can make Rack part of your set-up, as well as a Q&A with the developer.

Ted Pallas is a producer and technologist based out of Chicago, Illinois. Find him at http://www.savag.es/

How BeatMaker caught the iOS music trend before it even started