Various devices have tried to do what the computer does – letting you play, sequence, and clock other instruments, and arrange and recall ideas. Now, a new grid is in town, and it’s bigger, more capable, truly standalone, and open in every way. 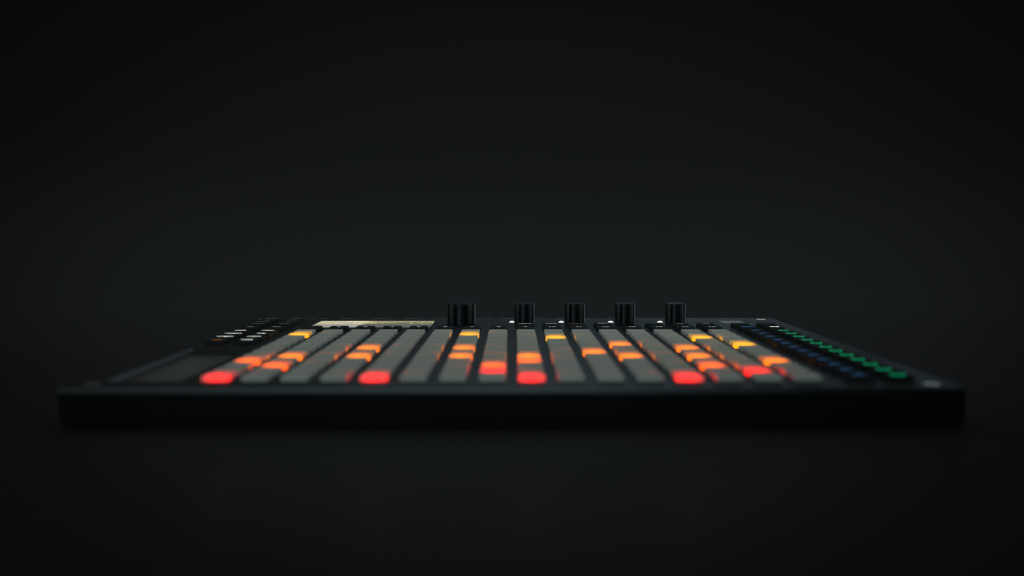 composer pro makes its debut today at Superbooth. It comes from what may seem an unexpected source – dadamachines, the small Berlin-based maker known for making a plug-in-play toolkit for robotic percussion and, more recently, a clever developer board. But there’s serious engineering and musical experience informing the project.

What you get is an enormous, colored grid with triggers and display, and connectivity – wired and wireless – to other hardware. It’s a sequencer for outboard gear, but it’s also capable of playing internal sounds and effects.

It’s a MIDI router, a USB host, a sampler and standalone instrument, and a hub to clock everything else. It doesn’t need a computer – and yeah, it can definitely replace that laptop if you want, or keep it connected and synced via cable or Ableton Link.

And one more thing – while big manufacturers are starting to wake up to this sort of thing being a product category, composer pro is also open source and oriented toward communities of small makers and patchers who have been working on this problem. So out of the box, it’s set up to play Pure Data, SuperCollider, and other DIY instruments and effects, extending ideas for standalone instrument/effects developed by the likes of monome and Critter & Guitari’s Organelle. That should be significant both if you’re that sort of builder/hacker/patcher yourself, or even if you just want to benefit from their creations in your own music. And it’s in contrast to the proprietary direction most hardware has gone in recent years. It’s open to ideas and to working together on how to play – which is how grid performance got started in the first place. 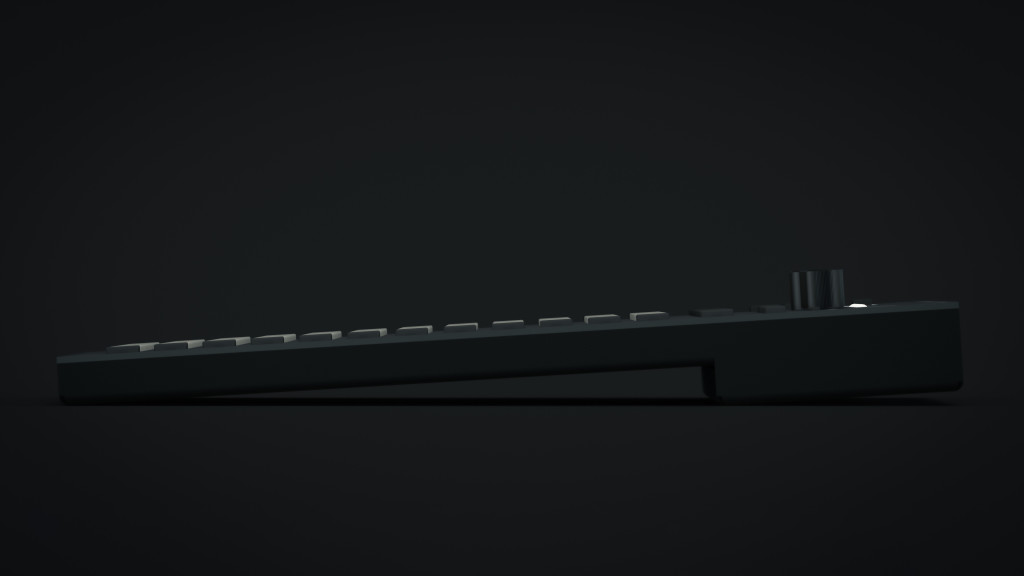 Disclosure: I’m working with dadamachines as an advisor/coach. That also means I’ll be responsible for getting feedback to them – curious what you think. (And yeah, I also have some ideas and desires for where these sorts of capabilities could lead in the future. As a lot of you have, I’ve dreamt of electronic musical performance tools moving in this direction – I love computers but also hate some of the struggles they’ve brought with them.) 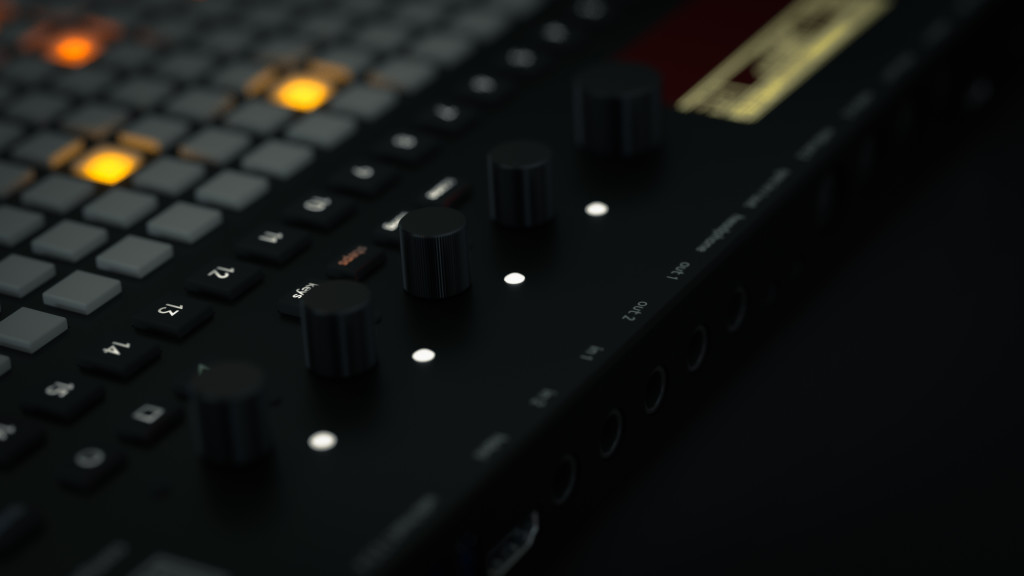 I hope you like buttons. Composer Pro has a 192-pad grid – that’s 16 horizontally by 12 vertically. Add in the rest of the triggers for a grad total of 261 buttons – transport and modes on the top, and the usual scene and arm triggers on the side, plus edit controls and other functions on the left.

For continuous control, there’s a touch strip. And you get a small display and encoder so you can navigate and see what you’re doing.

There’s computational power inside, too – a Raspberry Pi compute module, and additional processing power that runs the device. 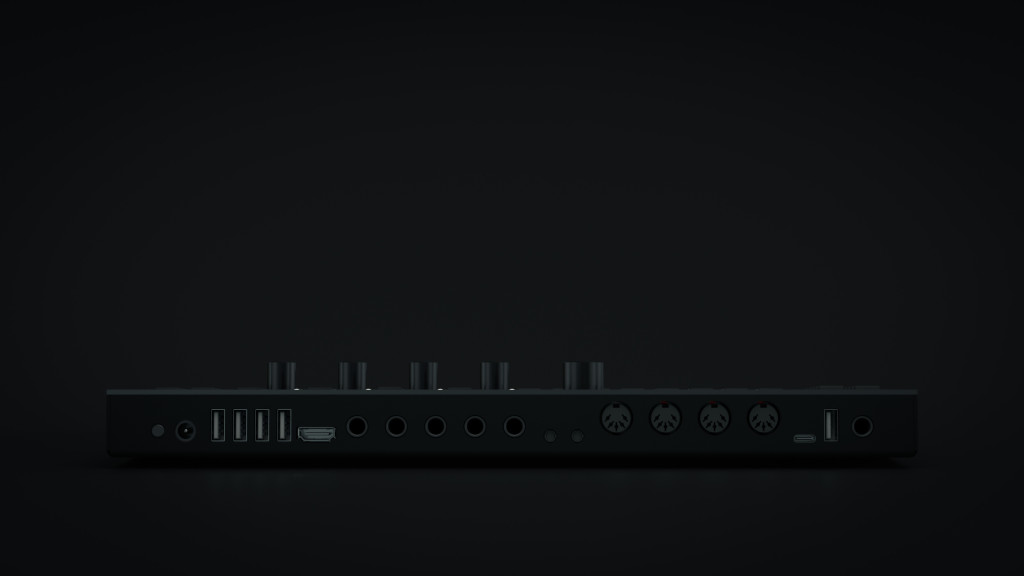 You get just about every form of connectivity (apart from CV/gate, even though this is Superbooth):

MIDI (via standard DIN connectors, 2 in, 2 out)
DIN sync (for vintage analog gear like the Roland TR-808)
Analog sync I/O (for other analog gear and modular)
USB MIDI (via USB C, for a computer)
USB host, with a 4-port USB hub
Ableton Link (for wireless connections, including to various Mac, Windows, Linux, and iOS software)
Footswitch jack

(There’s a dongle for wifi for Link support.)

The USB host and 4-port hub is a really big deal. It means you can do the things that normally require a computer – connect other interfaces, add more audio I/O, add USB MIDI keyboards and controllers, whatever. 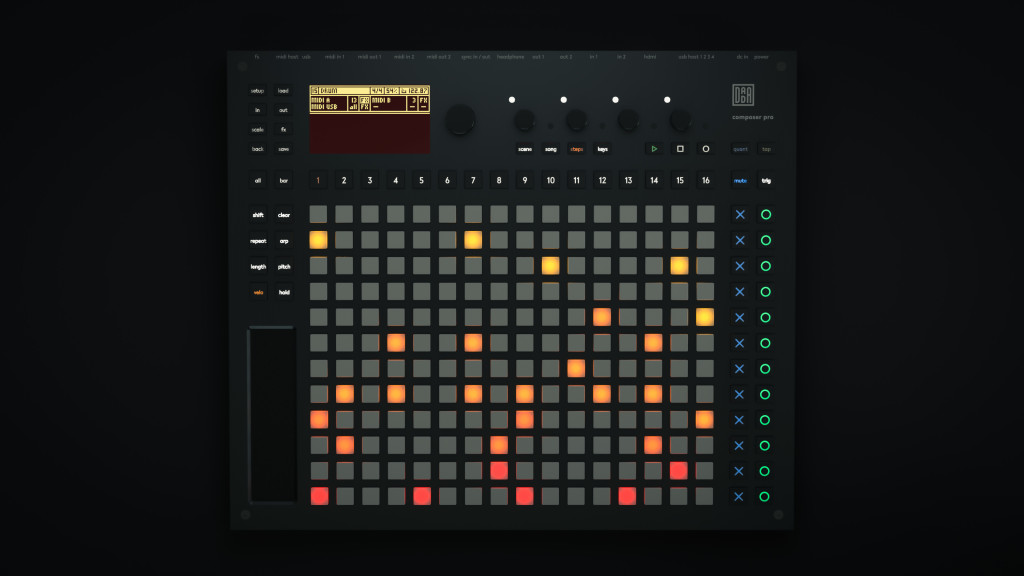 At its heart, composer pro focuses on sequencing – whether you want to work with custom internal instruments, external gear, or both.

You have sixteen slots, which dadamachines dubs “Machines.” Then, you can work with simple step-sequenced rhythms or mono-/polyphonic melodies, and add automation of parameters (via MIDI CC).

Pattern sequences can be up to 16 bars.

Patterns + Machines = larger songs. And you can have as many songs as you can fit on an SD card (which, given this is MIDI data is … a lot).

The beauty of dadamachines’ approach is, by building this around the grid, you can work in a lot of different ways:

Step-sequence melodies and rhythms in a standard grid view.

Play live – there’s even a MIDI looper – and use standard quantization tools, or not, to decide how much you want your performance to be on the grid.

Trigger patterns one at a time, or in scenes.

Use the touchstrip for additional live control, with beat repeat functions, polyrhythmic loop length, nudge, and velocity (the pads aren’t velocity sensitive, though you can also use an external controller with velocity).

Now you see the logic behind having this enormous 16×12 grid – everything is visible at once. Most hardware, and even devices like Ableton Push, require you to navigate around to individual parts; there’s no way to see the overall sequence. You can bring up dedicated grid pages if you want to focus on playing a particular part or editing a sequence. But there’s an overview page so you also get the big picture – and trigger everything, without menu diving.

dadamachines have set up four views:

Scene View – all your available Patterns and Machines

Machine View – focus on one particular instrument and input

Performance View – transform an existing pattern without changing it

And remember, this can be both external gear and internal instruments – with some nice ready-to-play instruments included in the package, or the ability to make your own (in Pd and SuperCollider) if you’re more advanced.

It’s already set up to work with ORAC, the powerful instrument by technobear, featured on the Organelle from Critter & Guitari:

– showing what can happen as devices are open, collaborative, and compatible.

When can you get this?

composer pro is being shown in a fully working – very nice looking – prototype. That also means a chance to get more feedback from musicians.

dadamachines say they plan to put this on sale in late summer.

It’s an amazing accomplishment from an engineering standpoint, from the hands-on time I’ve had with it. I know velocity-sensitive pads will be a disappointment, but I think that also means you’ll be able to afford this and get hardware that’s reliable – and you can always use the touchstrip or connect other hardware for expression.

It also goes beyond what sequencers like the just-announced Pioneer Squid can do, and offers a more intuitive interface than a lot of other boutique offerings – and its openness could support a community exploring ideas. That’s what originally launched grid performance in the first place with monome, but got lost as monome quantities were limited and commercial manufacturers chose to take a proprietary approach.

Stay tuned to CDM as this evolves.

composer pro is the new hub for electronic musicians, a missing link for sketching ideas and playing live. It’s a standalone sampler and live instrument, and connects to everything in a studio or onstage, for clock and patterns. And it’s open source and community-powered, ensuring it’s only getting started.

Edit patterns by step, play live on the pads and touch strip, use external controllers – it’s your choice. Sequence and clock external gear, or work with onboard instruments. Clock your whole studio or stage full of gear – and sync via wires or wirelessly.

Finally, there’s a portable device that gives you the control you need, and the big picture on your ideas, while connecting the instruments you want to play. And yes, you’re free to leave the computer at home.

composer pro will be shown to the public the first time at superbooth in Berlin from 9-11th of may. Sales start is planned for late summer 2019.

Use a massive, RGB, 16×12 grid of pads
192 triggers – 261 buttons in total – but organized, clear, and easy
Step sequence or play live
Melodic and rhythmic/drum modes
MIDI looper
Work with quantization or unquantized
Play on the pads or use external controllers
Touch strip for expression, live sequence transformations, note repeat, and more

Onboard sounds and room to grow: