It may have been in the temple of wires and racks, but Berlin’s Bitwig chose this weekend’s Superbooth to launch a public beta of their all-modular DAW, Bitwig Studio 3. It lets you wire together with hardware, or just inside software, or as a combination.

It’s called The Grid – and it’s all about patching inside your music workflow, so you can construct stuff you want instead of dialing up big monolithic tools and presets. And that sounds great to builders, I’m sure.

Going modular was really the promise of Bitwig Studio from the start – something to rocket the software from “oh, hey, I can run something kinda like Ableton on Linux” to … “wow, this is something really special.”

The idea is, get a music making tool that not only behaves like a set of tracks and channels, or a bank of patterns and samples, and more like a toybox that lets you built whatever you want from various blocks. And before anyone tries to launch another of those “hardware versus software” debates (yawn), a friendly reminder that computers used a modular generator model for digital audio in the late 1950s – years before any recognizable hardware modular was even a thing. (Okay, granted, you needed a stack of punch cards and access to an IBM mainframe or two and the user base was something like ‘people who happen to know Max Mathews,’ but still…)

Bitwig Studio 3 is in beta now, so you can toy around with it and see what you think. (Bitwig are very clear about not putting important projects in there.)

I wrote about this at the start of this year.

But now there’s a friendly video to walk you through how it all works:

Basically, think friendly musical blocks for pattern and timbre, pre-cords so things are patched easily, and powerful features with phase.

With Beta 1, we also see some specifics – you can produce your own stereo synths and effects with the two Grid devices: 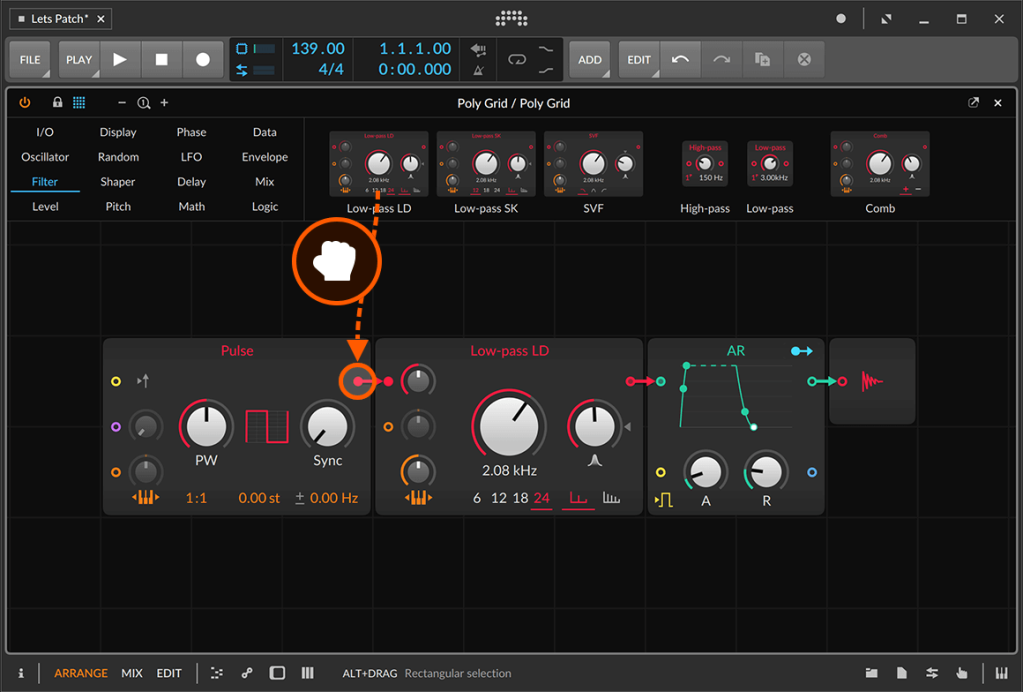 Patching may be a nerdy endeavor, but Bitwig’s design makes it much friendlier – and there’s already great tutorial documentation even in the beta.

Delay types – need to dig into these; they look promising

— all in all, it’s a really nice selection of tools, and a balance of low-level signal tools/operators and easy convenience tools that are higher level. And it’s also not an overwhelming number – which is good; it’s clear this should be its own tool and not try to replicate the likes of Max, SuperCollider, and Reaktor.

Also in this build:

And – a little thing, but you can view the timeline with actual time (minutes, ms) …

Beta users will find a really nice, complete tutorial so – you can start practicing building. Have fun!

Polyend puts presets in your modular – plus run on a battery, anywhere

CVmodular
Faded Instruments has a line of candy-colored 1U tools – easy modular stocking stuffers
CVmodular
The latest 1U tool is a DJ-style innofader crossfader from intellijel
MacSoftwareWindows
The best Cyber Monday deals you can get now on synths, plug-ins, and more
MacSoftwareWindows
MadMapper 5.2 is here, with more lasers! (and DMX CSV, Xbox controllers, and Kinect)