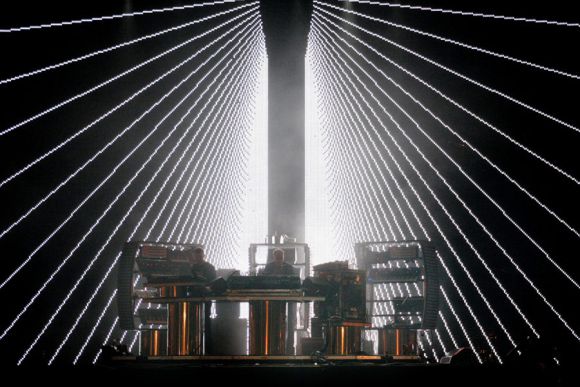 Here’s the latest from visualist superstars UnitedVisualArtists. UVA is “producers, directors and designers of performance video, environmental graphics and real-time software and for a variety of media.” They combine “art direction, production design and software engineering.” Oh, and they’re really light sculptors. And installation/media artists. And live performance visualists.

Their most recent performance collaboration is with Chemical Brothers. The visuals, as with all of their work, rely on their custom-built software Dragonfly. Dragonfly is not only able to generate visuals, but can conceive how those visuals fit into three-dimensional space, instead of being constrained to a basic video out / single, two-dimensional frame. It’s flexible enough that it works on their light installations, as well. Here, it pumps out more conventional (though lovely) generative visuals. Click here if you’re lazy, but even better is the higher-quality version on their site.

More on the Chem Bros:

We were commissioned by the ICA as part of their 60th anniversary celebrations to produce a special one-off live collaboration with The Chemical Brothers in Trafalgar Square. The project was supported by Becks, and filmed for later transmission by Channel 4. We augmented the Chemicals’ touring set (designed by Tom Lesh, with visuals by Flat Nose George;) with a constellation of powerful lights around the square, and created a set of generative, realtime graphics for the show finale — the tracks Hold Tight London and crowdpleasers Leave Home and Block Rockin’ Beats.

What’s really impressive about their work is their ability to pursue rigorous minimalism and technical sophistication at the same time, without ever feeling cold or opposed to the sensory experience of the material. It’s something you might miss if you just see one of their light sculptures, but this sense of their aesthetic vision really emerges as you look at the whole body of their designs. And in case you haven’t been following UVA, there’s more. A lot more.

You can check out more UVA videos at their YouTube page:
The Work of UnitedVisualArtists

For Massive Attack, they had still more tricks up their sleeve:

For our third Massive Attack tour, we created a more organic, audio-responsive show presented on a hemispherical screen made of ultra-bright beamer LEDs. Visuals for the track ‘Group4Ã¢â‚¬Â² were designed by SamuelChristopher. Conventional lighting direction by Vince Foster.

A personal favorite of mine is this music video, which played upon the imperfect output of a three-dimensional camera. It reminds me a bit of the Rutt-Etra work we’ve been discussing:

Pursuing our interest in the beauty of digital errors, we produced our first Music promo for this Paris-based electronic act, signed to Trevor Jackson’s Output Recordings. Singer, band and subject are revealed as fragile, paper-thin digital facsimiles, distorted and corrupted by the machine but rendered from unusually intimate perspectives.

Where to Find Out More About UVA

To really understand how their magic works, artistically and technically, it’s well worth watching this full video. When they say they use custom software, they aren’t kidding: Dragonfly is a full-blown visualist tool, produced from scratch.

For still more:
Interview with UnitedVisualArtists [we make money not art, 2006]

A big thanks to Chris O’Shea, who would probably have written this up himself on his wonderful blog Pixelsumo if he weren’t too busy making great digital art himself.

DScratch: Warp, Scratch, and Mess with Audio on Nintendo DS