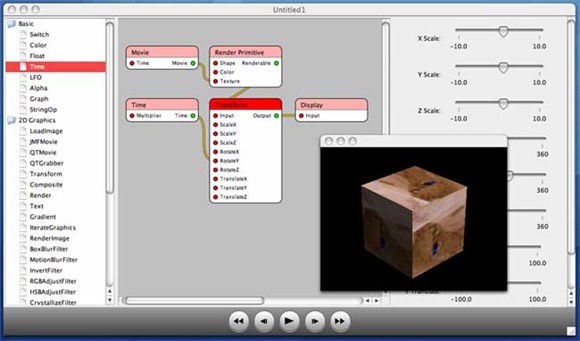 It’s still early in development (read: it often crashes), but The Bean Machine applies nodal, patch-based development to Java. The interface is mysteriously close to Quartz Composer, down to capabilities, UI, and even the 3D cube tutorial. Personally, I use Java because it can do things Quartz Composer can’t, but it’s interesting nonetheless — and raises, again, the question of why we don’t see more tools that try to meld the capabilities of code and patches.

The cool bit: nodes are Java Beans, so you really could use this to combine the best of both worlds if it matures. No download yet, but we’ll be watching … perhaps it will inspire other developers, as well.

The project is labeled “experimental”, but could be worth a look. Developer Jerry Huxtable has lots of other goodies for Java-heads on his page, including lots of 2D image processing stuff and a map editor — Processing lovers, might want to pop this into your del.icio.us.

Richie Hawtin Now Uses Traktor; Does That Make it Ubercoolische?