GrandVJ is the live visual world’s best secret at the moment. Maybe it’s the software’s streamlined feature set or simple-looking UI, or maybe hard-core visualists had come to associate the name “ArKaos” with the company’s previous product, which recently had indeed started to look long-in-the-tooth before GrandVJ finally replaced it. But here’s the reason GrandVJ is worth your consideration: it plays back video and it’s rock-solid and fast while doing it. And I’m happy to sacrifice some whiz-bang features to accomplish that.

Here’s a CDM exclusive: GrandVJ’s playback envelope is about to get pushed still further. ArKaos’ MediaMaster DMX-compatible media server will get a significant 1.1 update with reliable support for video playback up to 60 fps soon. (That’s 60 fps playback of two movies.) This much is revealed today by our friend nostromo, ArKaos’ Software Architect, on the company blog. But MediaMaster is a whopping EUR1949.

The good news is, following the MediaMaster update, GrandVJ is also due to get the enhanced playback capabilities, for mixing video at true 50 fps – 60 fps, without dropping frames.

The sample uses two videos, but in tests the engine has mixed up to three 1080p videos and a Flash video on top of that, all at 60 fps, when running on a powerful media server machine. (Videos that large start to hit the real current bottleneck, which is drive throughput.) The test labs at ArKaos have also been displaying across three monitors with a TripleHead2Go multi-display box from Matrox, which, incidentally, you can even run off of a laptop if it’s got enough muscle. (Marc reports lately MP2 has been a favorite format for them.)

There are lots of variables in performance, but the key in this case is that the engine in GrandVJ will be capable of greater frame throughput, maintaining high framerates even with multiple media. Other factors are dependent on your hardware setup and the video source you’re using.

Let’s step back, though – why would you want to run 50-60 fps in the first place? Well, for starters, because you can – projectors and displays can run natively at that refresh rate, so you’ll get jitter-free, smooth displays even at these higher framerates. But beyond that, it’s worth getting these higher framerates because they really can look better. Video looks smoother and more lifelike at 50 or 60 fps, and it’s not hard to acquire lovely-looking 60 fps video these days. (Cheap portable flash cameras and the PS3 Eye, for instance, run comfortably at 60 frames.) Just as importantly, GrandVJ’s effects will run at the same rate, so you can pull off fast-paced visuals on texture-mapped 3D objects. Games and animation typically run up to 60 fps, so motion that may look more natural, even if you’re capturing source to video (more on how to do that in a moment). And lastly, suffice to say that the engine optimizations necessary to improve frame throughput at the higher rates means you’ll be really, really comfortable if you’re still running 25-30 fps. 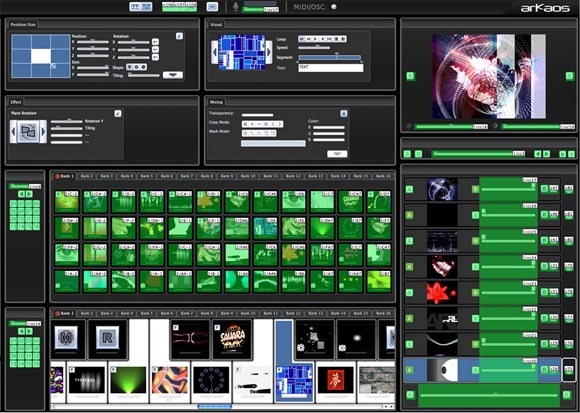 The GrandVJ interface, running all eight layers at once, with an expanded view of the MIDI keyboard layout interface at the bottom.

Speaking of higher frame rates, I just want to echo the side excursion in Marc’s blog post, which is to sing the praises of the screen capture utility FRAPS.

FRAPS is a Windows-only utility used for high-performance, lightweight motion and sound capture. It supports both DirectX and OpenGL. FRAPS is well-known in the game community for its use in capturing video in games. Now, suffice to say, any utility capable of capturing live video streams from a game – typically far more intensive on the GPU than anything any of us do with live visuals – is going to work just fine for us. FRAPS is actually resource conscious-enoguh that it’s used in benchmarking, too. In his blog post, Marc notes that he can run MediaMaster’s 1024×768, 60 fps video and capture in FRAPS at the same time.

Spend the US$37, and get unlimited updates, which are released frequently. It’s an absolute no-brainer. 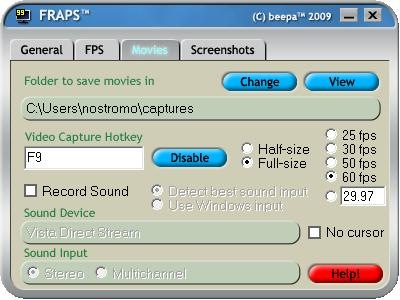 FRAPS is so good, in fact, it’s a reason to run Windows – if even on a separate partition on your Mac. Using FRAPS and Windows in general could each make their own posts, but I’ve been impressed with Windows as a live visual operating system, at least once you get a stable version of your video driver of choice. I think you get strange looks when you mention Windows in creative contexts, but while I’m not exactly a Microsoft fanboy (ahem), the thing can work pretty darned well, as I’d hope for the PC operating system used most often for hardware-crunching games.

Anyway, seeing is believing, and Marc packs a number of good tips into his post, so even if you’re not a current or prospective GrandVJ user, definitely don’t miss the story:

Software
MIDI Polyphonic Expression has been updated with one powerful feature: better documentation
tips
Hands-on tour of the Oberheim OB-X8 architecture, feature by feature, with Francis Preve
Mac
May the 4th be with you, in a new documentary on the sounds of Skywalker
tips
Quick tips: changing oscillators while live jamming with Arturia MicroFreak