More than a gimmick, projection mapping – calibrating visuals to various projection surfaces in 3D – has become an essential technique in live performance visuals. That means visualists will inevitably be looking for tools that help them project on things other than flat rectangles.

At Switzerland’s Mapping Festival this month, one such tool made its official public debut. MadMapper comes from the creators of Modul8, a tool that already has some mapping features in it. A demo version is available for Mac users, with licenses for two computers at EUR299. Documentation is scant at this point, but we’ll be looking more at this software as it evolves – doubly so as it makes use of the inter-app, open source Mac visual framework Syphon, which we’re tracking closely.

Because it works with Syphon, it can also be used with a wide variety of visual tools, from Processing and OpenFrameworks to more conventional, end-user-focused VJ apps like VDMX (as well as, of course, Modul8).

You can get a rough idea from the screenshot and basic tutorial: 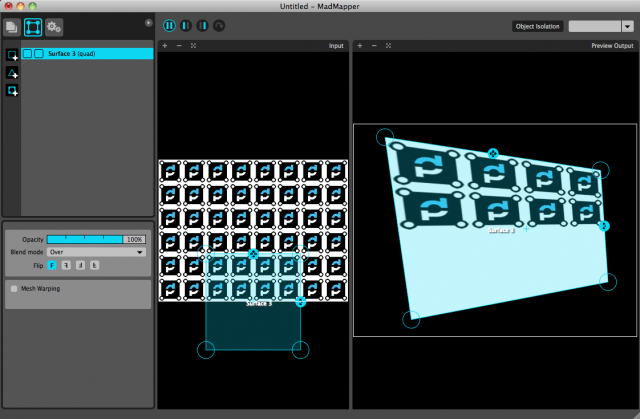 Here’s a quick look at some of what it can do in video form. There’s a 2010 mapping project on a tennis court, at top. It’s the product of collective 1024 architecture, whose work I recently celebrated on Create Digital Music.:
With Neon Guitars and Immersive Projection, 1024 Architecture Become Audiovisual Rock Band

There’s also, from Ilan Katin and the project’s originator, a one-night installation in Berlin, below, and video of Laurent Garnier from this month at bottom by Paradigm Collective (using a more recent iteration of the software).

But perhaps the coolest part of the whole launch is the fact that they were able to mix cocktails with DMX-controlled blenders. Wasting away again in DMX…

Finally, we’ll close with some of the goodness from the Mapping Festival Party. Wish I could have been there.

An Album That Can Be Heard Only in One Location, in Interactive Ode to Washington, D.C.

3D
Percussa’s SSP Eurorack powerhouse does 3D, plugins, SDK – and kind of everything
Mac
May the 4th be with you, in a new documentary on the sounds of Skywalker
MacSoftware
NAP 0.5.0, free realtime visual tool, adds GPU computation, Web, RasPi support, new look
Software
Sinevibes Corrosion v2 is like 10 distortion pedals inside your KORG synth – made in Ukraine