Trips through Europe are just a bit more trippy with the aid of Scottish visualist Konx-om-pax. His visuals will be along for the ride as Hyperdub’s Laurel Halo makes her way through Europe this fall, the perfect foil to her dubby experimental machinations live. At just 26 years old, the artist has fitted his strange, colored oscillations of 3D goo to some bass music giants, with beautiful results. Here’s what the folks behind Laurel Halo have to say about this latest collaboration, as she launches her autumnal tour:

[The] AV [production] has been made in conjunction with Tom Scholefield aka Konx-om-pax, a multimedia artist from Glasgow who has made video and graphic work for Warp, Hyperdub and artists such as Hudson Mohawke, Martyn, Lone, Kuedo and King Midas Sound and recently released an album on Planet Mu as well. Of his work with laurel Tom says; ‘I wanted to create other worldly environments filled with gravitydefying plasma sculptures, beams of light shining through misty organic mutant plant life. Alongside floating metallic space station very much inspired by Moebius and Ron Cobb’

It’s worth saying something about the abstract loveliness of Scholefield’s work generally, as he has quickly built a distinctive visual language for himself. It’s entirely organic, and handmade in his digital works.

Prints by Konx-om-pax, for Warp Records.

There’s a raw, naive quality to Sholefield’s visual imagination, one that pulls back elements to the most striking beams and splotches of colored three-dimensional forms. I was back and forth on the faux film-grain in the Laurel Halo trailer, but I’ve grown to love it after repeated viewings; it brings an awareness of the surreal hallucinations in 80s and 90s movieplex trailers – you know, the ones with the jazzy music that come on and remind you to be quiet and considerate and use the fire exits before the film comes on.

But amidst all these infusions of colored liquid and sparse geometric forms oozing and interrupting planes, there’s always a sense of graphic order and cohesion. And the fact that it’s sometimes wrapped in the kind of gauzy, retro-cool filters that the musical artists favor somehow doesn’t dilute the impact of that.

Seeing this in a live musical show should be a real treat. Have a look at some of the highlights of those other collaborations – and keep watching, as we eagerly await what’s next to come out of this Glasgow artist’s head.

An epic for Hudson Mohawke:

Earlier work (two years old), but I love the seeds planted in this short:

Melted Zone from Konx-om-Pax on Vimeo.

And, of course, the obligatory reel:

And, oh yeah, Konx-om-pax is making music, too. A review, some listening:
Spotlight: KONX-OM-PAX

Europe, if you’d like to see and hear Laurel Halo – and I think you would – mark your calendars: 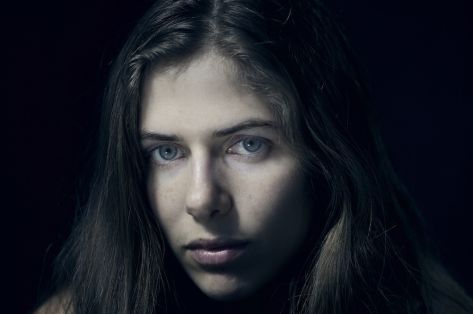 Listening, Behind the Scenes: Phoebe Kiddo, Traveling Through Earth and Space