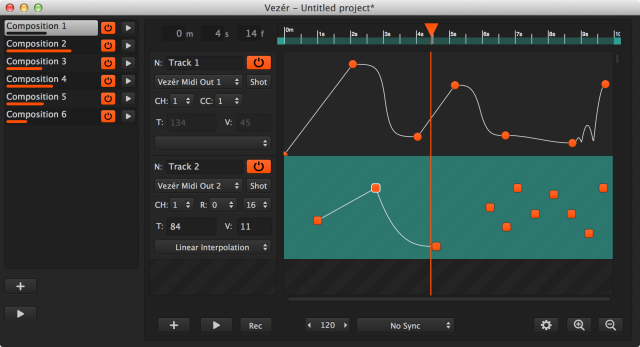 Take your visual app. Take a parameter. Now control it with timelines and automation – anything, anywhere.

Vezér isn’t the first app to go this direction, by any means. I’ve admired in past the insanely-powerful IanniX, for instance. But then, “insanely powerful” isn’t always what you want – particularly if that depth just drives you insane trying to do something simple. Vezér, just now entering beta, promises to be a bit simpler. And coming from the developer of CoGe, it also arrives from a coder with a track record.

We’ll be watching for this to come out, but in the meantime, its creator gives CDM a first look. Details:

Vezér is under development, no public beta available yet.
You can have any number of compositions and each composition can contain any number of tracks.
There are different track types in Vezér, like single Midi CC message or Midi CC range.
Vezér supports Undo/Redo in the whole application and also supports Copy/Paste of keyframes.
The playback speed of a composition is adjustable and can be synchronized with a Midi Clock.
The resolution – FPS – of a composition can be set.
Vezér supports sending of Midi CC messages.
Different interpolation can be set for each keyframes.
Vezér support recording of incoming Midi signals.
Vezér can be controlled via Midi or OSC.
Vezér is a 64 bit application for Mac OSX 10.6 or later.
Vezér will be a commercial application.

Developer Tamas Nagy explains that ease was part of his goal:

And maybe that is the key of Vezér. I really trying to make it very easy to use but also powerful. My goal is keep it simple at possible, I want to users feel its just a tool, not something other complex 3rd party software which needs a lot of time to setup 🙂 That why I chosen MIDI support instead of OSC for the release, because it -almost – does not need to anything to make it working – but yeah, OSC will be supported in a future release for sure. And other important thing from my point of view, its not “just” a timeline, where you can set up when your clips will be triggered, but more likely a tool for setting up predefined MIDI actions for your performances. Likely in this article, but without recording – sending actions to applications:

Ah, color me interested on that. Keep up with the latest on the new app site:

In Berlin, Mixing Learning with Hacking and Jamming, All With Free DIY Tools